Dieting is a chancy undertaking. The sad truth is that most people who attempt to lose weight end up gaining it back.

In fact, at last count, there are only five people on the entire planet who have permanently lost weight, but even that pathetically small number is suspect because one of the successful dieters choked on a bolus of undercooked quinoa, thereby killing him before he inevitably gained back the weight he'd lost.

Alright, maybe the success rate is a little better than that. Still, dieters generally gain back the weight they lost. This cycle of losing and gaining weight has been coined "yo-yo" dieting and it's a head-scratcher for scientists, nutritionists, dietitians, and fatties alike.

There is, however, a type of "yo-yo" dieting that actually works, at least according to Australian scientists. People employing the method lose a significant amount of body fat and they appear to keep much of it off, even after going off the diet.

The researchers recruited 51 obese men and divided them into two groups. All were put on low-cal diets that provided 67% of their daily calorie expenditure.

In other words, the latter group would yo-yo between two weeks of reduced calorie eating and two weeks of eating maintenance calories (the amount of food required to keep them from losing or gaining weight).

But the experiment didn't end there. The researchers continued to monitor men in both groups for a period of six months. Both groups regained some weight, but weight loss in the men in the intermittent group was 17.9 pounds greater than the control group.

The scientists, in mulling over the results, figured that "the attainment of energy balance during the 'breaks' from energy restriction may be critical to the approach," and that the breaks probably attenuated the decrease in resting energy expenditure that are typically seen in traditional calorie-restriction diet.

In a typical calorie-deprivation diet, your metabolism likely adjusts to the decreased calorie intake and your weight loss slows or halts completely.

Typical intermittent-fasting diets are often flawed, too. They require you to fast for a while and then eat "normally" for a truncated period. The trouble is, most people tend to have a "hyperphagic" response to this time-out in their dieting.

All that denial of food during the dieting phase causes them to oink out during the non-dieting phase and it ends up being a two forkfuls forward, one forkful back approach that often leads to disappointing results.

It was undeniably successful, but why the intermittent calorie reduction approach worked better than the conventional calorie deprivation diet in keeping participants from yo-yoing back to their pre-diet weight is somewhat of a mystery, though.

Regardless, the take-home doggy bag message is that if you want to follow a calorie restriction diet, it seems the intermittent approach is the way to go.

Think potatoes are "bad" carbs because of some study you heard about? Turns out the studies were bad, not the spuds. Here's the truth.
Feeding the Ideal Body, Nutrition & Supplements, Tips
TC Luoma January 17

Eights fruits and vegetables you should be eating… whether you like them or not! Check out the list.
Diet Strategy, Feeding the Ideal Body, Nutrition & Supplements
Lonnie Lowery, PhD June 30 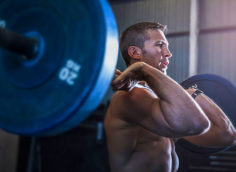