Thanksgiving was a fatty, sugary good time. I've never been one to do the old "modified recipe" thing when it comes to traditional holidays. Mashed potatoes and gravy, eggnog, pumpkin pie – it's all good to me. Who cares what's in the eggnog? So what if that pie crust is made with lard? If this shocks you, consider this: A single day isn't what makes Americans fatter every Holiday Season. In fact, many striving, over-dieted bodybuilding enthusiasts could use a good calorie and nutrient load once in a while.

The real problem, as I see it, lies in the fact that Thanksgiving... and Christmas... and New Year's Eve are not singular, isolated events but rather an amalgamated, eight week, drawn-out "season" in which our usual tight routine goes out the window.

Time off from work, crappy gym hours, shopping, leftovers from office and family parties – these things are ongoing affairs. It's like a six to eight week, unplanned "anti-diet," pushing us towards major doughboy status. Are the physiques of Kris Kringle and Frosty a fluke? I think not.

Okay, okay, that last comment was weak but you don't have to be. Let's take a look at five quick ways to dodge the need for strict dieting this December while minimizing the physique-damaging effects of the Holiday Season. Staying reasonably lean is a good idea (less treadmill work next Spring!) but there's no need to become a freaking prude either...

1. Stock your house or apartment end tables with high fiber crackers, Slim Jim-type lean beef snacks or better still, mixed nuts. The real test takes place at the grocer BEFORE you bring the stuff home. Keeping potato chips and candies out of the house is like a preemptive strike if you plan to ditch work and relax. Then if you want to munch away as you watch old Christmas videos, you've got good choices within reach; eat up!

2. Regarding crappy gym hours, either A.) Schedule around it with extra days in-a-row prior to the holiday shut-down or B.) Bundle up and get outside that day (or three): skiing, sled riding, and even taking brisk morning walks after a hot cup of coffee (or three) all reduce the need for excessive dietary restriction from an energy balance point of view. Did you know that the body tends to oxidize ("burn") more fat in cool/ cold temperatures?

3. Keep a bag of satiating, low glycemic index apples and a box of low-fat high-fiber crackers (and perhaps a protein drink or other snacks listed above) in the car and consume some as you run around shopping. The "car" part is critical. The fast food purveyors have already started heavily pushing coupons in the Sunday paper in my area. They know that you'll be hurried, away from a kitchen and therefore weak while out shopping – so snack on choices YOU make, not them. It's not even a holiday yet so tell them to Mc Stuff It!

4. Eat one of those apples 30-60 minutes before going to a huge party that isn't on a specific holiday (say, one of the "big three") and has a menu beyond your control. There is cool research, in part contributed by my friend/ colleague Steve Hertzler, that the effect of an apple's fructose on one's liver beneficially affects the metabolism of a subsequent starchy meal.(1) Why not enter the party in a physiological and psychological state that can help you deal with the inevitable massive spread of junk foods? That simple apple or other small snack may help you feel more full and thus resist over-indulgence.

5. As far as party leftovers, smile and accept them if you must, then go home and ditch them! You heard right. Are they really worth keeping around before or after the holiday? Would you eat this type of stuff during other times of the year?

See? That's not so hard. No official dieting or restrictive portions are required. We've dodged the need for such heroics. These five ways to work smart – not just hard – may just be your Holiday Holy Grail. Some forethought can really help eliminate the need for paranoid self-deprivation or the resulting guilt of perceived "failure" when you do indulge.

So there you go, my fellow holiday-hassled T-men and T-Vixens. Wacky schedules, shopping frenzies, and a cornucopia of sugary, greasy delights don't have to ruin you. Nor do you have to fear them and start acting like a portion-controlling, guilt freak. You can stay in control during the "other 24 days of Christmas" with a little prior planning. And remember, it's these non-holiday periods that really do the cumulative physique damage – not the big day itself. (For those who care, I delve into this "non-dieting diet" concept further in a future article named "Diet Planning for the Long Haul.")

Personally, I plan to fully enjoy my eggnog and pumpkin pie when the big day arrives – but ONLY on the big day. Goodies containing lard, sugar and ethanol aren't always bad and I say God bless them, every one – at least on those few days of the year I actually consume them. Homemade pastries with all their flakey goodness help make a holiday a holiday for me. 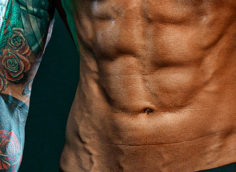 Oh sure, laugh it up. But you'll desperately want to know these tips when you get constipated. Here's how to get regular.
Feeding the Ideal Body, Nutrition & Supplements, Tips
TC Luoma August 20

A better way to cycle carbs, one that allows you to have your cake and eat it too, literally.
Carbohydrate Control, Diet Plan, Feeding the Ideal Body, Nutrition & Supplements
Mike Roussell, PhD February 8