The classic definition of insanity is "doing the same thing over and over again and expecting a different result."

While it makes for a witty sound bite to drop at a party or on a message board, as a true definition of mental illness it's probably a little incomplete; otherwise, 2/3rdsof the people you see toiling away in the gyms are basically bat-shit crazy.

Most bodybuilders are notorious creatures of habit and stick with the same exercises, sets, reps, etc in much the same way as they eat the same dozen or so foods that "work for them" day in, day out.

But what happens when those exercise staples no longer work? Virtually every non-professional bodybuilder has at least one or two bodyparts that they would classify as "weak points" – is it not insane to think that just doing more of the handful of exercises you're already doing will somehow kick-start a massive growth spurt?

To get a stubborn bodypart to respond you sometimes need to think outside of your everyday training toolbox and get a little creative. So T NATION has recruited coach Nick Tumminello to offer up some new ideas for training that will in turn bring you new muscle.

In each installment of the Unconventional Workouts series, Nick will present a new, challenging, and effective workout for a specific body part.

But just in case your "gimmick alert" alarms are going off, take heed: although each of these workouts will be new to you, they aren't new to Coach Nick. Each workout has been battle-tested and certified effective by the Coach himself at his Performance U training facility in Baltimore, MD.

So, lets get started with how to train biceps, Coach Nick T style!

Before I get into the specific workout program, I have a few interesting and helpful things to tell you about biceps training.

Many sports coaches don't think specific arm training protocols are very functional or have much carryover to sports performance. I completely disagree!

Ever try to run fast or jump high with a strained or torn biceps? You can't, because the biceps play a functional role in both those activities.

The best sprinting coaches will tell you to keep your elbows at roughly a 90-degree bend while you sprint. What muscle do you think is responsible for making this happen?

Plus, what's more functional than holding an object in front of your body? That my friends, is a biceps curl.

These examples prove the biceps are indeed involved in important aspects of athletic function.

Biceps Training for Grappling and MMA

Put simply, specific biceps training is a must for ALL grappling and combat athletes. Everything from pulling a submission to attempting a take down to throwing a hook punch heavily involves the biceps, and therefore demands the muscle to be strong.

I covered this in the second Mythbuster's article here.

It's All About Angles!

Here's a quick lesson in biomechanics that will help you save time and get much more out of your biceps training.

If you're doing biceps curls using a cable column, the cable itself is the load vector. The point of maximal loading to your biceps here is when your forearm makes a 90-degree angle with the cable.

It's interesting to note that different exercises will create a maximal force angle at different points in the range of motion.

Example: compare the angle of these two biceps exercise. 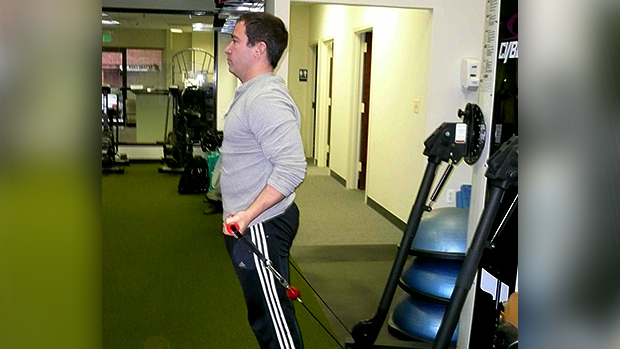 The low cable curl with a posterior cable vector creates a 90-degree angle very low in the range of motion (ROM). This maximally stimulates the lower portion of the biceps as they insert into the elbow joint.

Now, take a look at this high pulley biceps curl. 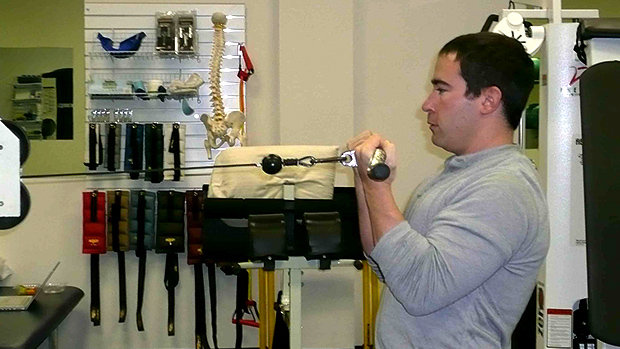 See how the 90-degree angle is created much higher in the ROM? This maximally stimulates more of the "peak" or higher portion of the biceps.

This is important to know because you can use it to make smarter exercise choices and get a better, more well-rounded biceps workout. So be sure to find multiple ways to change the point of maximal loading, and use exercises that create that the 90-degree angle at different points in the ROM while doing biceps curls.

Grab the Handle this way for Bigger Biceps!

Look at any anatomy book and it will tell you that the biceps are not only elbow flexors, but they're also wrist and forearm supinators. So, the best way to ensure maximal biceps recruitment, in addition to what I described above, is to hit both elbow flexion and forearm supination.

Here are two very simple and incredibly effective ways of getting this done: 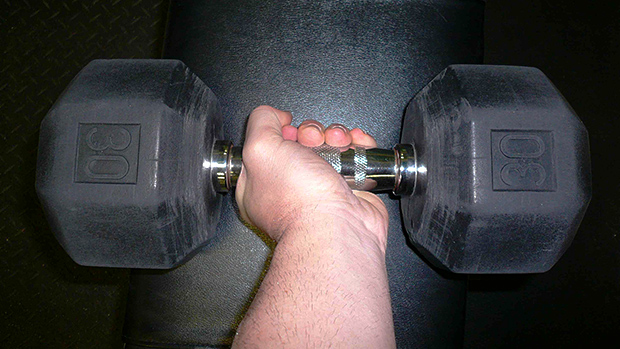 Instead of gripping the dumbbell from the middle of the handle as shown. 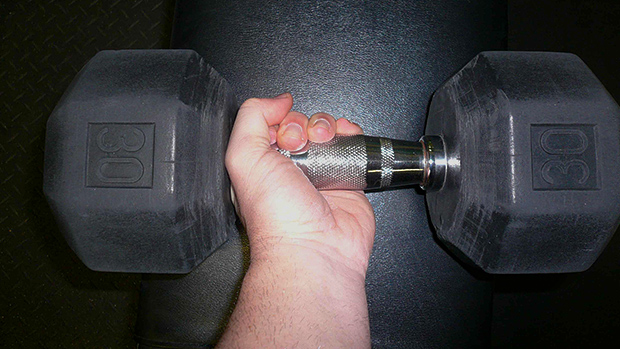 Grip it all the way to one side. Grip toward the thumb side with you hand as far to this side as possible. This will force you to resist forearm pronation by using more of your biceps supinators while you perform curling exercises.

This same strategy can be applied to cable curls. 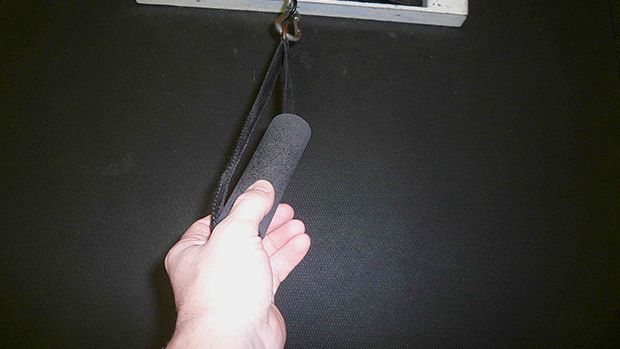 Find a PVC style cable handle and pull it to one side. 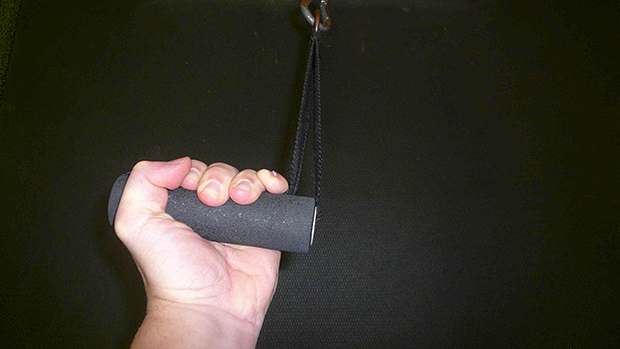 Now, grab the handle so the strap is coming out the same side as your pinky finger. This will again cause more biceps recruitment because you have now added an element of resisted supination to the biceps curl.

Give both of these new gripping strategies a shot. I can promise that immediately after trying them, you'll feel a much better biceps pump.

Now that I've schooled you on some unconventional methods to use when training biceps, lets talk about how to use these strategies in a comprehensive workout program.

This workout is based on the concept of changing angles as described earlier.

We're going to start the workout with hitting the biceps from the shortened (contracted) position, because that's where they and all other muscles are usually the weakest. We'll then progressively move to hitting the muscle closer to the lengthened position. In other words, as you get fatigued, you do exercises that give you more of a mechanical advantage.

This workout is a personal favorite of mine! It's called the 60/30 protocol. Believe me when I say that your biceps will have never felt so swollen and pumped as they will after this workout.

You're going to need a heavy-duty band for this workout. The one I use in the video is 1-inch wide. I use a band because it allows you to move fast without gaining its own momentum. I recommend using a 1/2 inch band for weaker individuals and a 1-inch band for stronger folks.

This workout involves using a rope to perform pull-ups as shown in the picture. This exercise is great for grip and biceps training along with the other upper body pulling muscles. 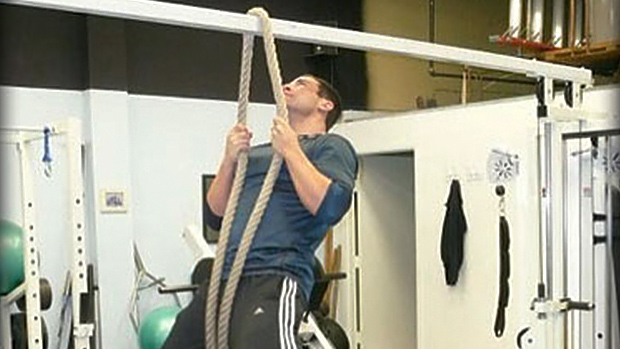 If you don't have access to a training rope like this one above, simply throw a triceps rope over the top of a cable machine and you're good to go! 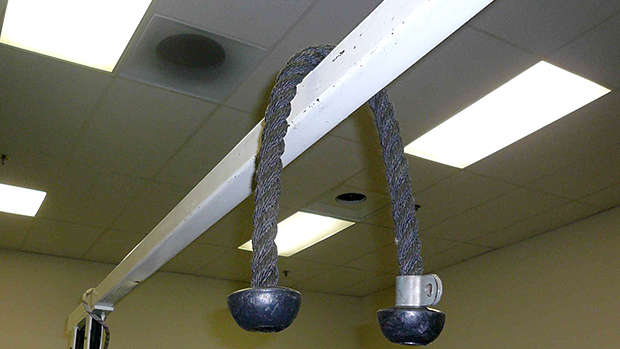 This is a spin on the classic biceps training method 21's, popularized by Arnold Schwarzenegger and adopted by virtually every young basement trainee before he was old enough to even count to 21.

Of course, these are all done without putting the weight down.

I know what you're all thinking: Three new biceps workouts are great, but how do you squeeze all that into your standard training week?

Simple. Just quit training the rest of your body and only train biceps! See you next month!

Kidding, of course. You don't need major changes in your current split to take on this kind of specialization program.

I would start with training biceps 3 times per week, and back off to twice per week if your elbows start giving you trouble or your other "big" lifts seem to be affected in any way.

For those of you on a different split or following the menstrual cycle (3 days on/ 28 days off), just throw any of these workouts onto the end of an upper body workout or perform them as a stand-alone workout.

As promised, I hit you with three killer workouts that will have your biceps inflated to almost the same hugeness as your ego!

See you next time! 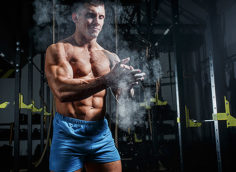