Now that the New Year is upon us, many people are looking for
effective ways to regain the size and strength they might have
inadvertently lost. After all, it's damn tough to stay
on track with your training during the months when that jolly,
red-suited fella who looks suspiciously like a wino shows up in the
middle of the night. (No, I'm not talking about your Uncle
Steve.)

For most of you, your posterior chain work was probably limited
to deadlifting your inebriated grandmother off the linoleum kitchen
floor. Well, I'm here to eradicate your holiday atrophy by
introducing a training method that's been around for as long
as strumpets have roamed the streets of Rome. It's been around
for so long because it works... damn good.

I'm talking about partials. But not just any partial
movement. No siree, Bob. I'm talking about heavy partials
– really heavy. After all, the whole point of doing a partial
movement is to load up the plates quicker than Rosie O'Donnell
does at a Mexican buffet. This abrupt augmentation in loading will
be shocking to you, your muscles, and your nervous system. And
you'll get bigger and stronger as a result.

The sole purpose of any size and strength building workout
should be to recruit as many motor units as possible. According to
most experts, there are three ways to do this:

2) Lift a submaximal load as fast as possible

3) Lift a submaximal load to failure

For most of us, the idea of lifting a maximal load sounds most
appealing. Sure, speed training is underrated and extremely
beneficial, but it's not the greatest ego booster in the world
since it must be accompanied by a relatively light load. But wait,
you don't care about boosting your ego, right?

Well, you should. Here's why: confidence in the weight room
begets bigger muscles. I can't put it any more plainly than
that. With the following information, you'll be training with
loads that are at least 15-25% higher than your body is used to
lifting. And that's good because the higher the load, the more
motor units you'll recruit. And the more motor units you
recruit, the bigger your muscles will grow.

Furthermore, everything's relative in life and training. So
if your maximum squat is 300 pounds, and if you safely expose your
muscles, tendons, and ligaments to 350 pounds, that original 300
pounds will begin to feel much, much lighter.

It's important to understand that full range of motion
movements are important, but whether you use partials or full
movements has nothing to do with motor unit recruitment. It's
easiest to think about motor unit recruitment in terms of force.
When you develop maximal force you can be sure you're
recruiting most of your available motor unit pool. After all, the
reason why you can develop high levels of force is because
you've tapped into many motor units.

The amount of force you can produce is dependant on three
variables:

1. The level of activation of each muscle fiber

Let's break those down:

1. The Level of Activation of Each Muscle Fiber

In order to produce maximal force we need to optimize as many of
those three variables as possible. (Remember, I'm talking
about force because it's positively correlated with motor unit
recruitment.)

The level of activation of each muscle fiber depends on the
motor neuron. The motor neuron and all of its associated muscle
fibers is known as a motor unit. The reason why muscle fibers
contract is because the motor neuron gives them an electrical
signal to do so.

Think back to your adolescence when your father would invariably
yell at you to put gas in the car. If he only yelled once, you
probably wouldn't do it. But if he yelled a hundred times,
you'd probably high-tail your ass to the nearest petroleum
station. The same is true when motor neurons "yell" at
muscle fibers: one signal doesn't cause much muscle
activation, but many signals will because each subsequent signal
summates. Think of summation as being akin to a snowball effect,
except the snowball in question is electrical.

How do you expose your muscle fibers to the largest level of
activation by the motor neuron? By attempting to move the load as
quickly as possible. Of course, heavy partials involve heavy loads
so it's not going to move fast. But the effort that comes from
your brain to lift the load quickly will fire up your motor neurons
as much as possible. So just attempt to lift each rep as fast as
possible and you'll be golden.

I don't like to speak much in terms of a muscle
fiber's velocity because the research really isn't
relevant to the real world. You see, the typical force/velocity
relationship demonstrates that active force diminishes with an
increase in velocity. But the research in question was performed on
isolated muscles without a fully functioning nervous system intact.

Furthermore, during natural movements both the length and
velocity of muscle fibers constantly change. Pair that with a
nervous system that's constantly adjusting its neural input to
the muscles. And pair that with biomechanical changes in joint
position, lever arms, etc. and you've got a big clusterfuck of
complex interactions that can't be explained by a simple,
isolated muscle fiber. Got that?

Now we're on to the good stuff, and back to partial
movements. One of the primary reasons why partials are so damn
effective is that they allow for advantageous joint positions.
These joint positions are advantageous because they allow the
muscles to position themselves so that a maximal number of cross
bridges can overlap.

To establish my point, try this little experiment. Make a fist
with your right hand as tight as possible with your wrist joint in
an unflexed position (your knuckles are directly in line with your
forearm). Have someone try to uncurl your flexed fingers from this
position.

Make a mental note of how difficult it is to uncurl your
fingers. Now, do the same test with your wrist joint fully
flexed (make the same tight fist but maximally flex your hand
toward your biceps). Have your friend uncurl your fingers from a
fully flexed position.

As you now know, your ability to keep your fingers from being
uncurled with your wrist flexed toward your biceps proved to be
very difficult. The reason is because you interdigitated the cross
bridges in your forearm muscles to the point where fewer cross
bridges form. The fewer the cross bridges that form, the less force
you can produce.

With partials we're going to take advantage of your
strongest joint and muscle fiber positions. In essence, you'll
be working in your naturally strongest range of motion. The reason
why a person's maximum bench press is only 300 pounds is
because that's the largest load he can lift through his weakest portion of the movement.

If this same 300 pound presser is told that he only needs to
lower the barbell halfway to his chest, bam, he can press
350 pounds. By training with a significantly larger load for one
month, his training load will jump substantially when he returns to
full range of motion bench pressing.

In addition to heavier loads and greater motor unit recruitment,
there are indeed other advantages to training with partials. Here
are my four top reasons to use partials every three to four
months:

1) They help you break through a strength plateau when
you're starting to get stagnant with a
movement.

2) They allow you to recruit the highest threshold motor units
– the muscle fibers and nerves designed to handle the
heaviest possible workloads.

3) They get your body accustomed to the shock of handling
weights that are heavier than you could lift through a full range
of motion.

4) They can relieve the joint stress that occurs with continuous
full range-of-motion movements.

Before I unveil the Powerful Partials Program it's
important that I iterate the importance of full range of motion
movements. I'm not saying you should stop training with a full
range of motion. That would be a bad idea.

Full range of motion movements should comprise the vast majority
of your training cycles. One of the reasons is because your
mobility will remain high when you force your muscles to work
through full ranges of motion.

Plus, you don't want to neglect any portion of a movement
for more than three to four weeks, regardless if it's your
weakest range of motion or not. After all, you must focus on your
weaknesses too! And that's why this program also incorporates
full range of motion movements along with mandatory stretching
exercises.

Second, you'll soon notice that the set/rep volume of each
movement is lower than I typically recommend. The reason is simple:
you'll be using much heavier loads than you're used to so
we must control fatigue by decreasing the volume.

Third, you'll probably have to experiment a little with the
loading. The idea is to use loads that are at least 15% higher than
you've been using. If you can use more, do it. But take it
easy the first week because these workouts can be demanding. Also,
the recommended loads are based on your full range of motion (ROM).
So if you see 100% of 1RM, that means 100% of your typical full ROM
performed as a partial.

Finally, since you'll be using such large loads it's
important to properly warm-up. I want you to perform 2-3 sets of
3-4 reps with 80-85% of your training load, whenever you feel
it's necessary. Be sure to warm-up with the partial ROM, not
the full ROM.

Now, let's get to the program!

Description: From a standing position, drop down until your knee
joint is flexed ~120 degrees.

Description: From a full hang position, pull up until your
elbows are flexed 90 degrees.

Description: Use a 45 degree incline and curl up until your
elbows are flexed 90 degrees.

Description: From the top position, lower yourself 6-8 inches.

Note: Hold each of the following stretches for 30s for two
sets.

High Intensity Interval Training (HIIT) – Perform 12
minutes of running sprints outside or on a treadmill. Walk for 50s,
sprint for 10s. Continue for 12 minutes.

Note: Don't rest between arms, start with your weakest side
first.

A2 Dumbbell side lunges

Note: Alternate legs with each rep for a total of 18
reps.

A3 Incline dumbbell side raise

Note: Don't let your arms drop all the way down; keep
tension on your upper back.

A4 Single leg back extension

Note: Don't rest between legs; start with your weakest side
first.

Note: Keep your torso as vertical as possible. Your back knee
should touch the floor.

Note: Use lifting straps, if needed.

Description: Rest your left knee and left hand on a flat bench.
Perform a dumbbell row with your right arm, pulling the dumbbell
until your arm is flexed ~110 degrees.

Note: Hold each of the following stretches for 30s for two
sets.

HIIT Bike Sprints – Cycle at a slow pace for 50s, then
turn up the resistance and sprint for 10s. Continue for 12 minutes.

DAYS 2 and 6 – Add one minute to the HIIT
sprints.

So that's partial training, Waterbury style. The Powerful
Partials Program will give you the best of all worlds. You'll
drastically improve your maximal strength, thus setting you up for
big muscle gains. But you won't lose any mobility since
you'll also be doing full range of motion movements, along
with stretching drills. 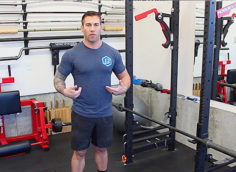 Pausing for 2 seconds during certain exercises can lead to big improvements in strength and performance. Here’s why, and how to do it.
Powerlifting & Strength, Training
Christian Thibaudeau September 22