Do Harm and Win

A fighter, no matter what his style, needs power. Quite simply, it allows him to do harm and win.

Power is a result of genetics and hard work. Genetics is a factor that can't be controlled. Some people are just born with a much higher potential for power.

Luckily, hard work can create power. But before we even start, we need to differentiate between two power-related factors: strength and speed.

Strength can be compared to an engine's mass. Let's take a Ferrari F50 and a monster truck as examples. The monster truck weighs around 10,000 pounds whereas the Ferrari only registers about 2700 pounds on the scale.

The monster truck is definitely "stronger" than the Ferrari.

Their speed, of course, is how fast they can go. At its top speed, the monster truck hits about 96 miles per hour while the Ferrari pushes up to 200 miles per hour.

The Ferrari's speed is of course a lot higher than the truck's. But power is strength X speed.

If the Ferrari slams into you at 200 mph it'll cause a lot more damage than the monster truck hitting you at 90 mph, though both would be unpleasant. The Ferrari is a lot more powerful than the truck.

As a fighter, you want to be more like the Ferrari.

From a fighter's viewpoint, developing strength isn't easy, since focusing too much on strength will undermine speed.

On the other hand, a fighter who neglects strength development is putting himself at risk for injuries. Finding the right balance is key.

A fighter can be very fast without being powerful. A thousand harmless punches are easily offset by one or two very hard ones.

Paying too much attention to speed development will inevitably cause a decrease in strength, so it's crucial to find a middle ground. Still, there are several important aspects of speed to consider:

Herein lies the secret for anyone lacking in innate skills to surpass his opponent. By working in particular on reaction (with a visual or a sound signal) and uncertainty exercises, it'll help to develop the weapons necessary to whip your opponent.

To get ready for a fight, you'll of course need to develop speed and strength, which, as stated, equates to power. And there are a number of ways of to develop power.

Let's consider training a fighter that's two months away from competition. We'll break up his training into two cycles:

This will last 3 to 4 weeks and be comprised of a 5/3/1 training cycle, assistance movements, and speed exercises.

This will last 2 weeks and focus specifically on power.

Here's how that breaks down.

Jim Wendler's 5/3/1 method is regarded as one of the simplest and most efficient ways to build strength.

Wendler's program is based on a 3-week cycle with an added recovery week. The program focuses on percentages of 1RMs rather than asking you to max out, thus making it a safer program that's less exhausting for the nervous system.

At its base are 4 main power movements. For our purposes, we'll work the military press, the incline dumbbell press, the front squat, and the deadlift.

Just like almost every type of strength program, 5/3/1 bases itself on a 1RM (one repetition maximum), but you don't actually use the 1RM. Instead, you use 90% of your 1RM.

Let's say your 1RM for the squat is 300 pounds. Ninety percent of that is 270 pounds, so that's the number you'd base your calculations on.

This chart will tell you everything you need to know:

Note: The "+" means you need to do, at the minimum, this number of reps, and more if you're able to.

After the successful completion of each 3-week cycle, you increase the resistance:

But first, as mentioned, you need to determine your 1RM for each movement. I'll use myself as an example:

So on the incline dumbbell press, the chart says I should be doing this during the first week,

The next week I'd do:

On the third week I'd do:

It's simple and the gains in strength come steadily, week after week.

Once you understand the 5/3/1 workout, here's how to incorporate it in a preparatory speed/strength training program.

Note: It's possible to combine both sessions 1 and 2 below (front squat and military press) and session 3 and 4 (deadlift and incline dumbbell press), which would allow you to change from 4 weekly sessions to 2, therefore leaving more time to train specifically for fighting.

During a fight, the average time spent on actual attacks is 3 to 7 seconds, but repeatedly and at a fast rhythm.

Think of doing intervals on a punching bag, sprinting, or doing kettlebell swings. All these exercises should be done in "sprints" in the neighborhood of 3 to 7 seconds long in order to get as close as possible to a real in-fight situation.

One month before the fight, the fighter should switch to an all-power cycle lasting 2 weeks. As it was for speed and strength, many strategies can be employed for power development.

This method consists of doing strength movements in an 80% 1RM range, followed by a bodyweight movement, and then specific techniques in speed.

For the upper body, this could mean 5 military presses (80% RM), then 5 fast-paced push-ups, followed by a sequence of punches on a heavy bag for 10 seconds. Three to 5 sets with a 2-minute break between each are typical.

This method consists of using weight-training movements in a stop and go manner that are close to fighting movements: 2-3 seconds of recovery between the negative and positive phases.

If choosing this method, the fighter shouldn't use weights that are too heavy. For example, do 5 incline dumbbell presses at 65% of 1RM in a stop and go manner with 2-minute breaks (dumbbells resting on the chest during the 2-3 second pause), followed by 2 minutes of shadow boxing.

This method prescribes weightlifting movements such as the snatch (best for wrestlers, judokas, and freefighters) or the power clean and power jerk (best for boxers and stand-up fighters) to increase power.

Never attempt maximum weights, though, since it's both dangerous and pretty much useless to a fighter. Likewise, working until failure could cause issues for the nervous system just as you're getting close to the fight.

Example: Five sets of power cleans and push presses at 70% RM with 2 minutes of shadow boxing between each set.

Two weeks before the match, stop any muscle building work. Your diet at this point is usually pretty restrictive, so continuation of any heavy muscle work could slow down weight loss or worse, cause injuries.

Only the speed exercises can still be of use. At this time of preparation, the focus will be on specific work (mitts, heavy bag, shadow boxing), on technical-tactical strategy, and on recovering (massages).

Use this style of bar when internal shoulder rotation is a limiting factor and regular benching is painful.
Bench Press, Exercise Coaching, Shoulders, Tips
Eirik Sandvik May 16 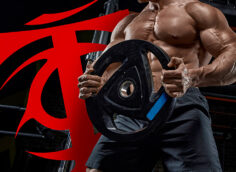 Still struggling to grow? It doesn't have to be that way. Make sure you're not leaving out any of these muscle-building exercises!
Bodybuilding, Exercise Coaching
Eric Bach February 7