When Should You Train To Failure?

The good news: Taking a set to absolute failure creates a greater training stimulus than not doing so.

The bad news: It also creates a disproportionate amount of fatigue, which can negatively affect the rest of a workout or your other workouts that week.

This means that most sets should be taken to about 2-3 reps away from absolute technical failure. This way you still get most of the training stimulus but at a much lower cost in terms of fatigue.

Note: I used the term "technical failure" to stress that sets should never be taken past the point of form breakdown. Every single rep should always look exactly the same, aside from speed.

Failure: The Right Time and Place

There is definitely a time and place to take your sets to failure. They include:

Always remember that lifting weights has benefits, but it also has costs, particularly in the form of fatigue. Remember that training is a process, not a one-time event. Every time you do a set, it pays to consider how it will affect the work that will follow.

Q & A with one of the world's premier strength coaches.
Bodybuilding, Powerlifting & Strength, Question of Strength, Training
Charles Poliquin November 20 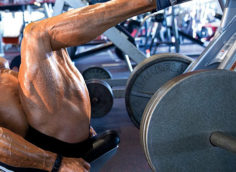