The leg exercises you're doing have a glaring hole. Yes, the squats, lunges, and especially the leg extension are leaving out one very visible muscle, the rectus femoris (RF).

The RF is the big muscle that can be seen in the middle of the quads. Unlike the rest of the quads which only have one function – extending the knees – the RF has two more responsibilities: hip flexion (anytime the hips move the upper and lower body closer together) and anterior pelvic tilt (when the top of the pelvis tilts forward).

The fact that the RF has two extra tasks to perform means it has to be trained differently than the rest of the quads. To properly train the rectus femoris, your best option is the standing leg extension.

The RF is a fast twitch powerhouse, meaning that it expends energy relatively quickly. Keep the amount of reps between 4-8 and the amount of sets per week between 3-6.

Why does having two extra functions mean the RF has to be trained differently?

There's a concept called Length-Tension Relationship. Muscles that pull on two joints are called "bi-articulate." Because they attach to multiple joints, bi-articulate muscles have multiple jobs, but they aren't very good at multitasking.

Remember that the rectus femoris is responsible for hip flexion and knee extension. Most leg exercises involve hip flexion, including squats and lunges. If your hips are already flexed, then the RF can't properly do its job of extending your knees.

At least with squats and lunges, your hips extend as you lift the weight. Because the hips are in a fixed flexed position, the seated leg extension is worse than the squat and lunges for the RF. The natural solution is to do a leg extension while your hips are already extended, or while you're standing straight up.

What about the sissy squat? Isn't that technically a standing leg extension?

The range of motion for the sissy squat is a bit longer if you touch your hamstrings to your calves. But the sissy squat is also much harder on the knees due to the forward tracking of the knee and the heels rising off the ground, which is necessary if you do a full sissy squat.

Bench pressing with Crazy Bells feels like having a wild animal tugging on the bar as you move it.
Bench Press, Kettlebell Training, Training
Craig Weller November 20

The road to a massive body that sports its own zip code begins with simply getting stronger. Here's a minimalist approach to getting maximal results.
Bodybuilding, Powerlifting & Strength, Training
Tony Gentilcore April 24

Maybe you're not injured and you don't plan on being injured. (Ha!) Regardless, this article contains secrets to the weightlifting universe that will help you understand how the body works and, as they say, knowledge is power.
Training
Eric Cressey May 15 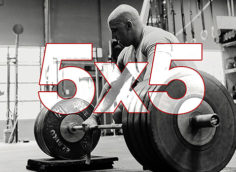 The 5x5 system has been around forever for a reason: it works. But it has its shortcoming. Let's make it even better.
Training
Christian Thibaudeau February 21