When people used to ask me to explain the difference between a squat and a deadlift, I'd always give a simple, straightforward answer: In the deadlift, the weight is in your hands.

To me, that was the easiest way to distinguish between squats and deadlifts. With squats, the bar is on the shoulders, either front or back; in the deadlift you have the weight in your hands.

So with that definition in mind, this is a deadlift:

And this is a squat:

Funny, they look an awful lot alike, don't they?

I can hear the arguments brewing already. "In the first video she bends forward slightly at the hips." So we're splitting hairs then? Bottom line, the movements are very similar. So, if my definition is correct and a deadlift is defined by a weight in the hands, what is this?

Is that a suitcase one-leg deadlift?

Readers will say, "Of course not, that's a rear-foot elevated split squat," or if you like silly names, a "Bulgarian lunge." But isn't the weight in the hands? True, but the argument will be that it's still a squat because the torso is more erect.

Now things start to get complicated. In a goblet squat, the weight is in your hands but above the waist. It's a squat.

In the kettlebell sumo deadlift shown earlier, the weight is in the hands but you can clearly make the pattern into a knee dominant one. So is it really a squat?

Does it depend on how you do it? If you use a squat pattern with a trap bar deadlift, does it become a trap bar squat?

Here's a new one: Perhaps it's a deadlift if you pick the weight up from the ground and then lower it back to the ground?

That might've been my new definition, until I read Dan John and Pavel Tsatsouline's Easy Strength. Pavel and Dan make the distinction of a deadlift having "deep hip movement with minimal knee bend," and squats having "deep movement of the knees and hips."

Another would be the inappropriately named still-leg deadlift (shown below). I prefer the term 'modified straight-leg deadlift' – and don't call it Romanian; we did these long before the Eastern European guys renamed it.

With the popularity of swings and the emergence of the trap bar, the landscape has changed. In fact, this year I'm strongly considering changing the name of our 'trap bar deadlift' to 'trap bar squat.' Truth is, the way we teach the lift is more like a squat than a deadlift.

On the other hand, our one-leg straight leg deadlift is definitely a deadlift (see the video below). Lots of hip flexion with minimal knee flexion.

Let's look at some other lifts and see how they stack up against Dan and Pavel's definition.

But is this a deadlift? When I was a powerlifter this was the deadlift – for squatters. I was a sumo style deadlifter because my legs were much stronger than my back. If you're a wide-stance squatter and more anterior chain dominant, you'll probably pull more in the sumo deadlift than the conventional deadlift.

Basically, you squatted your deadlift while holding the bar in your hands. If we think 'knee dominant' or 'hip dominant,' we have to vote for knee.

In Functional Training for Sports I called these hybrids – exercises that didn't fit simply into knee or hip dominant categories.

The unloaded version of this would be a sumo squat. Add a kettlebell and you have a sumo deadlift. Move the load up to goblet position and we have a goblet squat. Confused? I hope so. The point is that things are never as clear as we think.

2. Trap Bar. It looks like a squat, except the weight is in your hands. Some might say this is clearly a deadlift as the weight is in the hands at waist level, but look at the pattern. It's much more squat than deadlift , at least the way most people do it.

3. Suitcase Style Rear Foot Elevated Split Squat. Is this a deadlift? I don't think so, but when I look at my old rules, it certainly seems like one.

Enough with the Categories!

Really, who cares? It's all just semantics. If we're in a powerlifting meet, the deadlift will always be the lift where you pick the weight up off the floor.

However, in gyms and sports performance programs the menu has changed. If it's 'hip hinge with minimal knee movement,' then call it a deadlift. If it's 'shared knee and hip movement,' mark it a squat.

It's funny how much we learn after we know it all. 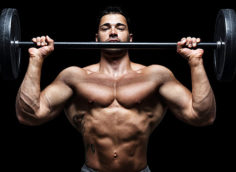