The vertical jump is often seen as the holy grail of athletic performance. The NFL Combine tests it as a measure of explosive strength, and many athletes use it as a proxy for lower body power.

Most methods to improve it revolve around heavy strength training and variations of jumps and plyometrics to enhance muscle activation. But what if there was a way to instantly increase it? Well, there is.

Vertical jump performance is influenced by takeoff velocity – the ability to produce high levels of force during the concentric phase. Hence the prescription of heavy squats along with loaded and unloaded jumps. These exercises are able to increase motor unit recruitment and target fast twitch muscle fibers.

One way to improve jump height instantly is through increasing impulse (calculated as force x time). The deeper you dip during the eccentric phase, the more time you'll have to produce force during the concentric phase, potentially increasing takeoff velocity.

But during sports, time is limited, so changing your jump strategy dramatically may not be optimal. And a deeper eccentric phase doesn't allow the same stiffness as a shorter dip, so elastic energy that can be used by the stretch-shortening cycle may be reduced.

While improving muscle activation through training is important, muscle relaxation has been associated with elite athletic performance. Further, we know that elite athletes are able to relax their muscles at a much faster rate than novice athletes.

Sadly, muscle relaxation doesn't improve through the same mechanisms as muscle activation (e.g. strength training). So what can we do?

A recent study took eleven healthy men and randomly assigned them to a leg shaking group or a no leg shaking group. As it was a crossover design, all subjects took part in both conditions but on separate days. Each group performed 10 vertical jumps with 30 seconds rest between each jump on a force plate.

The leg shaking group spent their rest period shaking their legs with a bent knee and a raised heel so their thigh muscles could oscillate freely. Like this:

The no leg shaking group just rested for 30 seconds.

What The Study Found

The leg shakers had higher jump heights and concentric phase impulse compared to the no shaking group. However, this was only found in seven of the eleven subjects labeled as responders.

By shaking the legs between jumps, you may mitigate fatigue and enhance muscle relaxation as shown through improved eccentric impulse.

If you don't have access to fancy vertical jump testing device, you can use the "My Jump 2" app which can calculate jump height through your phone.

Now pick the same day over two weeks and do your jumps under the same conditions on both days. On one day, perform the leg shaking between your 10 jumps. On the other, just rest between jumps.

Record your jump heights and see if you're a responder or non-responder. It's important to note that your jump performance using this protocol can potentially be influenced by what kind of cardiovascular shape you're in. Two subjects in this study actually decreased their jump heights while using the leg shaking technique, which could be due to cardiovascular fitness.

It could also come down to some athletes needing the feeling of staying "charged" between attempts rather than decreasing neural activity or excitement, which has been suggested as a mechanism of leg shaking.

Add It To Your Training

Add leg shaking into your rest periods. Here's an example of how you can use it within your power training:

It used to be the rule for building big quads, but today most people haven't heard of it. Let's change that.
Tips, Training
Chris Shugart January 6 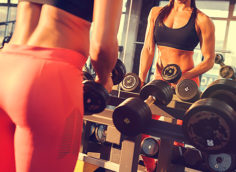 Compression wrapping is an inexpensive way to treat those troublesome knees, wrists, and elbows. Here's how to do it.
It Hurts Fix It, Mobility, Soft-Tissue Techniques, Training
Brad Kaczmarski August 27