Some people don't train their calves because they think their other leg work is sufficient. But that doesn't really work well for calf growth, unless you're a genetic freak. You need to hit them directly... and hard. Here are three things you can do to force them to grow:

1 – Use momentum in standing calf raises.

You need to train your calves heavy, and a little momentum is going to help you maximize the load. Many people get the heavy part right, but where they go wrong is with their quarter-rep bouncing.

So don't go overboard with momentum. I'm not talking about loading up a ridiculous amount of weight on the seated calf raise and using your Achilles tendons like springs. I'm talking about the standing calf raise in particular, using a jumping-type motion to begin the movement, and finishing it with a full, peak contraction.

This "jumping calf raise" is something I was first introduced to by Menno Henselmans, and it's a fantastic way to help force your calves to move more weight while still achieving full range of motion and contraction, all with little risk of injury. This works with a barbell or a standing calf raise machine. 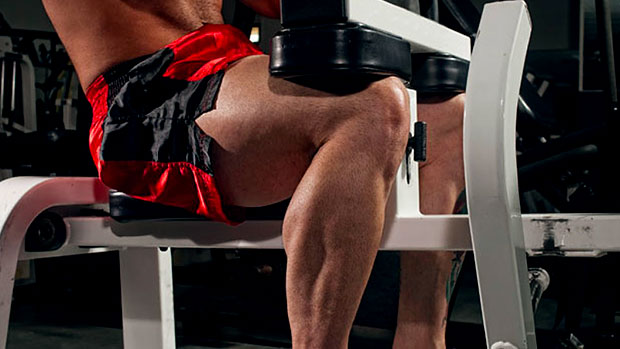 2 – Take a 3 second pause on the seated calf raise.

3 – Up the volume and frequency.

Training heavy is only part of the puzzle. By using momentum, you're going to be able to train them heavily with high volume, which is crucial. And I'm not talking like 3 sets of 10. I'm talking like 4-5 sets of 20 or more reps. Train your calves at least twice per week for growth.

How much work do your calves do on a daily basis? They move your entire bodyweight thousands of times per day! So doing 3 sets of 10 isn't going to cut it. Just like other muscles, they don't just benefit from volume, but from training frequency as well.

A simple way to program this into your workouts is to finish your session with:

Do each for 4 sets of 20 reps, twice per week, at the end of any of your workouts. Work on increasing your volume each session and watch them grow.

Yeah, burpees don't suck enough, let's make them tougher! Seriously, this will get you in fighting shape fast.
Exercise Coaching, Legs, Metabolic Conditioning, Tips
Eirik Sandvik April 14
A competitive powerlifter recently contacted me to correct his woefully pathetic bench press. After a few tests and some obvious visual clues, I realized that his triceps were holding him back from pressing up big numbers.
Training
Chad Waterbury February 21

In this exclusive excerpt from his new book, Nate Green looks at the beliefs and behaviors that keep skinny guys skinny and fat guys fat.
Bodybuilding, Training
Nate Green November 19