Every once in a while, you're reminded (or at least I am) of a
technique that no one seems to use, despite the fact that it works
better than any of the alternatives.

Rest-pausing is one such technique.

But first, a question: Why would you perform a set of
repetitions continuously, when in most cases, you have the option
to pause between reps?

OK, here's the answer: because it hurts more.

Really. Most of us base our training decisions on whether or not
the decision in question has the potential to cause more pain. If
it does, we'll usually take that option.

Which is pretty dumb. Because the training effect is a direct
result of the training you do, not how much pain that
training causes.

Rest-pausing, on the other hand, is a perfect example of a smarttraining strategy: it doesn't hurt as much, but it
permits higher force expression, which in turn recruits more muscle
fibers — particularly the fast ones that grow like
weeds.

I'd go so far as to say that you should use the rest-pause
approach whenever and wherever possible — it's that good.
After all, if briefly pausing after a rep allows you to contract
with more force on the next rep, what's the downside?

You can use this technique with most of the exercises you
currently use: Squats, deadlifts, Olympic lifts, chins, curls, the
list is almost endless. I'm not big on machines, but one
upside of almost all of them is they allow you to
rest-pause.

Some exercises don't work quite as well, but usually they
can be modified. For example, bench presses. Typically, you can
"rest" during the lockout, but depending on your limb
length and triceps strength, it may or may not be a viable option.
However, if you set yourself up in a cage with safety rails at
slightly above chest level, you'll be able to pause between
reps in the bottom position.

Okay, this is a little more rest than Charles was talking about,
but you get the idea.

Another example is the lying triceps extension. On this drill,
you won't get much rest at the lockout position, but you can
simply lower them briefly to your chest, then press them to arms
length to resume the set.

Honestly, I'm hard-pressed to come up with additional
examples of exercises that don't permit the rest-pause
technique. Which begs the question: "Why aren't you using
it?"

Smart trainees focus on performance, not pain. Don't select
exercises or techniques based on how much they hurt! While
it's true that effective training techniques often hurt,
sometimes they don't, as this example points out. Whenever a
technique potentiates performance, it also maximizes the gain
you'll experience from that performance.

Being stronger in the basic barbell lifts makes everything else you do in the gym easier. Here’s how to do it.
Powerlifting & Strength, Training
Tim Henriques March 15 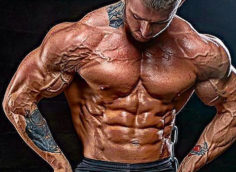