Most at-home workouts kinda suck. How do we know this? Because success leaves clues, but so does stupidity. You'll know an at-home workout falls short on the training spectrum when:

Gym or no gym, equipment or no equipment, the underlying principles of building muscle still apply to your body. When constructing at-home workouts, apply these principles to create an effective routine.

1 Your muscles respond to force.

Your muscles don't speak Spanish. They don't even speak English. The language they speak and respond to is force. Tools you can apply to your workouts to create force and tension include:

If you want to build (or keep) muscle, you're going to have to make your body work harder than it has in the past to create an adaptive response.

You've heard the definition of insanity: doing the same thing repeatedly and expecting a different result. Why would building muscle be any different?

4 Your muscles need consistency to grow.

While you need a healthy dose of variety and intensity, none of this will work unless you put in the work consistently.

Here's what to add to your training that'll help you check all the boxes above and build muscle even when you can't be at the gym.

You'll need one resistance band and some floor space. That's it.

Bands can place constant tension on the muscle throughout the entire range of motion of an exercise, and the tension will increase as you reach the final portion of the movement. This makes the effect on your muscles greater than standard cable systems since they're forced to work harder as they reach the finish line.

Recommendation: Watch the videos, practice each exercise, and then do them back-to-back in circuit style for a few rounds.

Do 15 reps and immediately move on to the next exercise.

Do 10-15 reps and immediately move on to the next exercise.

Do 10 reps and move on to the next exercise.

Do 10-15 reps and immediately move to the next exercise.

After the hold, rest for a minute before starting all over again with the first exercise.

This is just a suggestion. You can use these exercises in any order or set/rep scheme you like.

Do each exercise back to back:

Rest for 60 seconds after all have been completed. Repeat for a total of three rounds.

And now on to the lower body.

You can challenge your lower body with a band, just like what we talked about for the upper body.

Recommendation: For this workout, superset the exercises except the split lunge, where you'll be alternating between legs.

Do 8 reps, then immediately move on to B2.

Like the upper body workout, this is just a suggestion.

It happens every time I write an article or give a workshop. Someone asks me, "So, uh, Dan, do you think I should do it five times a week or should I do it twice a day?" It doesn't matter what "it" is – one arm lifts, Tabata front squats, Olympic lifts–I always get the same perplexing response.
Training
Dan John March 1 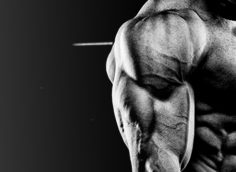 Feel the triceps doing the work and you'll actually be able to build them. This move will get you there.
Arms, Bodybuilding, Tips, Training
Tom MacCormick September 1