The Sketchy History of Isometrics

In the 1960’s, weightlifters at York Barbell started experimenting with steroids. They gained significant strength and muscle in a short amount of time. Their Olympic lifts also went up quickly.

Founder Bob Hoffman had to have a story to explain the dramatic changes. He couldn’t tell the public that the increases in size and strength were from drugs. He “blamed” it on isometrics. 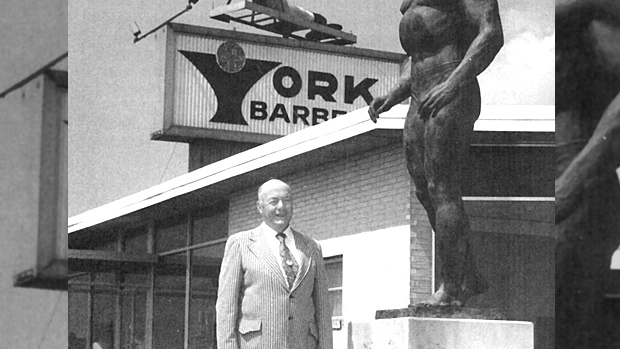 “Isometric” means exerting muscle strength and tension without producing an actual movement or a change in muscle length. In other words, holding a weight still at certain joint angles.

That helped Hoffman because it allowed York Barbell to sell a ton of power racks. Power racks were needed to do most of the useful isometric training that lifters were doing at that time.

At some point, the genie was out of the bottle and many people found out the real story. When the average person found out that the new power rack he just paid good money for wasn’t the only reason York lifters had made so much progress, he was understandably upset. After all, no one likes to be lied to.

So, isometrics made a dramatic entry into the strength training world and just as dramatic an exit. The rack has stuck around, but in a version that would be almost unrecognizable to those who bought the original racks from York.

Isometrics fell completely out of favor. Now many lifters have never even heard of isometrics let alone used them or ever encountered the type of power rack that was built to better take advantage of this training style. Isometrics and equipment built to do them are a forgotten relic in the strength training world, particularly among Olympic weightlifters.

This is unfortunate, because isometrics are an extremely effective tool (even without steroids) to amplify progress. If used correctly, isometrics are actually one of the most effective strength training tools in existence.

I’ve used isometrics for years because they remain the fastest way to build strength as shown by university studies. They do have disadvantages, but that one advantage trumps everything else. The biggest disadvantage is that the strength gained is only applicable at – or very near – the joint angles where the isometric training was done.

The research has indicated that strength is gained starting at a joint angle of about 15 degrees less than the one trained, and ending at about 15 degrees over the angle where the training occurs.

As lifters, we of course know exactly where each lift is the most difficult. On a lift like the snatch, moving the bar off the floor is often one of the hardest parts of the lift for inexperienced lifters. Quite often the back bends immediately as the beginner tries to get the bar moving.

Lifting the bar just one inch off the floor and doing an isometric hold is a very fast way of both teaching yourself how to properly fire the spinal erectors to hold the back tight, and building enough strength in the erectors to allow you to hold the back straight no matter how much weight is on the bar. 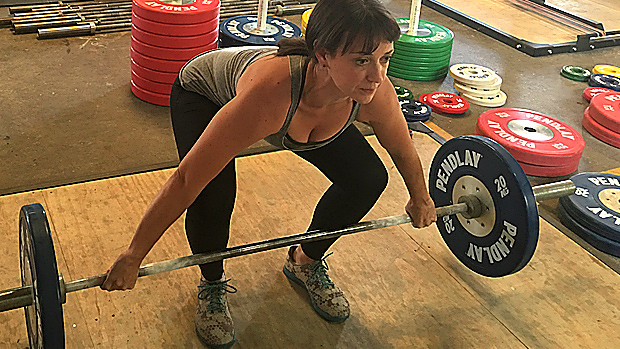 Isometric Hold Off the Floor

A second place where isometrics can be helpful on the snatch pull is at the knee or right below the knee. 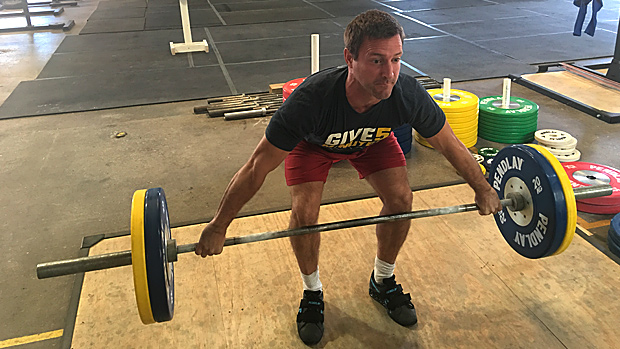 Isometric Hold Right Below the Knee

For most lifters, this is the point where the hamstrings are under the most tension, and without enough strength in this position the bar can lose acceleration or even lose speed.

Because of this, it’s also my favorite place to do an isometric hold. When done properly, isometrics can increase strength in this position so quickly that you can seemingly feel the difference from one workout to the next.

A third place to use isometric holds in either the snatch pull or the clean pull is at the top of the pull right at or slightly below the hip. 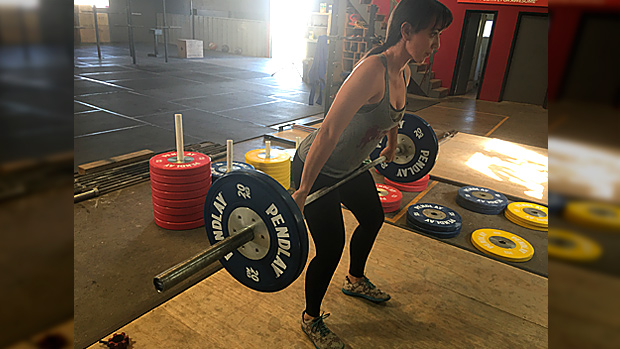 Isometric Hold At Top of Pull

This is where Donny Shankle really liked to do them. He would pull the bar to that position then lean out over the bar as far as he could while pushing backwards on the bar with the triceps and lats to keep it pressed firmly into his thigh.

He felt that this increased his ability to keep his shoulders over the bar late in the pull. With a best clean of over 220 kilos, who can argue with him?

Another movement that isometrics seem to be tailor-made for is the squat. My first introduction to the use of isometrics in the squat was from Jim Moser who was a great weightlifter in the 1980’s and actually one of the last lifters to train at York Barbell. I coached Jim’s son, James Moser for a few months and he was a sensational lifter in his own right, actually one of the most talented lifters I’ve ever worked with.

While James was living with me, Jim used to send him workouts. When he started lagging in the front squat, Jim asked us to include some isometric holds in his squat training. We had to drive to a gym downtown that had a power rack to do them, but we did holds at two different positions where his thighs were near parallel to the floor and did a couple of holds at each position. 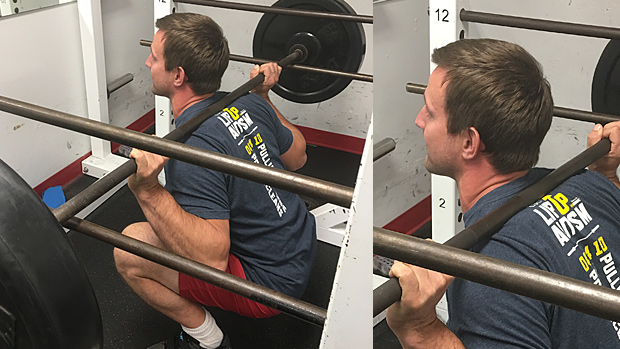 Lifting the Bar Off Bottom Pins 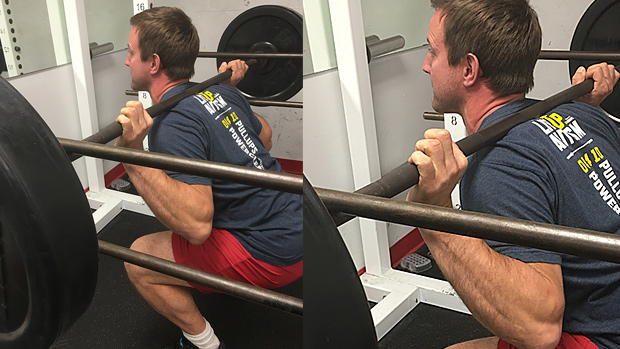 On both the front squat and the back squat, lifters usually have no problem rising the first 4 inches out of the hole if they take advantage of the bounce. But right after bouncing out of the bottom you can run into a problem.

So how exactly do you take advantage of this training method? One of the advantages of isometrics is that the training programs using this method are surprisingly brief.

James used 3 or 4 six-second holds in the squat rack. We set two pins in the rack, one under the bar to lift the bar off of, and one that defined where the hold would actually occur. He’d wedge himself under the bar to start, then lift it off the bottom pin and hold it against the top pin for the required six seconds before letting the bar fall back to the bottom pin.

With a max front squat of 375 pounds, James would use 225 pounds for his isometric front squat holds. That’s only 60% of his best front squat, but starting at the bottom and holding at the most difficult part of the lift for 6 seconds is incredibly hard even with 60%!

Donny lifted on a normal weightlifting platform and started in a normal snatch position. He lifted the bar loaded to about 60% of his best snatch-grip deadlift to a point where the plates were just barely off the floor. He then held the weight for 10 seconds, keeping the weight and his body motionless. He then repeated the 10-second hold with the bar lifted to two more positions: just below the knee and just below the hip. 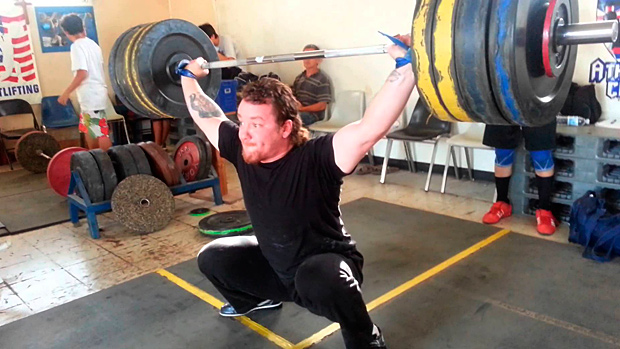 Jared Fleming recently used the same strategy to break the American record in the snatch with a 371kg lift. He also used 3 positions with a 10-second hold in each position. What’s interesting about Jared is that with no other training on the deadlift he was also able to increase his deadlift by about 50 pounds.

The holds done by Jared and Donny would’ve worked even better if they had access to a rack where they could lift off a bottom pin and hold the bar against a top pin. But their ability to use this method and gain from it even without the right kind of equipment just proved that it’s usable by anyone in almost any situation.

Donny did the isometrics after his normal snatch and clean training as did Jared. For James we added the isometric work in an evening workout several hours after he has done his normal training. Both methods worked.