Tight hips? Stretch them out! Shoulder pain? Stretch out those pecs. Bad ankle mobility? Give your calves a good stretch.

You've heard this advice before. You've been told by a personal trainer, physical therapist, or internet "expert" that stretching is the ultimate solution to all of your musculoskeletal woes. Over the years, static stretching has been dubbed somewhat of a panacea for a myriad of aches and pains.

While it can be beneficial in certain scenarios, there are also many instances in which it could actually be harmful – especially if you're stretching a muscle group into oblivion and getting no relief.

Whether it's a warm-up, a cooldown, or mobility work, some people look for ways to throw stretches into every workout. Many will even use assistance: bands, weights, partners, you name it, anything to get a deeper stretch. Sure, they may feel relaxed in that position, but it may not be eliciting the effects they actually need.

This is why a lot of lifters stretch. If you want to get a better squat, or move like a gymnast, surely you need to stretch, right? The short answer is yes, it helps, but only if you do it consistently.

Static stretching is really effective at improving range of motion (ROM) acutely. If you stretch your hamstrings for 30-plus seconds, you'll stimulate the central nervous system, which will allow you to ultimately achieve a greater range of motion. Doing this consistently will help your body feel safer in an end range, allowing the muscles to extend a little bit more.

The downside? If you aren't stretching regularly, those effects will be limited. And to expect someone to stretch 3-5 times per week in perpetuity seems unreasonable. So yes, stretching CAN help improve your ROM in the short term, but studies show it doesn't last.

Researchers tested a 6-week stretching protocol to see if it would create lasting adaptations in ROM after a 4-week cessation. In the first 6-weeks during the stretching protocol, the mean knee ROM increased by an average of about 10 degrees. Unfortunately, as soon as the participants stopped stretching, their ROM returned to their baseline scores (Willy et. al. 2001).

As such, stretching is only effective insofar as someone does it all of the time. It's effective for creating temporary changes in the central nervous system to yield greater muscle extensibility, but it isn't the way to go if you're looking for a more sustainable improvement.

Slow eccentrics (negatives) are preferable to develop long-term changes in range of motion. Interestingly, a study showed that eccentric training of the hamstrings actually increased the fascicle length of the biceps femoris (Potier et. al. 2009)! Effectively, eccentric exercise altered the architecture of the muscle.

This would likely create a longer-lasting change than simply stimulating the nervous system, which is what we see with static stretching. Controlled eccentric exercises done once or twice per week can yield some pretty incredible changes in the end range.

Eccentrics also give the added benefit of building strength in a movement, which makes it preferable to static stretching. For example, I might have someone with tight hamstrings do tempo Romanian deadlifts with a pause. Take a look:

This will create a tremendous stretch in the hamstrings under load. Simply control a movement on the eccentric or lowering phase for 3-6 seconds with a 1-3 second pause in the bottom. A few sets of this is enough to leave you sore for days. Additionally, you'll find that they're stronger at end range.

It seems logical to stretch an area that feels tight. Stretching the muscle will help it relax, right? Well, not necessarily.

Tight muscles can occur in two different scenarios: a muscle can be tight and weak or tight and strong. While these instances seem to contradict one another, I'll explain how that happens.

Our bodies have many different strategies of compensation. In the first case, for example, you might feel tension in your hamstrings because you actually have extremely weak hamstrings (and typically a weak core as well). The hamstrings become tight as a means of protecting the hips.

In this case, eccentric training of the hamstrings is again the perfect remedy. Barbell good mornings would be a great option for building your hamstrings. By strengthening the muscle in question, you can effectively get the central nervous system to relax and feel safe enough to contract that muscle.

Static stretching would certainly not be beneficial in training a weak muscle. While it may provide acute relief, in a few hours the tension will likely return to its original state.

Conversely, a muscle that's tight and strong may be compensating for another weak area. Let's consider the latissimus dorsi. Men often have extremely tight lats. It can get so bad that they're unable to lift their arms all the way overhead without hyperextending their lower backs.

Many people would assume that stretching the pecs and lats is the best way to improve overhead range of motion, however, this doesn't exactly hold true. The lats and pecs tend to compensate for underactive lower and middle traps.

If you tell a man with strong lats to simply stretch them to oblivion, now you've weakened his only line of defense. The second he goes to move any kind of weight above his head, his body is going to be extremely unstable because he cannot properly sequence that movement pattern.

If that sounds like you, strengthen the middle and lower traps to allow the lats to relax a little bit. Having optimal mechanics and muscle function is just a matter of balance: if one muscle group is too strong, another muscle group will have to relax and stretch. Finding a better muscular balance from front-to-back, top-to-bottom, and left-to-right will keep your body feeling supple and healthy in the long term.

I like to refer to mobility and stability as a continuum:

The ideal situation is to be somewhere in the middle of the spectrum: enough mobility to perform all the necessary tasks in our daily lives with ease, but enough strength and stability to truly control those positions within our range of motion. If you fall too far towards one side of the spectrum, you'll increase your risk of injury.

Many of the hypermobile people I train fall victim to injuries related to overstretching or dislocating a joint: shoulder dislocations, ankle sprains, etc. Excessively tight lifters and athletes tend to experience injuries that demonstrate overuse of a muscle like hamstring pulls and bicep tears.

What does all of this have to do with stretching? If you're hypermobile (someone who already has a range of motion well-beyond what's necessary) and you continue to stretch, you're further lengthening the tendons that are already lax and continuing push yourself into potentially dangerous positions.

Let's consider a dancer for example. A hypermobile dancer doing an overhead press is likely to maintain a hyperextended lumbar spine at the top of the exercise. If a coach were to add shoulder mobility work or stretching into her program, her overhead stability is only going to get worse. In her case, stretching is going to further compromise the integrity of her overhead pressing pattern.

It's imperative that hypermobile individuals do not stretch, especially in positions where they are already very weak. For those people, stretching typically does far more harm than good.

I'm not a huge advocate of stretching because of the overemphasis it already receives. Of course, there is a time and place for it! But it's not the cure-all that a lot of other people seem to think it is. It can even be counterproductive to the adaptation you're trying to achieve.

If you've been implementing stretching into your routine and it's something you enjoy, you don't necessarily need to stop doing it, but it's important to consider why you're doing it, and how to prevent the potential negative side effects before you go yanking your limbs in different directions. 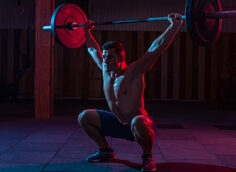 From walk-on to scholarship football player - a guide to achieving your dream, whatever it is.
Motivation, Training
Jim Wendler April 23