I've been out of school for a few years, but I still consider myself a researcher. I'm not talking about just reading research (which I also do), I'm talking about doing it.

My research takes place in one of the most sacred labs, the gym. I'm often my own guinea pig, and my workouts are a chance for me to test out different ideas that I either think up myself or get from other people. I'm always open to new ideas, provided they're safe and make sense.

That's why I was intrigued when I first saw Mike Boyle write about dropping back squats in favor of single-leg training.

I'll be honest – at first I didn't buy it. I loved squatting and couldn't see some "foo foo" single-leg exercises having nearly the same training effect.

Still, I was torn. On the one hand, Mike had some convincing points in favor of single-leg training, particularly concerning lower back safety. As someone with a history of serious low back issues, this was convincing. Plus, he was getting great results with his athletes, and at the end of the day, I hang my hat on results.

That being said, my athletic career is long gone, and I was skeptical how well his ideas would work for the average guy like me who just wants to get stronger and look better. The fact that it went against nearly everything I'd ever learned about leg training – not to mention everything I enjoyed doing in the gym – didn't help either.

In the end, I wound up doing what I always do when I'm unsure about something. I tried it.

This article is not saying unilateral training is any better or worse than bilateral training. I'll refrain from judgment as much as possible and just share my personal experiences, along with some reflections based off that.

The experimental procedure was simple. For about a year, I dropped all quad-dominant bilateral exercises from my program and replaced them with unilateral variations.

Initially it was a huge adjustment because until that point, my lower body training was comprised almost exclusively of bilateral work.

At first I struggled with the stability aspect of the single-leg exercises. I found it difficult to use much weight at all, and almost quit the experiment after the first two weeks because I figured it was a lost cause. But I stuck with it, and after an initial learning phase of about 3-4 weeks, my balance began to improve. And my numbers on the single-leg exercises started to skyrocket.

For example, in the first eight weeks, I went from using 40-pound dumbbells for Bulgarian split squats to using a 275-pound barbell. I also went from not being able to do one bodyweight single-leg squat to using over 100 pounds of external load for 6-8 reps.

Keep in mind that I went into the experiment having already built a solid foundation of strength on the bilateral lifts, so the initial surge in single-leg numbers was more adjusting to the exercises and tapping into the existing strength than it was actually getting stronger.

Once I got the hang of the single-leg exercises, it became more about simple progressive overload, just like I'd done previously with the bilateral lifts.

Programming–wise, I simply plugged the unilateral exercise in place of where I'd previously done a bilateral exercise – at the start of the workout. I kept the rest of my training program pretty much the same so that I could minimize other variables as much as possible.

Each session started with a unilateral quad dominant exercise done for 5-6 sets of 6-8 reps followed by a hamstring exercise, which was usually glute-ham raises. I also ended most of my lower body workouts with heavy sled drags.

For the first eight months, I trained lower body twice a week, but after a while I began to notice that I could train my legs more frequently when I was doing unilateral work, so I upped it to three times a week.

After a year or so of doing nothing but unilateral quad-dominant work, I added some light front squatting at the end of my workouts. I kept the rest of my workout the same and continued to do the bulk of my strength work through heavier unilateral training.

As much I resisted the idea of single-leg training at first, I started to enjoy it once I got better at it – so much so that my urge to squat started to dwindle. My back was feeling good and I felt like I was getting stronger.

Still, once a squat fiend, always a squat fiend, and finally after doing single-leg work for the better part of 15 months, seemingly out of nowhere I was overcome with an intense bout of squat fever.

It was a Wednesday, and despite having just done a hard leg workout the day before, I decided to give it a rip and see what I could muster.

Having not pushed my squats hard for so long, I really had no clue what to expect. Two hundred and twenty five pounds seemed like a good place to start, so I went with that. My previous best was 225 x21, so I was hoping to get somewhere around that.

It felt great to let loose, and I ended up far surpassing my expectations by getting 35 reps and blowing my previous best out of the water. Check out the video below.

I have no clue what my max squat is, and I have no intention of testing it anytime soon. One math-challenged guy on YouTube commented that 225 x35 calculates to a 4,106-pound 1RM, so I guess I'll take it. YouTube warriors are rarely wrong.

Kidding aside, a couple months after testing the high rep back squat, I decided to try out another lift I used to love – heavy barbell hack squats. I ended up getting 405 x5. My previous best two years prior was 385 x5, so I was pleasantly surprised to see improvement – especially since it'd been so long since I'd last done them – but it wasn't as pronounced as with the high rep squatting.

I should also mention that my vertical jump increased from 29.4 inches to 31.8 inches.

My thighs also got bigger in the process. I can't say how much bigger exactly because I didn't measure them, but I know they grew at least a little bit. Last month I busted out my old knee sleeves that I used to wear for squatting and they were so tight that I couldn't get them on and I had to order the next size up. 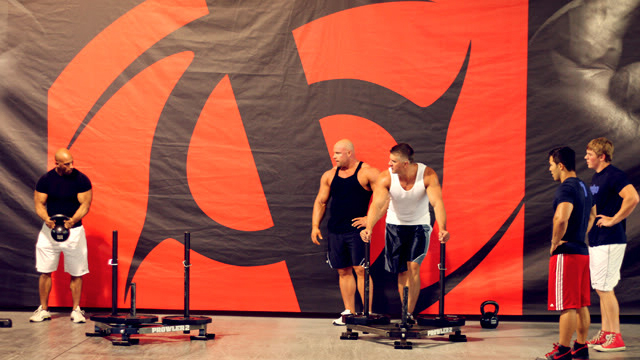 Here are the key points, based upon my experiences:

If you treat the single-leg work as an accessory movement and do it at the end of the workout and don't push the loading, then sure, it's not going to do much for strength – it becomes more about building stability and evening out imbalances between legs, which is fine. If you put it first in the workout and follow the principle of progressive overload, however, then it becomes a strength exercise.

That goes for any exercise though. If you blow through a few light sets of squats at the end of a leg workout, it's doubtful it will do much for building strength, either – but you'll be hard pressed to find anyone that will argue squats aren't a strength exercise.

A carryover effect exists from single-leg training to bilateral training. This was something I was unsure of going into my test, so I found it very interesting to see that my bilateral lifts actually increased after the substantial layoff.

That being said, the carryover is significantly bigger for higher rep work than for lower rep work. I suggest that the legs can be overloaded more with single-leg training than with bilateral squatting, but the overall load is significantly less. This makes it a great way to increase leg strength, but not as good for increasing total body strength and priming your nervous system to handle heavy loads.

Still, it should go without saying that if your goal is to increase your squat, then you should base your training around squatting and use the single-leg work as assistance.

Single-leg work lends itself best to moderate rep ranges (5-15). I'm uncomfortable doing under five reps, and after about 15 reps I start to get shaky, which I presume is the hip and knee stabilizers fatiguing. That's just me, though.

If your goal is to build maximal strength, use bilateral exercises when training in the 1-5 rep range.

The same thing goes for higher rep work. When packing on leg mass is the goal, doing a hard set of 20-40 squats to finish your leg workout (the type of set where you're seriously questioning your life half-way through) is tough to beat. You can't replicate that type of effort on one leg because balance tends to become a limiting factor.

That's a gut feeling I have based on years of grinding out high rep squats, but it's supported by my numbers. I squatted 225 x35, but my best Bulgarian split squat isn't even half that, and that's not even taking into account the role of the back leg.

However, in moderate rep ranges, I'm able to load my legs more unilaterally than I can bilaterally. For example, my best Bulgarian split squat is 335 x6 whereas I doubt I could squat much more than 385x6.

For the best of both worlds, my personal favorite is to start the workout with a heavier single-leg exercise and follow it up with a lighter bilateral "finisher."

I think single-leg work potentially allows for higher training frequency than bilateral squatting. With squatting, twice a week is about all I can handle, and even that's pushing it. When I stick to single-leg variations, however, I'm able to train my legs three times a week.

Single-leg training can help to increase your vertical jump. I can't say if it's any more or less effective than bilateral squatting because I have no point of comparison, but that could make for an interesting study in the future.

I want to eat my words about single-leg work being "foo foo." It's only foo-foo if you treat it as such, or if you suck at it and can't balance well enough to push yourself. Once you get better at it and start moving some weight, it can get downright brutal.

I'm certainly not anti-squatting, but the more I use single-leg work, the more I'm convinced that it can also be a good choice. I like both, and I think both are extremely important.

My goal here wasn't to "prove" anything, but rather to provide some interesting food for thought and potentially spark further research because there's certainly a lot we don't know yet.

But please, before you start theorizing like crazy – do me a favor and go out and try it first.