The rear foot elevated split squat (aka the Bulgarian split squat) has become my primary lower body strength exercise. I don’t back squat, rarely front squat, and when I do, it’s usually with lighter weights.

(Please, hear me out before you slap the wuss tag on me and search for the next “do squats and drink milk” article.)

I still love squats, but I don’t think they’re right for me. I’ve had a long history of back problems (not lifting-related), which culminated in 2005 when I had a surgery to repair a disk at L5-S1. I was just 20 years old.

I started squatting after my surgery because I wanted to make my legs bigger and stronger and had always heard squats were the only way to do it. My legs did get bigger and stronger, but my back was constantly sore. I remember always having to ice my back just to make it to the next squat day, then repeating the process all over again. There had to be a better way.

It turns out heavy squats aren’t the only way to get bigger, stronger legs.

I’d dabbled with rear foot elevated split squats (RFESS) off and on for a few years, but I never really thought of them as a strength exercise until I read Mike Boyle’s article Build Bigger Legs, One at a Time. Shortly thereafter, I got an internship at Coach Boyle’s facility (where I now work), and knowing that RFESS are his bread and butter lower body exercise, I figured it’d be a good idea to get better at them.

It didn’t take long for me to start drinking the Kool Aid, and I haven’t looked back. My experiences thus far have surpassed even my grandest expectations. I haven’t experienced any back pain since my transition from heavy squats to heavy RFESS. My biggest “problem” now is that I’ve maxed out the dumbbells in the gym and have had to resort to loading with weighted vests, chains, and the occasional Volkswagen Beetle (kidding).

My adoration has been bolstered by what I’ve observed from my athletes. We’ve had well over 500 athletes come through the doors in the past year without a single case of low back pain due to the RFESS. There have been a few minor complaints of knee pain that have been quickly cleared up by adjusting the distance of the front leg to the bench (usually moving farther away). Similarly, I’ve heard several complaints of a pulling sensation in the groin and hip flexor of the rear leg (usually shorter and/or inflexible athletes), usually rectified by lowering the height of the bench.

Nevertheless, for someone with a preexisting groin issue, I’d choose some other movement.

Still, when taking into account the sheer volume of athletes that we’ve had perform the exercise on a regular basis, the injury rate is remarkably low, almost zero.

It’s also a very “user-friendly” exercise, meaning most people can do it well. Many lifters struggle for years learning how to squat correctly, and lots never do. Go into any commercial gym and you’ll see far more bad squats than you will good ones. Often, it’s due to poor form and/or mobility restrictions, both of which are correctable with good coaching, hard work, and patience.

If you’re one who’s hell-bent on squatting and are willing to address your limitations to be able to do them well, I applaud you. In the meantime, it still makes sense to employ the RFESS as the risk of getting hurt is far less. If you can’t squat well and continue to do it anyway, you’re just asking for injury.

Finally, there are those who just aren’t meant to squat. For some like me, it may be due to prior injury, while for others it may just be the way they’re built. Many lifters with longer femurs and longer torsos will invariably turn their squats into good mornings, transferring much of the force from the legs to the lower back, which is both dangerous and ineffective. Practice and coaching may improve their technique slightly, but for the most part it will be an uphill battle.

I realize what I just said is akin to strength and conditioning heresy. Many just can’t wrap their minds around the idea that squats may not be for everyone. I’d submit that these people are probably good squatters who haven’t experienced significant back pain in their lives. For those blessed souls, squats are great. I’m jealous of them. But for those with back injuries or who just can’t seem to pull off a decent squat, the RFESS is a better choice.

In the back squat, the limiting factor is typically the lower back. In the front squat, it’s the upper back. In the RFESS, you essentially eliminate those limiting factors and are able to hone in more directly on the legs. Moreover, because you’re not loading the spine as heavily, it doesn’t take as long to recover, so you’re able to do them with greater frequency, potentially leading to greater strength and size gains.

It might seem that stability would be a severely limiting factor in getting strong, but this isn’t the case with the RFESS, which is what makes it the best single-leg variation for building strength. In many ways, it bridges the gap between bilateral and single-leg exercises because you get the benefits of unilateral training while still getting assistance from the back leg to handle heavier loads. The back leg doesn’t do much as far as lifting the weight, but helps tremendously with stabilization, allowing the front working leg to push harder. Technically, it could be argued that the RFESS isn’t even a true single leg exercise at all since both legs are in contact with a fixed surface the entire time.

I don’t care how it’s classified. I just care if it works, and it clearly does.

Switching to the RFESS doesn’t mean resigning yourself to a life with chicken legs. My legs have gotten bigger and stronger over the past year and a half, which doesn’t seem logical until you consider that the vast majority of lifters can overload the legs much more in a RFESS than they can in a squat or front squat.

Exactly how much more isn’t clear – it’s hard to determine exactly how much load is being placed on the working leg during a RFESS since the back leg helps to some degree. If I had to venture a guess, I’d say the front leg bears about 85% of the load, although I’m sure it varies from person to person. It’s also hard to compare the RFESS to full squats because the depth isn’t equivalent since the front leg is slightly above parallel in the bottom position of the RFESS.

We could argue about the minutiae all day. In the end, just look at the numbers. We’ve found that on average, our athletes use about the same weight for the RFESS that they use for parallel front squats. Many athletes that struggle with squatting can actually RFESS more than they front squat!

We’re only starting to scratch the surface with the RFESS. Two years ago, when Mike wrote his controversial article, 225×5 was considered the benchmark. Now we have high school guys hitting those numbers and college guys doing it for close to 20 reps! 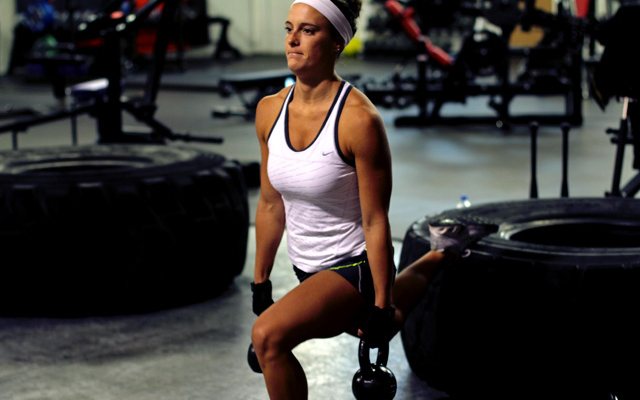 The key to learning the RFESS is first establishing a good setup position and then following a systematic loading progression.

The most important thing is determining how far you need to stand from the bench, which is somewhat individual and will take some trial and error to figure out.

The closer you stand to the bench, the more it will emphasize the quads. However, standing too close may cause knee pain and make it harder to stay upright.

On the other hand, standing too far away can cause pain in the groin and hip flexor of the rear leg and lead to excessive arching of the lower back. You should feel a slight stretch in the rear hip flexor, but no pain. If you feel pain, try using a shorter bench so the stretch isn’t as extreme.

When first starting out, it seems best to start from the bottom up to help ingrain good form. As far as loading, start with a light dumbbell held in the goblet position. 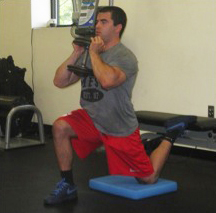 Stick with the goblet hold until you’ve maxed out the dumbbells in your gym or can no longer hold the weight. The goblet hold is great because it forces you into good posture while providing a great core workout.

Once you’ve run out of weight that way, start holding two dumbbells at your sides. You’ll need to be extra vigilant to stay upright because the dumbbells will pull you forward. If using a 90-pound dumbbell with the goblet hold, start with two 50-pound dumbbells. Continue on until you’ve maxed out your dumbbells.

Using wrist straps is fine if grip strength becomes an issue, but only when absolutely necessary. Try to refrain and in time you’ll have a killer grip to accompany your strong legs.

If you find yourself in a position where you’ve run out of weight again, there are several things you can do:

Use weight vests. This is my personal favorite, but I realize not everyone has access to them.

Use a barbell. For people with back issues, I prefer using a front squat grip because it requires less weight and helps ensure an upright torso, similar to the goblet hold. If you don’t have back issues, feel free to put the bar on your back if it’s more comfortable. If using a front squat grip, use the same weight as you would if you were holding dumbbells. If using the bar on your back method, you’ll be able to handle slightly more weight, so plan accordingly. Any time you use a barbell, make sure to use a power rack so you can safely bail if need be.

Increase the range of motion by elevating the front leg on a small step. I love this method, but it’s not for everyone. If you don’t have the requisite mobility, it can wreak havoc on your hips and lower back. Start light and if you experience any pain whatsoever, try something else. I recommend no higher than a four-inch step, which will put most lifters of average height at parallel or slightly below.

Eccentrics. Slowing down the tempo on the eccentric portion of the rep will make lighter weights feel heavier, which is great for both hypertrophy and strength. I warn you though, they burn! This isn’t a technique I’d recommend doing frequently. Rather, it should be employed sparingly and judiciously, no more than once every 3-4 months for three weeks at a time.

1.5 Reps. I picked this one up from Joe Defranco. Do one full rep, come halfway up, go back down again, and come all the way up. That’s one rep. This significantly increases the time under tension and can be great for packing some muscle on your quads. Again, these burn. Consider yourself warned.

Jump. RFESS jumps are a fantastic way to develop single-leg power through a full range of motion.

I’m certainly not anti-squatting. Fact is, if I could do them pain free, I’d probably take up powerlifting as I love moving heavy weights. And if squatting works for you, then do it.

If what you’re doing isn’t working, the RFESS might be the answer you’re looking for. But you’ll never know until you try it. What do you have to lose?