Alwyn Cosgrove, Christian Thibaudeau, and Chad Waterbury were but a few examples of coaches who preferred high-intensity intervals and GPP over steady state "non-panting, low impact" aerobic work. This was never meant as a personal attack on Dr. Lowery (nor is this article) but the debate, which had been going on longer than the Crusades, was back on in full force.

So what happens when you have two opposing ideas and want to know what works best for you? You test it in the real world. Could an original, slightly insane case study finally put an end to the aerobics vs. intervals debate? Possibly, but who would dare do it?

In 1992 I was 297 pounds. Not a bad-ass powerlifter 297 pounds, but a "holy shit look at the fat dude with his head stuck in that bag of Doritos!" 297 pounds. So I did what most do when they finally want to lose weight: I started running.

The first problem occurred on day one. I went one block and puked on the side of the road. It was ugly. I had to take stock of myself, my demons, and my life, all the while hunched over my own vomit. It wasn't my best day.

While trying to compose myself, I decided I'd add a block a day until I could run a marathon. Sadly, I suffered from "stupid stoner fat guy math," meaning I never clued in that if I ran an extra block, I'd have to run that same block back home as well. Stay in school kids, just not in the cafeteria.

After one year I'd lost roughly 60 pounds. But the second problem was that I was never able to run more than a kilometer. Rarely was I able to run without stopping. My target heart rate was always well above that 70% fat burning zone. Quite frankly, it went over 70% every time I pushed my fat ass off the couch! In that first year, every run I attempted turned into interval training: running and walking.

In the following two years I lost another 50 pounds and ran the Seattle Marathon in 1996. The last year I was running over 100 KM a week. So to lose roughly 25 pounds a year I had to do a hundred times more work than my original kilometer per day. I was "chasing the dragon" by that point.

I was now running in that famous "70% target fat burning zone", but my fat loss slowed considerably, and I was trying to outrun my lack of progress. It's the most common mistake the overweight and obese make while trying to get lean. It wasn't until I began weight training that my body composition finally came under my control.

In the years since, I've discovered the biggest difference between those of us in the weight training game and those who are in endurance sports: endurance athletes equate getting better based on how much easier it is to do more work. We associate getting stronger with a willingness to make work even more difficult. I believe this is the root cause of the average Joe's failed attempts at fat loss.

It's an understandable paradigm. The obese are sick and tired of everything feeling like work; the pleasure of their daily lives and exercise routines becoming easier is, by most standards, an obvious sign of progress. This absence of constant strain in daily life is their first sign of "getting healthy."

I believe that the goal of training should be to continue to search for that initial intensity you first felt when everything seemed to work in your fat loss efforts: the "if I keep going, I may die" effect. This is easier said than done.

So it's time to put my money where my mouth is. I'm going to go back up to a big, fat 297 pounds and hopefully prove without a doubt that interval training is superior to steady-state aerobics.

Fall Fashion: It's all about the layers, baby!

Now, if you think I'm going to pig out on junk food and get back up to a 48" waist, you're nucking futs. Nope, no way, ain't going to happen.

What I'm going to do is conduct a basic experiment: I'll run one mile, four times a week, weighing my original 297 pounds. Oh yeah, and I'll be wearing a weighted Xvest to do it. This will be for four weeks, 16 total miles, and 16 total workout sessions (according to my fat guy math skills).

Enter the next problem: one 40 pound Xvest isn't enough to get me back up to that weight. So after a few phone calls I found both a large and medium 40 pound Xvest. I will wear one on top of the other for each run I do. Two Xvests! My chiropractor and ART practitioner are on code red alert.

One medium Xvest + one large Xvest = One more crazy Canadian writing for Testosterone!

I know what you're asking already: "Warren, how's a weighted run for one mile considered interval training?" I'll tell you. I went for a test hill run for fifteen blocks with just one vest. My soul died a little inside. I'm assuming at this point I won't be able to run one mile without stopping and starting as I go. That, my friends, is interval training.

The other side of this experiment will be psychological. See, us FFBs (Former Fat Boys) can get pretty damned cocky about our accomplishments when it suits us. I want to gauge how tough this is over the coming month and if my training in the last ten years since losing the weight has perhaps become a little lax in intensity.

Back in the day, every workout was brutal; there was no other alternative. That's not the case anymore. Have I become soft, like a former all-star playing out a multi-million dollar contract?

I also pulled out all my old fat clothes to wear during each run. Wearing my old stuff on top of two Xvests should mess with my head a little. I want to see just how much it does. I want to see if I have the same issues about being seen in public looking as large as I once did. Every run will be done in broad daylight in a public area. The reaction should be interesting to say the least.

Using Cosgrove's calculations (1) in regards to Dr. Lowery's "100 Workouts" program, the numbers look like this:

Using his upper limit claim of burning 300 calories per workout, every other day, it's a 200-day program – almost seven months. Mine will be 16 workouts in 28 days. I won't count calories and there won't be as many burned. That's not the variable I'm interested in anyways.

I'm not chasing the 1.2 pounds. I'm going after the 8.5 total pounds. Can I beat that number in just 16 one-mile runs? On the forum posts attached to his article, Dr. Lowery himself said, "Doing simplified math, about ten pounds should come off with this type of program: 100 workouts x 350 kcal each = 35000 kcal or 10 pounds of fat."

As a FFB, that kind of math doesn't "get me hard" so to speak. As Chris Shugart will tell you, the FFB community likes change, and we like that change to be big. We've become accustomed to it, maybe even addicted to it. It's no coincidence that the Velocity Diet, Testosterone's most radical and effective diet, was created by a FFB.

We're big experimenters; we'll do the crazy stuff the rest of the T-Nation community is a little too freaked out to try. Dan John recently spoke in Los Angeles, challenging us to compete, to show up, to pay our dues, put it on the line and compete in a recognized forum, and measure yourself against others. I'm taking that to heart.

It's time to put my formerly-fat ass back on the line for all to see. Where better than T-Nation to do it?

My goal is to perform four one-mile sprints for a total of four miles a week, for four weeks. I used www.mapmyrun.com to accomplish this. I've included a steep hill into the mile to simulate my original route from 1992.

As a FFB, skinfold measurements aren't very accurate due to the skin damage I incurred while being a big, fat, lazy piece of shit. I'll be measured before and after the experiment at the University of British Columbia here in Vancouver using the hydrostatic weighing method. Results will be made public in the second part of this series.

Each run must be performed as a max-effort. This won't be a jog, but an attempt at sprinting to simulate the max heart rate effort when I was so out of shape. The sprint may not be "walked out." If I stop on a run, I stop cold then rest standing still and continue when I'm able to do so.

Each sprint must be performed at a minimum 297 pounds. Should I lose body weight during this experiment, this weight must be accounted for by adding an equal amount of compensatory weight to the Xvests before each run.

If at any point I'm able to run the full mile without requiring a stop, additional weight will be added to the Xvest, or (God forbid!) a third Xvest will be worn. This will be calculated based on any time improvements made in the course of this experiment (more fat-guy math).

No fat burners or muscle building/retaining supplements may be used during this program. I'll still use Metabolic Drive in my shakes and I'll use caffeine-free Spike the morning after each run as part of my recovery process and to be able to function during my work day. Yes, I'm assuming this experiment will bust me up pretty bad.

I won't alter my diet or weight training programs during this experiment. I'll still weight train three to four times per week. My diet will still be six meals a day, using John Berardi's Precision Nutrition as I've already been doing so. I'll be using the goal of 90% adherence as outlined in John's Tailor Made Nutrition series. Less than 90% will not be acceptable. This will be in an attempt to keep all other variables constant.

No fasted cardio will be allowed either. I'll do all running in the afternoon or evening after the fourth or fifth meal of the day, as I had back in 1992. Again, the goal, by beating the 8.5 pounds of fat loss, is to challenge the "fasted, steady state cardio as the ultimate fat burning mechanism" idea. My weekly 10km run will also be dropped for the next four weeks.

No music or audio distractions will be allowed during running. I want to be completely mentally engaged in what I'm doing, no diversions. I initially used running as a way to take stock of myself and address the demons that let me get fat in the first place, and it was essential to keeping the fat off over the years. Whatever psychological state or fat-guy flashbacks I experience, I will remain "in the moment."

So there you have it, my Testosterone alumni. A big experiment, putting it all on the line. Will it work? I have no idea. Will it break me from the inside out? I think we all know that answer. Will this become the latest cardio craze? Not friggin' likely.

I'm just out to provide a case study in the ongoing cardio debate. Sometimes its better to win ugly than lose pretty.

Note: Special thanks to both Dan John and Alwyn Cosgrove who both spent a significant amount of time with me in the lounge and the hallways outside of their LA Seminar time, inspiring me to attempt this experiment. 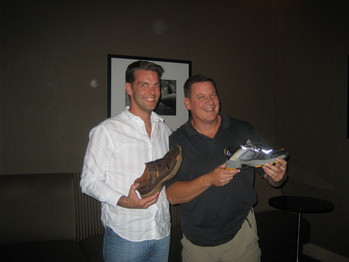 "Dan, what's my body fat percentage going to be after this experiment?"

Master the Romanian deadlift. Here's are two things you gotta do to get it right.
Exercise Coaching, Tips
Drew Murphy February 17 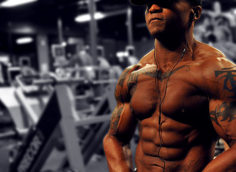 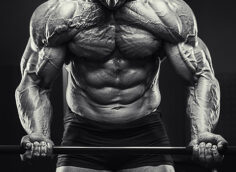 All you need is a bench, a power rack, and a mop to clean up the puddle of sweat when you're done.
Metcon, Tips, Training
Dean Graddon March 1