Have you ever looked at a truly ripped person – a guy on the cover of a magazine or even the rare local gym specimen – and wondered how you'd look with that kind of leanness?

I have. And I'm thinking about it again.

Okay, so he needs more muscle, but you get the idea.

We're going to map out a ridiculously simple plan on these pages to get you there. Although simple, there is so much "below the surface" of this plan – hormonally, temporally and metabolically – that it shouldn't be dismissed as too simple.

Notice that I say "simple" rather than "easy". I do so because there's a key element herein that ruins it for most people. All but the most dedicated athletes fail in their fat loss attempts largely for this reason. It's called consistency and it makes all the difference, even in simple, straightforward plans. But fear not, there's a purposeful attention to daily habits in this exercise-and-dietary plan.

Aha! you say. Now it's exercise and diet? Yes, it is. I admit it. So much so, in fact, that the article title is a bit of a misnomer. Maybe I should've called it "100 Slightly Delayed Breakfasts" or something, but, believe it or not, all exercise is really a combination of diet and exercise or vice-versa.

Now that many of you are slightly puzzled regarding the reciprocity of exercise and diet, we'll get back to the simplicity of "100 workouts". Here's the plan and the challenge:

That's it. Really. And I suggest you consider starting NOW, as February kicks off the real fat loss season for those wishing they could be leaner when the weather warms-up and the clothes come off. Let your fat neighbor attempt the muscle wasting, overly intense, last minute cardio in the months of April and May. You're smarter than that. Now, let's take a look at why our early start at a simple, steady meal/ cardio approach will get many of you leaner than ever before, and why some of you unfortunately will fail to lean out by April.

First comes insulin. Did you know that upon waking (especially if you ate a low carb dinner the night before), your fat-protective insulin concentrations are very low – likely to be the lowest of the entire day? (14) This is good, because insulin has very "persistent" protective effects on fat tissue.(5)

Researchers have noted that: "Plasma free fatty acid mobilization is remarkably sensitive to even small increases in plasma insulin."(1) Of course, you'd need to be at least moderately trained to be able to use the mobilized fat,(9) but I'd wager most of us are.

I even do a half dozen bike sprints after lifting on occasion to help ensure my cardiovascular fitness isn't poor. But back to fasting. It's indeed been suggested that a fast longer than any athlete should consider during the day (4-12 hours, the longer the better) is optimal for various aspects of fat loss.(5, 13, 16)

Want to see something cool?

This makes the hour or two before breakfast the best time to perform longer duration, non-panting cardio. Conversely, this is the probably the worst time to attempt muscle-building lifts. One of the strong and valid premises behind "100 Workouts" is the fact that a bodybuilder (per se) should be in radically different hormonal and metabolic states, depending upon which bodily "compartment" is the immediate focus. Muscle building (anabolic exercise) is optimized by high circulating insulin, which we can control dramatically. It's also affected by Testosterone, of course, but this waxes and wanes much more subtly.

Direct fat loss, on the other hand, is tissue-specific catabolic exercise and is best done in the presence of hormones that are often associated with fasting such as growth hormone and maybe even a little cortisol and glucacon – as opposed to insulin.

As with muscle building, the Testosterone relationship to fat loss is secondary in contribution but suffice it to say that it too "rises" in the morning (which should be obvious to us guys), and that's somewhat comforting considering the relative hyper-cortisolemia that's present during the first three hours of waking.

Okay, endocrinology has been briefly handled. On to why some of those who try this "100 Workouts" thing will fail...

You know as well as I do that if there's a golden rule to training, it's consistency. It supersedes just about everything else. Knowing that this is the difference between you and Maggie McButterpants, who shows up next to you on the treadmill in the gym every few months, let's see how we can stick with it.

This really is ultra-important when moderate "cardio" only expends about 200-300 kcal beyond what we'd burn sitting on our duffs for 60 minutes. (Resting metabolism alone amounts to about 1 kcal per kg for men and 0.9 kcal/kg for women each hour.)

First comes schedule hassles. How many times have you heard someone say "I just don't have the time" or maybe "I missed my afternoon workout today because I had to... (fill in the blank)". Although sometimes unavoidable, we can't let this happen regularly.

One way I've seen persons deal with this successfully is to make the time by waking up 60-90 minutes earlier. Yeah right, Lowery. Listen, if you can manage eight hours of sleep most nights (and thus are getting in reasonable amounts), you can at least consider a trial run.

Here's how I've done it in the past:

Secondly we have to consider habit formation. There seem to be two types of people here: those who can follow an intermittent schedule, and those who need to perform a habit every single day to reinforce it. I'm not a psychologist and this is by no means a scientific description but both types do exist.

In fact, one of the best exercise analogies I've heard is that "exercise is like personal hygiene". It's something that is simply necessary each day. Of course, some guys don't shower or brush or wear deodorant daily either! In any case, it's a good way to look at it.

We should also consider making the light-moderate cardio as pleasurable as possible. A truly dreadful 60 minutes spent staring at the paneling in one's basement might just shut down the whole 100 Workouts effort after a week or two.

Let's be frank. Wall-watching is indeed pure suckage – at least to most people. Here, then, are a few tricks I've used:

Now briefly back to nutrition. For those concerned about waking cortisol – or for basically anyone who has gotten-in 20-25 of these pre-breakfast aerobic sessions – we do have an alternative to all-out fasting.

In the past I personally think that I've benefited from just a quarter-scoop (~1 Tbsp) of protein powder, an egg white or even 3-5g of glutamine or indispensable amino acids just as I'm beginning the "cardio".

As stated, since insulin is one focus here, one might even wait until 10 minutes of the "cardio" have passed. This is a tweak, however, and depends in part on one's somatotype (ectomorphic vs. mesomorphic or endomorphic), his training status, and his personal observations/ experimentation over a month.

One might even consider a small amount of very low-glycemic carbs just beforehand with his java, as some evidence (2, 19) suggests that the insulin response and/or blunting of fat oxidation (RER) is small enough to be intermediate between fast-acting carbs (which would be bad here) and water (which provides no insulin response, per se).

So there you go. Some of you may recognize the gods of exercise physiology among these references. The data aren't new but they are rock solid. Although there's certainly different ways to skin a cat (or rather make yourself look a bit more "skinned"), this particular approach is a direct attack on body fat that importantly does not fatigue most people, drain muscle glycogen, or worsen overtraining risk.

Plus, the biochemistry of direct fat loss is compelling, regardless of what you may see about the equality of divided small cardio sessions throughout the day. (Again, different ways to skin cats... )

While my academic snobbery and cautious consumer advocacy has for years prevented me from doling-out diet plans or exercise plans, "100 Workouts" is as close as I've ever gotten.

You can see, however, that there's still a focus on daily habits and long term success, even though this exploration is mostly meant as a "target date" type of diet – or perhaps a metabolic kick off, as it were, to a future of improved overall leanness. Let's conclude with the benefits of what we've discussed in this article:

Wrist pain is common for those who lift big. Kill the pain by strengthening them and adding mobility. Here's what to do.
Athletic Performance, It Hurts Fix It, Mobility, Training
Tom Morrison April 26 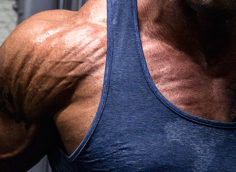 A step by step guide to performing the most bad-ass upper back exercise in existence.
Back, Powerlifting & Strength, Training
Matt Kroc May 14 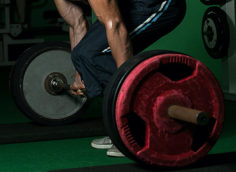