A Basic Introduction to Tempo Training

In the early days of T NATION, strength coaches Ian King and Charles Poliquin were huge advocates of tempo training, and although they didn't agree on how it should be labeled (Poliquin preferred a three-number system, while King preferred a four-number system), they both agreed that strategically using tempo was important for growth.

Both Coaches Poliquin and King also used X to denote lifting the weight as explosively as possible.

Although some coaches are quick to write off prescribed tempos, I feel there are several instances when incorporating tempo can come in handy:

1 Reduced influence of the stretch-shortening cycle

When we slow our tempos down, we shift more stress from the tendons and elastic components of our bodies to the muscles. Quite simply, we're reducing the influence of the stretch shortening cycle and putting more stress on muscles with each and every rep.

Many older lifters have joint-related issues, and explosive or ballistic lifting simply may not be in the cards.

To counteract that and still get a great training effect, slowing down the tempo can reduce joint stress and prolong your lifting career. This is never a bad thing.

By increasing time under tension, we can positively influence changes in connective tissue strength. If you've consistently gone hard and heavy year after year, you know that your body can get beat up from the constant grind. Connective tissue often becomes the weakest link.

Below are some of my favorite exercise and tempo recommendations. Give them a shot but be warned: if you haven't done tempo training in a while (or at all), you're in for a world of (good) hurt.

If the tempo police were out, two of the most notorious offenders would be squats and bench presses.

When guys squat, you'll see many use the dive-bomber approach. They'll un-rack the weight, get tight, and then the whole rep is over in about a second. This method may be ideal if your goal is to move maximal weights in a powerlifting competition, but if your goal is to build serious muscle, slowing down the tempo may provide benefits.

The bench press may be even worse. Every one of us have seen the guy who drops the bar, bounces it off his sternum, and gets it halfway back to the top without using any muscular strength. It's ridiculous.

One of my preferred tempos for squatting and benching is 301. That means a three-second eccentric, no pause in the bottom, and a one-second concentric. You'll still get some minimal influences from the stretch-shortening cycle, but not nearly as much as before.

Dorian Yates (owner of arguably the best back ever in bodybuilding) once said, "If you can't pause the weight at the midpoint for a full one-second, you're not lifting the weight. You're using momentum."

When it comes to back training, I believe a 211 or 311 tempo is ideal. Lower smoothly and under control, take one second coming up, and make sure to pause for a second at the mid point of your chins or chest-supported rows.

This is also ideal for strengthening the scapular stabilizers and keeping your shoulders healthy.

Glute exercises are suddenly en vogue, so it only makes sense to discuss them briefly here. (Bret Contreras may be the glute guy, but I'm still the ass-master!)

Many clients I work with have issues differentiating between hip extension and lumbar spine extension. When they try and perform a seemingly simple exercise such as a glute bridge or pull-through, they over-exaggerate the lumbar arch and get minimal hip drive or glute contraction.

I'm sure it's no news to us that calf exercises are one of those stubborn muscle groups that many people mess up. (My dad actually came into IFAST a few weeks ago, and my business partner Bill Hartman remarked at how he had the second largest calves he'd ever seen. Unfortunately, I didn't exactly hit the same genetic lottery.)

Most guys do calf raises by bouncing at the bottom of the movement. Sure, they use a lot of weight, but they're not getting the full benefit of the exercise. Trust me, if you perform calf raises the right way, you won't be able to walk well for a few days, and you'll gain some significant muscle in a short amount of time.

Whether you choose standing (gastroc dominant) or seated (soleus dominant) calf work is irrelevant. (Although if you are serious about calf-training, I would incorporate both). I suggest using a very slow tempo on the eccentric, and possibly throwing in a pause at the bottom as well. Try any of the following tempos:

By really exaggerating the negative and midpoint, you negate the elastic influences.

At IFAST every client goes through an initial assessment and our basic minimum standards are below:

These are based off the research of Stuart McGill, the worlds' foremost researcher on lower back health.

The key, however, isn't just the time—it's performing the exercise correctly!

Once we put people in the appropriate position (where the back of the head, the upper back, and the buttocks all would be in-line), many can only hold it for 5 seconds at a time. McGill likes to use 5-second bursts in training to develop core endurance and stability, so we'll often prescribe a 151 tempo on both the front and side plank initially.

I know you're tough, but I've still seen more than a few tough guys get totally owned by these tests. Try it for yourself right now and see how you stack up.

Rotator cuff exercises are another great example of how a good exercise can get better by paying attention to tempo.

Like any prehab or rehab exercise, many have a tendency to mindlessly blow through the reps at the end of their workout. Instead, try performing 12 or more reps per set, and using a strict 303 tempo. For you math wizards out there, that's more than a minute of time under tension for each side!

Trust me, you haven't done 'cuff work until you've slowed the tempo down.

Tempo training isn't the be-all, end-all of training, but, like most training concepts, it does have a time and place.

Incorporating tempo training into your program can maximize your strength and muscle gains, as well as give you a break from the constant grind of hard and heavy lifting.

Give a couple of these tempos a shot in your next program and you'll reap the benefits of a bigger, stronger, and more resilient physique!

Elite powerlifter Matt Kroc lives by a code that drives him to do things we find scary and inspiring.
Powerlifting & Strength, Training
Nate Green May 24 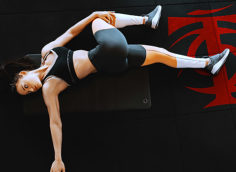 Do you turn sideways and disappear? Then you need to work on back thickness. Pull-ups alone won't do it either. Try these exercises.
Back, Bodybuilding, Training
Lee Boyce April 11