The snatch is arguably the most complex weightlifting movement around. This makes it a formidable challenge to learn on your own when armed with just a textbook or a high-ranking YouTube video or two.

Yet in spite of the long odds, every day thousands of determined lifters give mastering the mighty snatch the old college try.

Often these lifters will scour the internet in search of the ultimate "one size fits all," step-by-step approach to learning the snatch, preferably in 30 minutes or less.

Fact is, most do-it yourself snatch tutorials found online are rigid, if not dogmatic, approaches designed for a very specific type of athlete – the type that possesses certain attributes that have preordained their success in performing the classic lifts.

Sadly, the average gym rat doesn't physically, mentally, or biologically resemble this athlete. So when he tries to follow this program, he ends up feeling like he's pounding the proverbial square peg into a round hole, leading to average Joe-lifter becoming frustrated, disheartened, and eventually quitting the snatch.

This is a shame, because the snatch offers serious bang for the buck in terms of improved body composition, increased muscle mass, and explosive strength. It also improves coordination and connective tissue strength while offering an incredibly efficient way to train by targeting every major muscle group in one single quick-lift.

The ideal way to learn the snatch is under the tutelage and supervision of an experienced, qualified, Olympic lifting coach. Considering that for many gym rats this simply isn't an option, this article aims to provide some basic guidelines to help you on your quest to become a snatch-master.

50% of the Snatch Occurs Above the Shoulders

The snatch should be "like water making its way through cracks," not like ice cracking stone. Let that be our first lesson when it comes to the snatch. The movement should feel smooth and naturally athletic; it should never feel overly rigid, contrived, or cause pain.

The second lesson in learning the snatch involves getting past the common roadblock of paralysis by analysis. It's important for new trainees while in the actual act of lifting to stop running through the processes they've memorized from videos or textbooks. After all, the lift is completed in less than a second, leaving no time to take cognitive corrective action once the sequence of events is set in motion.

The snatch is like hitting a baseball. When you take a swing, you don't think about hitting the ball – you just hit it! You can ponder all the intricacies of the lift before stepping onto the platform, but once you grip the barbell, it's gotta be go time!

As there are many commonalities between snatching and hitting, I'll build on this analogy because I think it's an easy one for most to digest.

Hitting and snatching both take into account the body-type of the athlete. Both require a high level of training to become proficient, and both have been studied extensively in an attempt to build a better mousetrap.

Due to this type of communal effort, certain norms regarding set up and execution have been established. However, the actual acts themselves should be largely open to interpretation.

You may be wondering why and what does interpretation have to do with the snatch? The answer lies in the fact that both snatching and hitting are considered "sport."

If we agree that sport is essentially problem solving through kinesthetics, then the actual interpretation of the problem and the application of a solution are largely up to the individual athlete. This is what differentiates all athletes: their movements, methods, and ultimately their results are what separate the wheat from the chaff.

For example, Ted Williams and Johnny Pesky were both great hitters. However, Pesky was a half-foot shorter than Williams and not as talented. But he excelled at his brand of hitting (bunts, walks, and base hits) and despite his shortcomings, had a lifetime batting average of over .300.

On the other hand, Williams was the greatest hitter of all time, and to help Pesky, offered him some advice on his swing. Williams wanted Pesky to adopt a more upward swing when at bat.

He argued that if Pesky adopted a swing similar to his that, upon contact, it would create a higher ball trajectory, naturally leading to more home runs and less line drives. Ultimately, Pesky refused to change his swing, arguing that he was paid to get base hits and not hit home runs.

This example highlights two successful, yet divergent, solutions to a common problem encountered in a sport based on individual goals. Weightlifting is no different from hitting in this regard. Each athlete will have different goals and attributes and ultimately it's up to the athlete (or coach) to solve their own sport-based problems.

I'd argue that it's the coach's job to "coach" an athlete, not homogenize, dictate or control an athlete's movements, methods and/or interpretations of their sport-based problems.

This takes us to the big question: How do I solve the snatch?

You Are a Special Snowflake

Getting a heavy load from the platform to overhead in one explosive, fluid movement presents the human-body machine with a complex neurophysical problem. To solve it, we need to approach the process like an art, not a science.

When new lifters learn the movement in this way, it's infinitely more enjoyable and effective. That said, there really is no right or wrong way to snatch, you just need to explore every possible solution, one-by-one, until you find "your path." This is an extremely important concept to understand because each individual athlete is biologically, neurophysically, and mentally very different.

However, as an athlete gains experience in solving sport-specific problems like the snatch, he'll develop his own techniques and strategies, which is a critical step in the problem solving process. A coach can provide direction, but ultimately it's up to the lifter to make it happen.

As in hitting, athletes should be encouraged to master the basics of the snatch through repetition. This would include segmenting full-lifts into partials, such as a hang-power snatch to an overhead squat.

After all, a batter needs to learn to hit a fastball before he takes on a curve. If you need more technical information regarding grip, setup, and overhead positioning I'd encourage you to reference my previous article Optimizing the Overhead Squat.

There are three concepts integral to learning the snatch:

1 – The best place to start is from the high hang.

I teach the snatch from the hang because it puts the trainees in a position to easily feel proper hamstring tension. This tension acts as a powerful physical cue, signaling a trainee to accelerate the barbell by violently opening the hips.

To get familiar with this cue, begin with a snatch grip on a barbell in the high hang position. Extend the spine and hinge forward at the hips without bending the knees. Once you feel tension in the hamstrings, slightly bend your knees and return to the high hang. Repeat 8-10 times.

This is the most important physical cue for the snatch. It's your firing indicator. When you're ascending from the floor with a barbell you'll hit this position, whereupon you'll explode upward with everything you've got.

Trainees often get bogged down in the technical aspects of the lift and never challenge themselves to lift heavy weight. You can often learn more from a missed lift than a made one, but only if it's real weight. PVC pipes don't apply!

Don't be afraid to get mad! Snatching should be an exercise in controlled rage. Stomp your feet, take a deep breath, and go! Don't make a spectacle out of yourself but you should feel like you're about to punch someone in the face or, in Donny Shankle's words, "Rip the head off God!"

3 – Hips and shoulders must ascend in unison.

If there's one technical cue that you should take away from this article, this is it. Most new lifters try and rip the barbell off the deck with everything they've got and their hips/butt inevitably shoot up in the air while their shoulders stay put. This creates poor mechanics by causing excessive leverage through the torso, leading to a pendulum-like bar path, resulting in a missed lift.

If you're experiencing this issue, there are several corrective efforts that can be made:

Some examples of what it looks like when a lifter's hips do and don't clear early are shown in these videos. The first is a proper snatch and the second...well, not so proper:

Now that you've been exposed to a more relaxed approach to the snatch, it's time to put your newly acquired knowledge into action. How and when you implement the lift in your training regimen is largely based on your individual goals and training schedule.

With that said, I'd recommend adding the lift to your current workload incrementally. This is done to assess how the new training stimulus will affect your body's ability to recover.

When it comes to snatching frequency and loads, a team sport athlete's protocol will differ from that of the bodybuilder. However, I'd recommend that both types of athletes use segments of the snatch once or twice a week, initially.

Power athletes should implement this protocol in the off-season while omitting the lift during the season to avoid overtraining and the risk of a training injury. The power athlete should start with a power snatch and snatch high-pull protocol, while the bodybuilder can use the same movements and simply add the muscle snatch to the mix.

If you're experimenting with the lift by following my recommendations above, it's advisable to use a density-style format to develop proficiency, power, and muscle mass.

Always perform the snatch first when training but only after an initial warm up. Your non-technical training should be done secondarily.

Here's an example of this type of training:

* EMOTM = Every minute, on the minute
* * rest 5 min. between exercises

* EMOTM = Every minute, on the minute
* * rest 5 min. between exercises

In summation, this article is largely a conceptual piece designed to help novices without a coach. These trainees should embrace the subjective methods presented here and marry them with the myriad of technical approaches available online. This hybrid approach will allow each trainee to develop a uniquely individual snatch.

It should be understood that this article is not meant for advanced athletes; however, the concepts presented here are rooted in athletes' lifting on the world stage. If you watch world-class Olympic lifters snatch, you'll see an array of different styles and techniques. This was instrumental in my belief that there's no "one" way to lift.

The approach offered here is a nontechnical way of developing a functional snatch. My goal with this approach is to present trainees with a flexible method of lifting that will encourage them to discover their athletic potential through trial and error. That said, this type of freedom comes with a great deal of responsibility and honest self-assessment plays a large role in this process.

Due to the technical nuances of the snatch, there's an increased potential for injury, so please be responsible and start with relatively light loads and focus on the snatch as a "sport." Don't fixate on the tiny technical aspects of the lift and have fun lifting in a new realm.

Above all, be patient and open-minded, and enjoy the process. Who knows, if you stick with it, maybe your gym buddies will declare you the reigning snatch master!

Has Mike discovered the Holy Grail of training programs? Has he figured out a way to keep the body from adapting? Can he levitate just by using the power of his mind? Answers to these questions and more are contained herein.
Training
Mike Mahler May 7 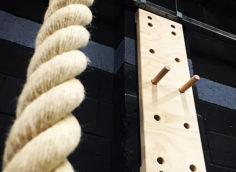 These classic upper-body exercises are making a comeback. Here's a quick refresher on both of them.
Back, Pull-Up, Tips, Training
Nick Tumminello October 6