Plateau is a dirty word in strength training. There's nothing more defeating than to be consistent in every part of the training paradigm and still not see meaningful progress. Typically, the problem is that we get too comfortable in how we train. This means we do all the things we're good at and ignore the things that make us uncomfortable. The solution is to get real uncomfortable.

Of course, there are technical differences concerning how each is performed. The torso tends to stay upright with a high-bar squat, there's less of a sit back, and the quads play a bigger role. With a low bar squat, the lifter tends to bend more at the waist, the hips get involved, and the bar is closer to the center of the body.

When you go back to training with a low bar placement and a belt or with a belt and knee wraps, you should see a tremendous amount of carryover, especially if you program properly in regards to acclimating back to the movement with a better leverage advantage.

Let's examine how to set up a long-term plan for the low-bar squatter that wants to use the offseason to incorporate "harder" variations of the movement to get better.

Pause squats used to be the staple assistance movement for powerlifters. Due to the tremendous increase in raw powerlifting these days, it's become a mainstay once again. For starters, it builds tremendous starting power. This tends to carryover both to the squat and to strength off the floor in the deadlift. It also helps teach the athlete to get tight (try sitting down in the bottom of a pause squat and then letting all of your air out, just for fun), stay tight, and cement what feels best for him in terms of the descent.

Many guys complain that their squat never feels "right." With pause squats you get valuable feedback because when you nail your technique, you'll feel strong and powerful out of the hole. If you're off, it'll feel like a bad day.

For this cycle, pause squats should be done using a high bar, without a belt. For pause length, two seconds will suffice. Just make it an honest two seconds.

A 100% would be what you want to hit in the pause squat for a triple. So if you're a 500-pound squatter, then 425 pounds would represent 85% of your max. Here's the cycle laid out in percentages for the 500-pound squatter:

Of course, a 500-pound squatter might say, "What am I going to get out of using 275?" Often guys scoff at starting light because it's hard for them to put their ego aside. Understand that starting light offers many benefits for ramping up to heavier weights each week.

However, anyone who's ever run programming like this understands how each week builds on the previous. You need to look at training as a slow build to something greater, not as singular sessions that have no relevance to what you'll be doing next week.

The other part of the equation is that this work should be done with as little rest between sets as possible, and each rep should be done with violence, hate, and venom. Perform each rep as if you're trying to send the bar through the ceiling. If you don't think there's a difference in the toll that doing reps this way takes on you, just try it. You'll be very surprised.

After the pause squat cycle, the next step is to program in a cycle of no belt, high-bar squats.

For this cycle, set aside the next 10 weeks and base the programming around your everyday max (EDM). Your EDM is something you could do any day of the week, without much psyche. Basically, you could still do this sick, tired, hung-over, whatever.

Some lifters figure this to be in the range of 90% of their true max. That's not a bad method to use and tends to work well. For the next 10 weeks, you're going to do at least 5 sets of 5 using 60% of that EDM. Again, while this doesn't seem like much, if you perform each rep with as much force as possible and whittle down your rest periods between sets each week, you'll find this to be hard and productive work. If it's just too damn easy, use 70% of your EDM and go from there.

Over the course of the 10 weeks, you'll want to start increasing your volume, up to 8 sets of 5 reps with minimal rest between sets. When you can bang out 8 sets of 5 with very little rest and each rep looks like you're being shot out of a cannon, you will indeed be stronger. I've trained numerous guys this way and the results have been significant every time.

Back to the Low Bar

Now that the lifter has spent a significant period of time working to get better at both pause squats and high bar squats with no belt, he should be ready to take advantage of those gains and apply them to the low-bar squat with a belt and knee wraps.

A simple 5-week peaking cycle can be used to get the lifter ready for either the platform or just to acclimate to the movement again. Use a slightly higher EDM (around 5% more) than what was used on the last cycle. As before, no reps or weights should ever be missed in a peaking cycle.

After this cycle is over, the lifter might decide to test a new max, compete, or just take a week off and decide what to do next. Either way, progress should be significant if the lifter was honest with his abilities, planned properly, and poured energy into the training plan.

Take it easier on your joints and blast through your sticking points with this technique. You'll wish you'd started doing it sooner.
Powerlifting & Strength, Training
Dr John Rusin October 10

A decade in the iron game packs on some serious pounds, in addition to teaching some heavy life-lessons.
Training
Eric Cressey June 17 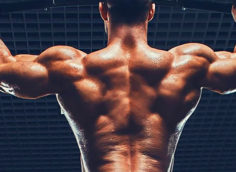 Do more pull-ups and do them with more weight strapped to your body. How? Use this cool training method.
Back, Pull-Up, Tips, Training
Drew Murphy June 29