You might've seen the video of Lebron James doing half squats. The training world went nuts over it, and everybody has an opinion.

The question is, was this a case of a strength coach being "onto something" or a case of an athlete who's amazing despite what he's doing in the weight room?

The internet is both a wonderful and horrible place if you're interested in acquiring knowledge. At no point in time has knowledge been so easily available. But this also means that any dimwit can grace the web with his perspective... and try to berate you into agreeing with him.

On top of that, when it comes to the squat there are very specific applications of the movement that use different techniques and mechanics. And while these applications might be effective for a specific goal, they're not the recommended option for 90% of the population.

The approach I prefer (blame my Olympic lifting background) is a more upright form, which is better for overall lower body development. That's why I like front squatting and the Zercher squat so much. They make it easier to stay upright. Notice the upright position in the Zercher squat:

However, you'll see a lot of people advocating the low bar/bent-over squat as the best way to squat and, just like in Lebron's case, you'll see some athletes squatting with a partial range of motion. So, who's right?

Partial squats are becoming the talk of the town because of Lebron James's half squat video. The argument for using them is that it allows you to load it up heavier in the sport-specific range of motion.

This is something that professor Zatsiorsky called "accentuation." That means using exercises where you're loading only (or primarily) the sport-specific range of motion. So if someone goes down to a 90-degree knee angle when jumping, then during "accentuated squats" he'd squat down to that same joint angle.

While it's true that this approach can be useful if the athlete has already developed a high level of overall full squat strength, it also has some drawbacks.

If you don't have a lot of experience doing full squats and don't have superb technique, then using half squats can be very dangerous.

The 90-degree knee angle is the most unstable in the range of motion, and if you only do a half squat the amortization (breaking) phase of the lift is much shorter. You'll need to slow down faster and stop at the most vulnerable knee angle. The slightest error in body position can be disastrous for your knees or lower back.

But if you have a lot of experience full squatting you'll be more likely to keep the exact same body position during a half squat. Just make sure that at that 90-degree angle, your body is in the exact same position as it would be at that point in a full squat, otherwise the risk of injury increases dramatically.

If you rely exclusively on this form of squatting you'll develop some imbalances. You might argue, "Yeah, but I can add more glute and hamstring work to compensate." True. But the human body has a limited capacity to tolerate volume, especially if you're not using performance enhancing drugs.

So adding 2-3 more exercises for 4 sets each just to compensate for that lack of stimulation in the glutes, hamstrings, and calves isn't good programming, unless you're working with a genetic freak who can recover and grow from anything, which is likely not you (or me).

Every person I've seen use partial squats ends up subconsciously shortening the range of motion more and more. This is especially true when your main focus is progressive overload and you try to use more weight on every workout. By shortening the range of motion even further in order to lift more weight, you'll make the exercise even less effective.

You can use a lot of weight on a partial squat. But if you haven't built the muscles (quads, hamstrings, glutes, lower back, abs) and tendons to support a very heavy weight, your chance of injury will be monstrous when dong half/quarter squats with more weight than your body could handle on the full movement.

This is why people who don't full squat at least two times their bodyweight for reps have no business even thinking about including some heavy partial squatting in their training. Can you full squat more than twice your bodyweight? Reach that goal first, then maybe think about doing partials.

Partial squatting CAN be beneficial to increase the strength in the sport-specific range of motion. I use it with advanced power athletes. But it's only used for three weeks in a 20-week plan. And the partial squats have to be done with perfect positions.

Remember, unless you're already full squatting two to two-and-a-half times your bodyweight, don't waste your time with accentuation. Focus on making your full lift go up.

When looking at Lebron James's partial squat video, keep in mind that:

When doing squats with bands or chains the load is greater in the second half of the range of motion (when you get closer to standing) which allows you to "accentuate" the sport-specific zone. This method of accentuation is a lot more effective than partial movements because:

Olympic Lifts from the Hang or Blocks

You're training the exact same body position/angles as you would be during jumping and sprinting. You're also training to explode from that sport-specific angle. This can help you transfer the strength gains you made doing deadlifts and squats into fast sport actions.

Think of the Olympic lifts (or plyo) as the bridge between strength work and your sport. The main drawback of the Olympic lift variations is that they're a bit more technical (but less than what people think). If you're not competent at teaching them, you shouldn't use them with your clients. 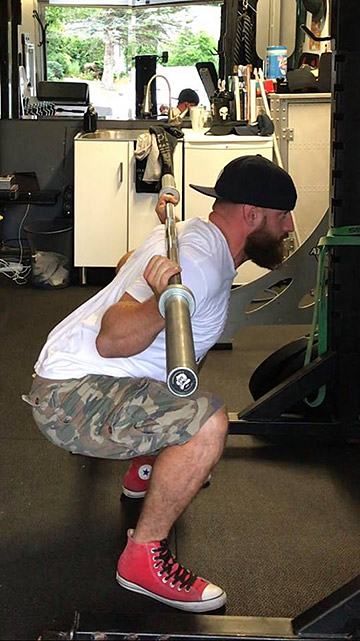 I never liked the term "low bar squat" because you're describing the movement by its less important difference to a more traditional way of squatting. So I refer to it as a "powerlifting squat" or "bent over squat" as these represent the movement much better than just bar placement.

In the powerlifting squat, the sole purpose is to move more weight from point A to point B. The squatter does that by shortening the range of motion by reducing the angular movement at the knee joint, increasing hip movement, and switching the load more to the hips rather than the legs.

This is why the bar is placed lower on the back: so that you can move the hips backward more while bending the torso forward.

The low bar squat is also favored because it allows you to maximize the benefits of the squat suit. A squat suit is a contraption worn by "equipped" powerlifters which supports their body and actually helps you lift the weight because it's getting stretched. With the hip-dominant form of squatting you're stretching the suit more, getting more help from it.

Because of the leverage created, you can move more weight from point A to point B which leads many people to believe that it's the best form of squatting. But weight doesn't equal muscle loading.

The primary goal of the squat should be to maximally develop the lower body, focusing primarily on the quadriceps. Yes, the hip muscles are important for sport performance, but these are emphasized with any form of deadlifting. If you squat like a powerlifter, you might end up with underdeveloped quads, especially if you have long legs relative to your torso.

Note: I say "powerlifting squat" but a lot of the best powerlifters don't use this low-bar style. Ed Coan squatted very upright compared to most powerlifters. Dan Green squats upright (and does front squat) for most of his training, only doing the low-bar style when preparing for a meet.

The powerlifting squat (hip squat/bent over squat/low bar squat) is a more hip dominant squat that reduces quadriceps stimulation. Why? As mentioned, the muscle being stretched the most will be the muscle being recruited the most. In a powerlifting squat the hips move a lot further back, the knees don't travel far forward (the tibias stay almost perpendicular to the floor) and there's less flexion at the knees.

This stretches the glutes more but the quads less. Furthermore, the bent over position puts a lot of loading on the lower back. The powerlifting squat is closer to a deadlift when it comes to muscle loading than a squat.

If your goal is to build your legs and get them as strong as possible, then use a more upright squatting style.

The only people who should use the powerlifting squat are powerlifters. And even many of them should train mostly using the more upright squatting style, switching their competition style 8 weeks or so prior to a meet, during the specific preparation period.

That's also why I recommend wearing Olympic lifting shoes (elevated heels) when squatting: they make it easier to keep an upright torso when squatting. And it's why I believe that for some people the front squat or Zercher squat will be the better squat variation by allowing long-limbed lifters to stay upright more easily.

For maximum lower body development I prefer the full, upright back squat. Partial squats and "bent over squats" have their place – if used for the right purpose, at the right time, and by the right person. But just because your favorite athlete uses it or a lifter you admire did it on YouTube, it doesn't mean it's optimal for you.

Ask yourself: What's my objective when squatting? Is it...

Then make your choice.

Bench presses? Chin-ups? Push presses? Those are all great, but this gymnastics staple is worth mastering too. Here’s why and how to do it.
Bodybuilding, Powerlifting & Strength, Training
Al Kavadlo December 2 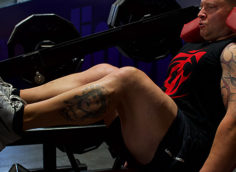 Just a few simple tips can help you get more out of the leg press. Here they are.
Training
Andrew Coates December 10