The key to developing delts that have a round, three-dimensional look is to proportionally develop all three heads. That way your delts look full whether viewed from the front, rear, or side.

This will typically manifest itself by significant internal rotation of the shoulder. In other words, your palms face more to the rear as opposed to your side when you're standing relaxed.

This probably has to do with 1) your love for the bench press and chest training in general and 2) your propensity for giving more love and attention to muscles you can see in the mirror, you vain bastard.

On the other hand, there are people who shun direct anterior delt work while prioritizing medial delt development to the point where the middle delts are thick while the anterior delts remain shallow and underdeveloped, especially when viewed from the side. 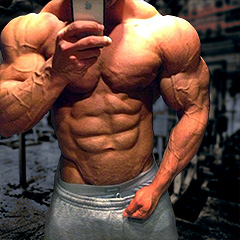 Before you embark on the journey to develop well-rounded delts, you're going to first have to figure out where you are currently in your delt development. That way you can prioritize accordingly.

Take pics of yourself with your arms to your sides and palms facing your sides. Take additional pics from the front, rear, and side.

Let's say that when viewed from the front, your shoulders should have some roundness to them. In bodybuilding circles we call this having "capped" delts. If your shoulders aren't capped, your shoulders will look narrow, regardless of your biacromial width.

If your shoulders have a narrow bone structure (think Phil Heath) and/or you have a wide hip structure (like Jay Cutler), capping your delts off nicely is the remedy you need. You'd do this by emphasizing your middle delts via lateral raise variations.

On the other hand, if, when viewed from the side (relaxed or in the side chest pose), the front of your shoulders lack fullness, then you'll obviously want to focus on your anterior delts. You'll do that primarily via front raise variations and overhead press variations.

Similarly, if it's the rear aspect that lacks fullness, you'll emphasize your posterior delts via shoulder extension and external rotation movements.

Keep in mind, though, when assessing your posterior delts, that it's typically a shorter muscle with a very different look than the anterior delt. As such, don't expect them to look just like your anterior delts. To help you further assess you rear delts, use the rear double biceps pose. 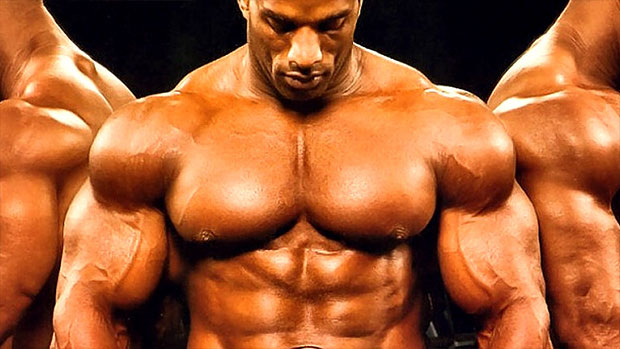 Let's go over a few shoulder-training basics before diving into specifics. I'm going to presume you're going to train shoulders every 5-7 days.

We could talk about the pros and cons of pairing various body parts together, but for now I just want to point out that if your shoulders are lagging, don't train them after chest. Instead, separate your chest and shoulder workouts by two or three days. That way you can begin your training day with shoulders while you're fresh and chock full of energy substrates.

Additionally, while it's certainly valid to train posterior deltoids on "shoulder day," I think it makes more sense to train them with back. That's because the rear delts function like a back muscle. In other words, they help pull your arms down and/or back.

So when you're doing shoulder adduction (pull-ups), shoulder extension (dumbbell rows), horizontal abduction (overhand rows), or pretty much any combination thereof, your rear delts are going to be heavily involved whether you like it or not.

Generally speaking, three or four good work sets of one rear-delt isolating movement should suffice. Work sets are simply sets that aren't warm-up sets, thus they're taken to concentric failure, or within a rep or two of concentric failure.

One direct exercise might not seem like much, but remember that one of the functions of the rear delts are to externally rotate the humerus. So, if you're doing some sort of shoulder external rotation exercise each week (like you should be), along with your back training, a few sets of one exercise will probably be enough.

However, if your rear delts are seriously lagging in development, then do two rear-delt isolation exercises. Keep each of them to just three sets. Here are three effective exercises to choose from:

Be aware that these aren't triceps kickbacks. These are more of a reverse flye movement where you don't bend your elbow and you kick your arm back using only your rear delts, which is why I call them rear delt kickbacks.

Avoid retracting your shoulder blades so that you isolate the rear delt. Keep in mind that the function of the rear delt is simply to move the humerus back, not bring the shoulder blades together. I cue this by telling people to keep their scapulae still and then bring their arm back by "pinching" with their rear delts. If you do it right, you'll know what I mean by pinching.

Regardless of what exercises you do for your posterior delts, there are a few biomechanical principles to keep in mind. For starters, to maximize the work of the rear delt, train it in its optimal line of pull, which is with your shoulder abducted (away from your side) ~30-45 degrees.

Likewise, the pinky side of your hand should lead the way. That lines up the posterior delt so that it'll do the brunt of the work.

When isolating the rear delts, the challenge for most people is to actually isolate them and feel a good, strong contraction. For that reason, generally stay on the higher-rep side, 10-15 reps. Going heavier with fewer reps every once in awhile is certainly valid, but wait until your rear delt neuromuscular efficiency is really good before you go heavy. 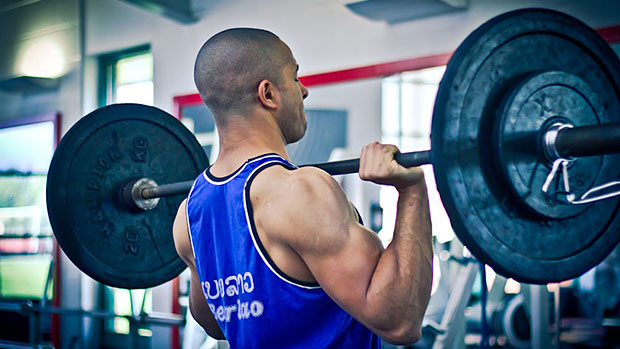 It's a good idea to nearly always do some variation of an overhead press in your shoulder workout. After all, pressing overhead is a fundamental movement pattern.

If your anterior delts are a strong point, then focus primarily on the overhead press, with the occasional front raise variation thrown in for good measure. This, combined with the stimulation they'll receive in your chest training, should be all they need.

On the other hand, if you need to actually bring up your front delts, then you'd generally want to do one front-raise exercise in addition to overhead pressing.

Regardless of the front raise variation you choose, make sure to raise the bar to ~ 110 degrees, roughly level with the top of your forehead. That's where peak contraction of the anterior deltoid occurs, not at 90 degrees, which is where a lot of people stop. 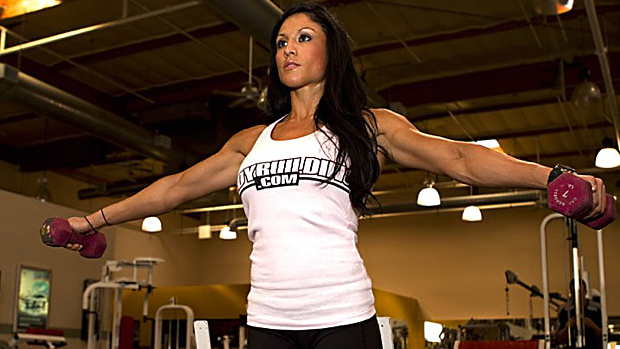 If you want bodybuilder-looking shoulders, you should always include a lateral raise variation to emphasize the middle delts, the most fundamental of which is the standing dumbbell lateral raise.

While a lot of people do lateral raises, most don't do them correctly.

To optimize the line of pull of the middle delts, your palm should be facing down in the top, contracted position. Or if you really want to fine tune this, tilt the thumb-side of the dumbbell down a few degrees so that the pinky-side is up.

Likewise, your wrist, elbow, and shoulder should all be level at the top. Another way to think about it is that the pointed part of your elbow (aka, the olecranon process) should be pointing straight backward, not down toward the ground.

At the top of the movement, most people tend to have the thumb-side of the dumbbell tilted too high and their wrist higher than their elbow. That's because this movement pattern allows the more dominant anterior deltoid to help out more than you want it to.

People who have overactive upper traps also tend to shrug the dumbbells as they near the 90-degree finish position. To avoid this, think about pushing the dumbbell away from you, toward the sides.

Don't worry about doing any other lateral raise variation until you've gotten your form down on the basic dumbbell lateral raise. When you're ready for some variations, try behind-the-back cable laterals, finishing in the same position mentioned above.

For more variation, you can change the point of maximum tension (and stimulus) by doing one of the following unilateral versions:

If you need to bring your middle delts up, typically do three sets of two different shoulder abduction (lateral raise) exercises. Do one with 3 sets of 8-12 and the other with 3 sets of 12-15. And, as is always case, go heavier or lighter every once in awhile.

Take your lifting preparation as seriously as you take your lifting. That doesn't mean you have to devote half an hour to it. Here's what to do instead.
It Hurts Fix It, Mobility, Soft-Tissue Techniques, Training
Ben Bruno October 29
Look around your gym. Most trainees lack the calf thickness to suspend a pair of double striped knee socks, let along balance out the size and symmetry of the lower leg. Now look in the mirror. Are you one of them?
Training
Don Alessi July 4 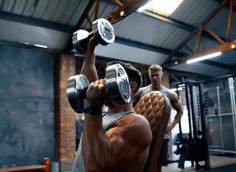