Ever grasp the bar with such might that you swear you heard it scream?

Okay, maybe, just maybe, that was a daydream about strangling one of those "deadlifts are the devil" yahoos who found themselves on the wrong side of the stacks.

But whether you're a powerlifter, bodybuilder, or an athlete from another sport, a cast-iron grip is the connection between you and a massive deadlift.

Whilst the grip training methods we'll describe are predominately performed to improve deadlift performance, they'll help every single exercise you do in the gym. The Law of Irradiation states that: "A muscle working hard recruits the neighborhood muscles, and if they are already a part of the action, it amplifies their strength!"(1)

The bench press is a great example; the harder you can squeeze the bar, the harder you'll be able to activate your triceps and the stronger your bench will be.

Also, with a stronger grip, we've found that deadlifts can be pulled faster from the floor because you aren't worrying about your hands coming open and missing the lift. Therefore, we can conclude that huge grip strength is essential to reaching your potential in terms of explosive power and absolute strength.

Between the historic 1003-pound and 1008-pound competition deadlifts, Andy Bolton missed pulls of 1000-plus pounds five times. The reason was the same every time: He couldn't hold onto the bar. In the approximately 30 months between these two pulls, the only thing that was dramatically changed in his training was his grip work.

What follows is the method that contributed to a weakness becoming a strength. If you watch videos of the 1008-pounder, you'll see that it's held at lockout for a few seconds with no problem.

Weak grip no more, or, as Pavel would say, "Grip power to you."

We train four times per week. The deadlift is trained on Wednesday, and grip work is performed on Saturday. We advise you to do something similar by keeping 72 hours between your deadlift and grip training. This keeps the hands fresh for both activities and allows you to maximize strength gains. Make no mistake, the grip training we'll describe involves total body exercises that are physically and mentally demanding.

We've tried performing these exercises after specific deadlift training on Wednesday and found it too taxing to do all in one session.

For powerlifting, various set and rep schemes can be highly effective when training grip. To make continuous physical progress and prevent boredom the hands must be subjected to a variety of stimuli. This means that neither one exercise, nor one set and rep scheme will work forever.

With that in mind, for grip training, the following methods are highly effective:

A powerlifting competition requires three attempts on the deadlift, and possibly a fourth if you're attempting a world record. Each attempt lasts only a few seconds. For this reason, out of the methods listed above, we've found that time holds for a short duration (10 seconds) and multiple low rep sets, produce the best gains for increasing grip strength on the deadlift.

If you compete in a different sport, such as strongman, which requires you to perform events that rely on strength endurance, then timed holds for longer durations (such as one minute) and higher rep sets can be very useful.

The obvious prerequisite for performing this exercise is a fat bar! If you don't have a fat bar, we highly recommend buying a pair of FatGripz. These will enable you to make a regular Olympic bar much thicker. They are also very easy to use, durable, and cheap.

Set the bar up on blocks or on power rack pins so that you're pulling from just below knee height. Then simply perform the movement as you would a conventional deadlift. The only difference being that you'll take a double overhand grip on all reps.

You can use any of the aforementioned set and rep schemes for this exercise. You can also perform it with or without chalk, the latter being far harder. For even more variety you can wrap a t-shirt or foam around the bar to make it thicker. This ramps up the difficulty even more.

To set up this exercise take an Olympic bar and rest one end on a bench. There must be a small weight plate on this end to prevent the bar from falling over the bench when you deadlift it (see picture for set up).

On the other end of the bar, place two Olympic plates with the smooth side facing outwards. Don't get it the other way around as it totally defeats the purpose of the exercise! You'll need a collar to stop the plates from moving.

People with a fairly strong grip may be able to start with two 45-pound plates, but we recommend that the average person starts with 35 pounders.

To add weight, use a 10-pound plate first. Then add whatever you want on top of that. This setup is essential for lifters with large hands. You'll realize why when you try the exercise.

To perform the movement, take a semi-sumo stance (feet just outside the plates). Set up as you would normally for your deadlift: arched lower back, relaxed upper back, and perform your desired number of reps and sets/timed holds.

Getting the Most from These Exercises

On both grip exercises, it's imperative that you squeeze the bar/plates as hard as possible throughout each and every rep. We've found that most people don't do this, and it actually helps if they get verbal cues to do so. Over the weeks, this skill becomes more instinctive, and when you come back to a regular bar, it'll feel like a toy.

As you can see, with a little imagination you can make and break many personal records on these two exercises.

For variety, don't be afraid to occasionally use grippers, hang from a pull-up bar, or perform any other grip work you like, such as high-rep dumbbell rows or high-rep shrugs. Oh, and of course, the odd week off from grip training may be called for from time to time to allow your hands to recover. Just make sure you use fat bar partial deadlifts and two- handed pinch grip deadlifts most of the time.

There are many ways to get a strong grip. However, the two exercises highlighted in this article are the ones that have enabled a dream like a 1008-pound deadlift to become a reality.

They've also been used by the entire team at Rall's Gym in Leeds, England, where our powerlifting team trains. This team comprises one 1008-pound deadlifter, one 800-pound deadlifter, and over ten athletes who have deadlifted between 600 and 799 pounds in competition.

According to Professor Verkhoshansky, "Special physical preparation must...have similarity to the competition exercises." (2) And what better way to get specific strength for the deadlift than by performing a deadlift movement with a far harder object to hold than a regular deadlift or Olympic bar. 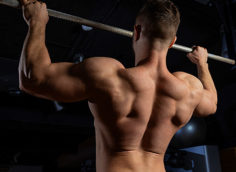 This is gonna hurt, but in a fun way that leads to more muscle growth. Take a look.
Training
Christian Thibaudeau April 30

This training method not only works fast, it's also extremely satisfying if you like heavy weights. Check it out.
Bodybuilding, Powerlifting & Strength, Tips, Training
Eric Bach May 1

The leg press is no slouch when it comes to building leg size, especially when you use these thigh-splitting variations.
Bodybuilding, Training
John Meadows November 21