The Best Butt Exercise What!?

Based on the appearance of many of its female inhabitants and the role this muscle plays in their popular culture, Brazil appears to be the gluteus maximus epicenter of the world.

It makes sense, then, that a group of Brazilian scientists would devote some time figuring out which exercise ruled all the others in strengthening the bundas of their population.

To do so, this gluteal Council of Elrond collected all the glute research articles they could find, 1,963 of them, and after applying very specific quality and inclusion/exclusion criteria, they whittled it down to 16 studies.

Based on information gleaned from these 16 papers, the scientists evaluated how well each of 24 different exercises activated the gluteus maximus. At the top of the list? The step-up and all its variations.

Glute exercises with generally far better reputations, though, like the hip thrust and back squat didn't do nearly as well.

This was all incredibly surprising to me (and probably a lot of people in the strength biz), but before I explain why, let's first take a look at exactly how they got to choosing the step-up as the king, along with the exercises that brought up the rear.

The 16 papers chosen by the Brazilians had the following things in common:

The 16 papers reported on 231 participants – 90 of them women and 141 of them men – who collectively underwent 24 exercise variations.

They then categorized exercises as having one of four different levels of activation:

At the top, way at the top, was the step-up, with an average activation level of 169.22 percent, followed by these step-up variations:

Where did the highly touted barbell hip thrust rank? Thirteenth, even though its average activation percentage of 65.87% still put it in the "very high activation" category.

And the almighty full back squat? Dead last at 26.56% activation!

Below is a table illustrating results for all 24 exercises:

The researchers categorized the step-up and its variations as having a "higher excitatory demand" because the unilateral movement extends the hip joint while simultaneously maintaining pelvis level and controlling excessive femur adduction and medial rotation.

That's all well and good, but let's look at some of the limitations of the study as they pertained to the step-up. First of all, at no point did they describe proper step-up form, or even what constituted a proper step-up. Neither was their any discussion of the height to which trainees were stepping up to.

Plus, the researchers themselves admitted the following:

"...chronic studies have suggested that deeper squats, or a combination of different ranges of motion, induce the most substantial functional and muscular gains, possibly due to more considerable time under tension, and longer muscle length."

A-ha! Back squats, while taking last place in percentage of MVIC, have historically proven to lead to the most muscular gains. Obviously, an exercise's average percentage of MVIC is not the sole arbiter or even the best arbiter when it comes to deciding its worth.

That being said, the step-up, if performed in a very specific manner, could very well be the best glute exercise, but that statement comes with an F-ton of provisos.

Let's be clear here, none of the 24 glute movements tested by the scientists are garbage movements and your routine should be a mixtape of many or all of them.

Besides, there's a lot more to making an exercise worthy than its percentage of MVIC. Mechanical tension, of course, is huge, but that gives us a clue as to why step-ups don't usually pan out in real life.

When doing step-ups, the impetus of most lifters is to hang onto weights because bodyweight exercises are generally anathema to the weak-egoed. The problem is, this additional resistance makes it nearly impossible for all but the strongest to do the movement correctly.

As Christian Thibaudeau pointed out in his great article about step-ups, most people start the movement by pushing off the floor with the trailing leg, in effect doing a little, eek-I-saw-a-mouse jump to get things started.

This initial push brings the lifter about half-way up, at which point they bend the torso forward to gain a tad more mechanical advantage, followed by a simultaneous back and leg extension.

The targeted glute might indeed, as the Brazilian researchers determined, be achieving 169.22% of MVIC, but probably just because of the high degree of stabilization required.

Then there's the eccentric or lowering part of the movement, which is almost universally botched by 99.99% of the people who do step-ups. Rather than lower themselves slowly, they fall back to the earth like a bowling ball dropped off a highway overpass.

And this horrible form becomes increasingly likely as lifters pick up heavier weights, so much so that, as Christian wrote, "...you have an exercise that'll do ZERO to build muscle. The target muscles are never significantly loaded and you can't control the eccentric."

And that stratospheric MVIC seen in the Brazilian study? It means nothing unless you learn how to do the movement correctly.

First of all, do yourself a favor and bypass the conventional step-up and choose the second exercise on the Brazilian list: the lateral step-up, where the bench is at your side instead of in front of you.

Then follow Christian's three important instructions, plus one that I added:

Do your step-ups as described and they really might be the glute exercise to rule them all. 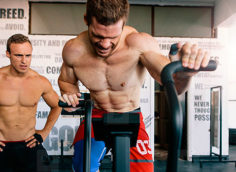 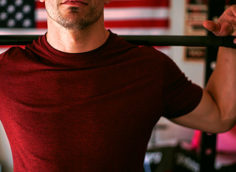 Here are some proven strategies for all-natty size and strength gains, and how to put them all together into a workout plan.
Bodybuilding, Training
Eric Bach October 26