It's hard to judge just how much we lost when the press went out of fashion.

The very important basic exercise you may know as the "shoulder press" or the "overhead press" or the "standing press" really needs none of these qualifiers.

Of course you use your shoulders; of course the bar goes over your head; and you're standing when you do it. And the "military press" is a different, stricter exercise, with none of the torso movement used in the "civilian" version that's known simply as "the press."

All this civilian motion under the bar is an important part of the oldest upper-body exercise in the catalog and makes the movement an indispensable part of an efficient strength program, especially for sports.

This is why I lament its apparent passing and why I'm doing what I can to restore it to the place it deserves in barbell training.

Look at this video:

It shows the great Belgian lifter Serge Reding pressing 502 pounds in 1971 at the Worlds, after the clean. This man was strong. It's quite likely that you don't know anybody that can press their own bodyweight, let alone 502 pounds.

There isn't a human being on the planet today that can press 502 pounds overhead from a standing position, much less clean it first.

And here's how far we've regressed from 1971: three minutes after Reding did this magnificent press, Vasily Alexiev beat him by 5 pounds. Granted, he had quite a knee kick, but again, there's no one alive today who can do it.

Doesn't that make you feel like we've lost something, collectively? As a species? It does me, and there ought to be men that can do this. Maybe it'll be you.

The clean and press was the first lift of what used to be done in Olympic weightlifting, before O lifting became supplanted by powerlifting and bodybuilding in the USA, so there was obviously more pressing done at the time.

But you already know this shit, right? The real question is why we became content to stop doing a fundamental barbell exercise that predated its formal inclusion in the Olympic games by decades.

The press may be the most obvious thing to do with a barbell. The bar is lying there on the floor, looking at you as if to say, "Come on, press me over your head. It's the obvious thing to do. Can you, boy? Are you strong enough?"

And you say, "But I'd rather press you after I lie down on the bench over there. That's just as cool, right? It makes my pecs bigger too!" So the bar says, "Well, if you have to, put me in the rack and then press me overhead from there. That's still a man's press."

But you say, "Aw c'mon, bar. Just load up in the bench and let me press you that way. I can do more weight on the bench, and I can work my chest." Finally, the bar says, "Okay, fine, have it your way, pussy."

Because this is really the deal: the bench press lets you handle heavier weights, and there's a place for that. The bench is a legit lift. And "chesticles" are handy at the beach, I get that.

I had to confront this myself. I made the error of training the bench press for 15 years without heavy pressing, and it got me two shoulder surgeries (the press keeps your anterior and posterior shoulder strength in balance, the bench doesn't) and the realization one day that I couldn't correctly press 35% of my bench. Which is bullshit.

I understand the vast majority of elite benchers manage to get that way without press training, and I'm quite sure that even the most amazing bencher of all time, Big Jim Williams (700 in a T-shirt), didn't press 500 as a part of his bench training (on second thought, maybe he did?).

I understand that powerlifting is a separate sport, and that specialization occurs in all elite competitive sports. I understand all that shit.

But I'm talking to you – not 600 raw benchers – you narrow asses. You guys who are just trying to get stronger.

Look at the video again. Doesn't this make you want to be more like a man that can press double his own bodyweight overhead, and less like you? Are you immune to the sight of a mastodon like Reding cleaning 502 like it was just a formality, and then pressing the thing overhead in little more than one second?

Why has it been 40 years since this kind of thing was done? Even if it was taken out of the competition, shouldn't somebody still be able to press 500? If for some bizarre reason they decided that the 100 meters was too hard to judge and dropped it from the Olympics, would people just stop running this obvious distance for time?

There was a time when any guy training in a gym could press his bodyweight; that was considered a good start (like 300,000 lawyers at the bottom of the ocean). A strong man could do 75 pounds over his bodyweight. Do you personally know anyone that can?

I don't know about you, but I feel like apologizing to the barbell every time I train the press, because, if nothing else, I have an accurate perspective of where I stand in the Grand Scheme of Things, and I'm embarrassed for us all.

I promise that getting that strong overhead will not hurt your bench press in any way. It takes very strong triceps and delts to lock out a heavy press with completely extended elbows in a narrow grip press, and that's always come in handy for me when I was benching heavy – even though I lacked the sense to train them with heavy presses.

Even more important is the effect heavy presses have on your torso strength. Imagine stabilizing 500 pounds overhead, even for a couple of seconds. Imagine the long trip the bar takes from your shoulders to lockout, and what your whole body has to do to make this happen.

Swiss ball sit-ups, Swiss ball alternate-arm seated 3-pound dumbbell presses, Swiss ball prone alternate-leg alternate-arm ipsilateral raises, and anything else done on a Swiss ball may be really great for your "core" (the C-word, and I don't usually use it at all – I'm above that). A bodyweight+ press is a huge stress on the whole man, and the response to this stress in every single muscle from your head down to your toes is a stronger everything, not just a few muscles on either side of the spine, ipsilaterally.

I understand that presses don't fit nicely into most popular "Build a Bigger Better Badder Bench" programs but I trust you can think for yourself well enough to work them in, even if it means giving up some benching time.

Because getting your press up is a worthy goal in and of itself, even if it costs you some bench press (which it probably won't, and if it does, the universe will forgive you).

Remember who I'm talking to here: your narrow asses. Not 600-pound benchers at Westside who decided a long time ago what they wanted out of the deal and what it would cost them to get it. You just want to get stronger, and if you're not strong overhead, there's an important hole to fill.

But let's say, just for the sake of argument, that the time taken from bench press training drops your bench from 300 to 275, while it brings your press up to 185 from exactly shit. That gives you a press/bench press ratio of 0.67, or about 2/3 press to bench, a decent strength distribution, and a much better place to be when your bench goes to 350.

Your press can follow the bench on up and keep your shoulders in proportion much easier after you do this important anterior/posterior balancing work, thus staving off the dreaded Mumford Procedure looming in many heavy bench specialist's future orthopedic surgery schedule.

And if you decide to be the next Serge Reding and go for a double-bodyweight press for its own sake, I'll also advise you to not stop benching heavy, because the two lifts feed each other – in both directions.

One of my several problems with modern Olympic weightlifting is that most lifters – and probably all their coaches – fail to recognize a role for the bench press in overhead lifting. When Olympic lifting stops being a strength sport, the bench press can be forgotten as a potential contributor.

But as it stands now, the vast majority of American weightlifting coaches don't even recognize the obvious role for the press in training the snatch and the clean & jerk. And look at how well this approach has worked! I'll leave this research to the reader.

My point in all this bitching is to impress upon you the fact that your strength is not complete until you make it complete. For years I was content to believe that squat/bench/deadlift was all any athlete needed to do to build a strength foundation.

I learned about holes in my strength the hard way, long after it was easy to fill them in, as a younger man can. Take the opportunity this particular knock has presented, and listen to me: Get your press up. Your bar is telling you the same thing. 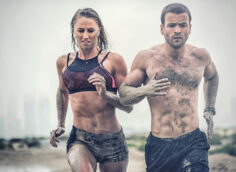 Are you a beast with the weights but suck at cardio? Sign up for an obstacle race anyway! Here's how to prepare for one and not suck.
Challenge Training, Metcon
Domenic Angelino January 11

Use submaximal isometrics to build better triceps. Hold your first rep isometrically, then do 8-12 regular reps.
Arms, Bodybuilding, Exercise Coaching, Tips
Eric Bach May 4
Ian King is back with another of his legendary 12-week programs, this one an arm-specialization routine designed help you build a hefty pair of .44 magnums that even Dirty Harry would envy.
Training
Ian King July 14