What's the point of being big and strong if you're always hurting? Nobody cares about your deadlift numbers if you throw out your back every time you sneeze. And your barrel chest isn't very impressive if you can't lift your arms high enough to put on deodorant.

Sure, various bumps and bruises are inevitable, but training should enhance your quality of life, not detract from it.

Most of us begin lifting because we want to feel better, look better, and get strong. But why do so many of us forget about the "feel better" part? It doesn't mean you need to stop training hard. Strength and muscle are the cornerstones of resilience and longevity, and the best prehab and rehab method is smart training.

Choose exercises that build strength and muscle while simultaneously improving overall function. Here are seven of the best muscle-building, joint-sparing exercises that all lifters should be doing.

The barbell bench press is the king of all upper-body exercises, but it has a couple of drawbacks. For starters, it's not that great for pec development. Since the bar inevitably hits the chest on each rep, it restricts a full range of motion. So the pecs offer little to no help after the first third of the movement. It's also notorious for wrecking many lifters' shoulders.

While the dumbbell bench press is a worthy alternative, the squeeze press has shoulder-saving, hypertrophy-inducing benefits too. It involves squeezing two dumbbells together as hard as possible throughout the duration of each rep. The squeeze press has three advantages:

There's no denying that upper traps – the type that resembles two softballs on each side of the neck – puts the finishing touch on the power look.

Problem is, most lifters train the upper traps solely via scapular elevation, or "shrugging," despite the fact that their most vital function is upward rotation. Since upward rotation is one of three movements that the shoulder blades need to go through to lift the arms overhead, it's pretty important.

Most go-to trap exercises – namely, the barbell shrug and its derivatives – can do more harm than good for those who struggle with bad posture and overly depressed scapulae.

In particular, there are three red flags that occur upon the descent of a shrug: 1. The bar/dumbbells pull the shoulder blades down into scapular depression. 2. The upper traps are lengthened, which makes them less effective upward rotators. 3. The downward rotators of the scapulae become overactive.

Combine that with how they're most often performed – through a small ROM and with unnecessarily heavy loads – and the result is internally rotated shoulders, an inability to lift the arms overhead, and, consequently, a laundry list of postural problems, mobility limitations, and shoulder pain.

Overhead shrugs are a better way to train the traps. Here's why:

Most lifters have no business pressing a barbell overhead. Due to mobility limitations, a weak anterior core, poor posture, etc., overhead pressing (for most) is on par with hopping into the zoo's gorilla exhibit and punching the smallest one of the bunch square in the noggin. Sure, you feel strong in the moment... until you're forced to square up with King Kong's brother.

Luckily, the landmine press has become a godsend for lifters wanting to beef up their shoulders without disintegrating their rotator cuffs into an atrophied pile of dust.

But there's still a problem. While the one-arm landmine press (the most common variation) is an exceptional exercise, it becomes difficult to use heavier loads when other limiting factors set in. An alternative option is to interlock the fingers and press with both arms, but doing so changes the integrity of the exercise.

The two-arm landmine press (or Viking press, if you have the attachment) solves this problem. Here's Paul Carter doing the Viking variation:

It can be set up in a number of ways given some creativity (two landmines as shown in the first video, or two bars across the safety pins). Here's why it's worth doing:

While no particular exercise is mandatory, the single-leg deadlift (SLDL) may be the one exception to the rule – especially if you want to add muscle to your flat-as-a-pancake glutes, show off your athletic prowess, and bulletproof your lower half.

Ironically though, many lifters are quick to dismiss SLDLs as a cute corrective exercise, despite the fact that those same lifters need eight ibuprofens to make it through a workout. Make no mistake about it though, SLDLs can (and should) be loaded up.

That's where the BANA method (bilateral assisted negative accentuated) comes in. It was popularized by Joel Seedman and involves doing the concentric (lifting) phase of an exercise with both legs – in this case, a deadlift – and the eccentric (lowering) phase with one leg.

The BANA SLDL should be a mainstay in every training program. Here's why:

You'd be hard-pressed to find many exercises that check as many "functional" boxes, but they're often thought of as being a fluffy, manhood-robbing corrective exercise.

As mentioned in 7 No-Barbell Strength Tests You Need to Pass, however, there are plenty of benefits to loading up TGUs, and I'd argue that holding a 100-pound ball of cast iron over your skull is as about as manly as it gets.

Here's why the TGU is a non-negotiable:

Training through multiple planes of motion is a must. In particular, being able to move with strength and power through the frontal plane (side-to-side) is essential for anyone who plans on being a human being outside of the gym.

The lateral sled drag is essential since it's one of the only exercises that combines dynamic frontal plane movement with the ability to add meaningful load. Here's why it's so valuable:

But the Valslide reverse lunge is in a category of its own, and what it looks like – a knee-dominant movement – hardly matches up with what it feels like. In a way, it's a lot like the trap-bar deadlift in that it combines the best of the squat pattern with the best of the deadlift pattern, albeit in a unilateral fashion.

It delivers a number of unique benefits: 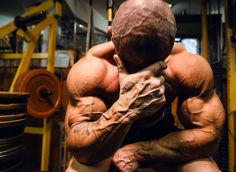 Here's how to save time, boost motivation, and supercharge your results by dropping the fluff and focusing on what actually matters.
Training
Adam Vogel October 27 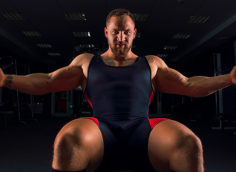 These five exercises will make you stronger, bigger, and more athletic... even if you're already pretty damn strong, big, and athletic.
Training
Lee Boyce January 7

We all fall into one of these two categories. Knowing your type will help keep you motivated. Check it out.
Tips, Training
Christian Thibaudeau November 18