Have you ever competed in a sport where you felt like every decision you made was perfect? Any long-time athlete who's done this would say he was "in the zone." But the zone is just another way of describing a flow state. So, what's a flow state?

"Flow is completely focused motivation," writes Mihaly Csikszentmihalyi. "It is a single-minded immersion and represents perhaps the ultimate experience in harnessing the emotions in the service of performing and learning. In flow, the emotions are not just contained and channeled, but positive, energized, and aligned with the task at hand."

Flow is everywhere in sports. For example, in the book, The Rise of Superman, Steve Kotler uses the evolution of extreme sport athletes to define how flow can magnify human performance. These athletes have consistently shattered their records by tapping into natural flow state triggers.

The 10 Characteristics of a Flow State

Does this sound at all familiar? It should. This is what training looks like when it's done right. It's why the gym is so binding to so many people's lives. Inside the gym, flow happens faster than in everyday life. It's what keeps people coming back and why the best in the world break through barriers faster than anyone else. 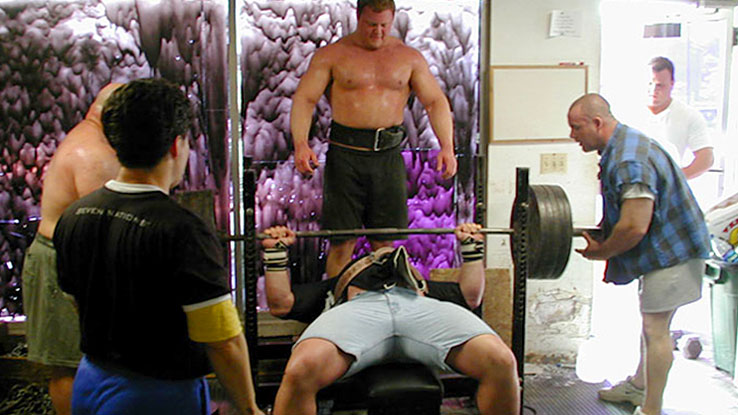 Why are social triggers important? Imagine being able to tap your maximum level of performance more often. What if you could enter an environment that literally pulls you to another level due to shared goals and challenges to your abilities? Where the social environment creates a pressure that multiplies your results?

This is the secret that you haven't been able to borrow from Westside Barbell in the past. Sure, you can use dynamic effort, you can use the conjugate method, and you can buy a reverse hyper, but you won't turn out champions like them because it's the flow triggers that really make the difference.

CrossFit Isn't a Cult. They Use Flow.

CrossFit has actually mainstreamed flow states. The social environment creates a group flow state that happens at the start of almost every session. How else can you explain how Olympic lifts and kettlebells went from fringe to something you see in shoe commercials? It's because the flow state becomes addictive, it challenges trainees to push themselves just to the cusp (and often times beyond it) to achieve better results.

CrossFit has used this to get members to flock to their gyms and to create a culture of fitness that is dedicated and insatiable for more. Creating this kind of thought process in yourself can generate increased intrinsic motivation and fast-track your progress. The challenge, of course, is making it happen.

The Most Successful Performance Gym in History

Athletes' Performance (now EXOS) is probably the most successful performance gym in history. Jadaveon Clowney trains there. They've helped the German National Soccer team for the last decade. They have more first-round draft picks in the NFL draft than any other gym. They also use flow states and self-determination theory in order to get their results.

They design every aspect of an athlete's life, from the food to the exercise selection to the feedback loop. Machines tell athletes their power output and heart rate in real time in order to keep them on the fine line of flow, and the almost sacred environment of past champions who have trained there creates a fear of being the person who couldn't cut it. Their programs and methods are somewhat unconventional, yet they're able to produce results far beyond those of other gyms. They do this because they don't dismiss flow states, but instead design their business around creating them.

How to Use Flow in Your Gym

The goal of training is to get better results in the fastest time possible. If flow states can help this, how do we take advantage of them? Here's how:

When trying to use the elements of a flow state to attack your goals, it's important to understand exactly what those goals are. Why would you train to run a sub 20 minute 5k when your goal is to bench 350?

Having clearly defined and measureable goals allows you to track progress and work towards a direction that you believe in. That is what's important. Having control of these goals is one of the most powerful motivators in training. No one else needs to, or has the right to, choose your goals. They need to come from within you so that when the obstacles appear – and they will – you're chomping at the bit to take them down.

Step 2: Train 1% Past Your Comfort Zone

Why is 5/3/1 successful? It's easy to comprehend and it causes you to create struggle that's just outside of what you're currently comfortable doing. There's near constant feedback. These are both important flow triggers.

Do a workout that's too far out of your depth and you'll only feel the struggle. Something too easy, and there isn't enough on the line to trigger flow. That was the beauty in the training max you establish in 5/3/1: it put you on the flow line and created built-in struggle that was never too far and never too close.

When choosing your training plan, try to think about creating a situation where you're reaching 1% past your comfort zone at all times. There should be some failure, but not much. Too much struggle forces you out of flow.

Step 3: Train in the Right Environment for You

Everyone's heard that they need to find a gym where they can really train, not just work out. Your environment has more to do with the ability to lock into a focused state than what equipment you have. If training at the park gets you focused, that's where your success lies. If it's your home gym, then don't feel some misguided sense of loss over not having an elite facility to work in.

Throughout history some of the greatest accomplishments have been achieved with limited resources. It's the ability to concentrate and attack your efforts with focus that truly matters. Find somewhere you can train with focus and intent and fall deeply into the process.

The 2014 Spurs looked so locked in that they crushed an otherwise dynastic group in the Miami Heat. How was it possible that this group of people were so incredibly together, a team of alleged destiny? Flow states are a likely culprit.

Being in a group with a likeminded goal (winning a championship) while struggling just a bit outside their abilities, with a ton of intrinsic motivation and complete absorption in the event itself, led to one of the greatest margins of victory in NBA finals history. This group moved and played as one and it brought nearly every player on the team to a new level of performance.

Do you have a workout partner or group that can be this for you? A great training group doesn't have to be one strong dude being chased down by others. It can be a group with the goal of getting better, of putting ego aside and being more than they are now; having each trainee coach and evaluate each other in real time, absorbed in the process and focused on the task.

You can achieve flow without being in a group, but a group can pull you in much faster and you can easily achieve success far beyond what you're currently doing.

The Future of Flow

As strength coaches and trainers begin to study the field of psychology and motivation more and more, the understanding of recreating what the best do naturally will unlock greater gains for every person. You can choose to ignore flow and the psychology of improvement, or you can embrace the idea that the secret to being better isn't in the next exercise or rep scheme you program, but in the way in which you go about your training.