What is it that set Dorian Yates apart from his competition? And what is it that can often help a powerlifter or Olympic lifter put pounds on his total? Answer: A super-strong set of spinal erectors that resemble two big boa constrictors running down the back! 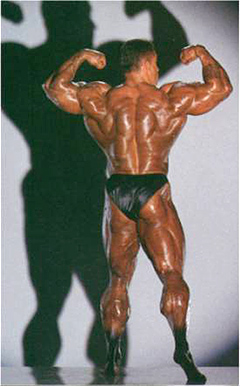 But what muscle groups are we really talking about here? What's their function? And just how do you develop a strong, well-developed and healthy back? You're about to find out!

The erector spinae muscles run the length of the back, from the sacrum all the way up to the base of the skull. When working unilaterally, the erectors laterally flex the spine and/or head. When working in unison, their role is to extend the head and spine.

The common origin of these muscles is a large tendon that attaches to the posterior sacrum, iliac crest, sacro-iliac ligaments, and the lumbo-sacral spinous processes. The erector spinae can be broken down into three different groups:

Each of these three groups can be sub-divided depending on which area of the spine they act upon: 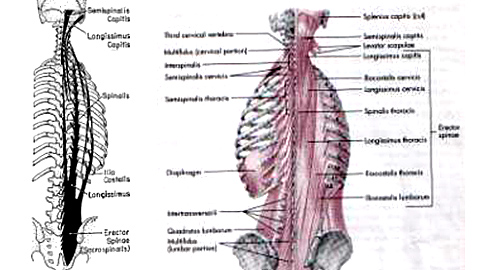 Okay, so now that we know what muscles we're really talking about here, what are some key exercises to help develop them?

Tools of the Trade

Back Extensions (Static and Dynamic)

Back extensions are one of the most basic, yet effective, exercises you can use to build your spinal erectors. I'm going to describe two different variations: a dynamic version and a static version. 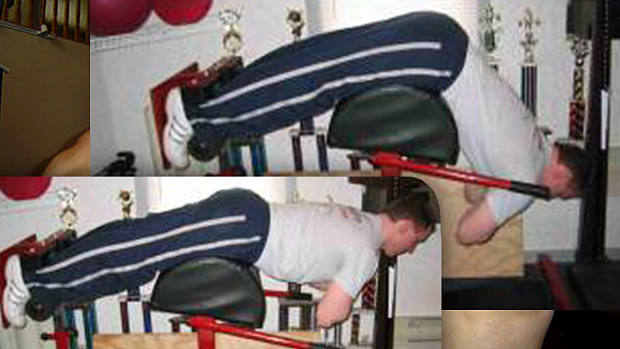 For the dynamic version, lie face down in a glute-ham or back extension machine with the tops of your hips just beyond the highest point on the pad. In the starting position, your torso should be folded over the pad with your back flat. From this position, think about squeezing your low back muscles starting at your sacrum and going all the way up to the top of your head.

Once everything is tight, extend up to a point parallel to the floor. Hold at the top for a second and then repeat as necessary. This exercise, when done properly, is a great developer of the erectors, but don't just climb in and start performing nasty reps! Remember, squeeze from your butt all the way up to your skull and you'll be doing it right. Once you start getting stronger, add some weight to really crank up the intensity.

For the static version, the set-up is identical. However, once you come up to the midpoint position (as shown on the right), you're going to hold for an extended period of time. Why? More and more research is indicating that many lower back injuries are due to poor muscular endurance around the spine, rather than poor muscular strength. This version builds endurance in both the erectors and the multifidi muscles of the back.

Good mornings are another good option for developing a super strong back. Beyond building strength in the erectors, the good morning will also help your strength and confidence in the squat. With good mornings and Romanian deadlifts (explained next), most people just load up the weight and then bang out reps. This is wrong! If you value your spine, you'll perform these exercises correctly. Remember, proper technique is key! 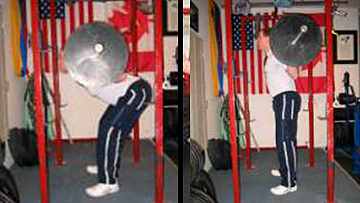 Rest the bar on your back as if you were squatting, and set-up with a shoulder width stance. The knees should be soft and the chest elevated. From here, push the butt back as far as possible. Once you think it's gone back far enough, keep pushing back! The key here is to maintain a neutral spine while getting as much horizontal movement at the hips as possible.

Lower to a point just above parallel to the ground (this point may be higher or lower depending on flexibility), and then squeeze the glutes and return to the starting position. Remember: Chest up, back flat and push that butt back!

The RDL is very similar to the good morning. Many powerlifters will say that the RDL is to the deadlift what the good morning is to the squat. Beyond building postural awareness and the ability to complete the big reps, the RDL builds old-school strength as well! 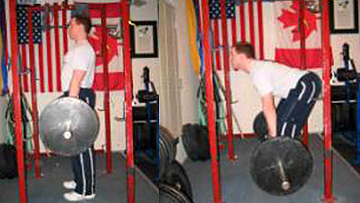 Grip the bar at approximately shoulder-width and set up with a shoulder-width stance. Again, the knees should be soft and the chest elevated. Execution is almost identical to the good morning: the chest should be up, the spine flat, and you should push your butt back as far as possible.

Don't let the bar get too far out in front of you! This will round your spine and leave you at serious risk for injury. Instead, let the bar slide down your legs to a point where you get a good stretch in the hammies. I tell many of my trainees not to worry about how far bent over their torsos are, but instead focus on keeping the chest up and pushing back to get that hamstring stretch. If you're getting the stretch and the chest is up, you're doing the exercise right.

From the bottom position, squeeze the glutes and bring the hips back up to the starting position.

The reverse hyper isn't only a great developer of the spinal erectors, but the entire posterior chain as well. The thing I really like about the reverse hyper is the fact that it seems to really develop the lower fibers of the erectors near the sacrum, and also provides a traction-like effect on the lower back as well. 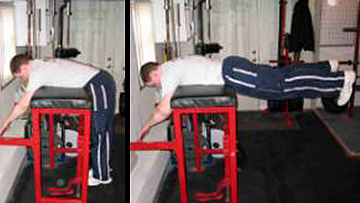 Proper technique can make a huge difference on reverse hypers; don't just mindlessly use momentum to swing the weights around. Lie on a reverse hyper machine with the straps around your ankles and the top of your hips just off the bench (straps not shown below). From the starting position, squeeze the glutes and, keeping the legs as straight as possible, bring the legs up to a point parallel to the ground.

To help enhance firing the glutes, it may help to pull the toes up or to lead with the heels from the start. Squeeze the glutes and lower back hard at the midpoint, and then lower under control to the starting position.

I've grouped these two exercises together because their performance is essentially the same. The primary differences will be where the bar starts (either on the floor or on the pins) and the amount of weight you can use. Several articles have been written here regarding proper deadlift form, so I'll direct you to Dave Tate's Dead Zone article, as well as my Precision Pulling article for a more thorough analysis. 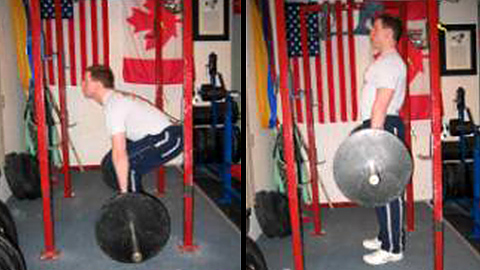 For a quick synopsis, there are three basic components to proper deadlifting:

Of course, deadlifting isn't really that simple, but just doing these three things will make a huge difference in the amount of weight you can use, as well as perfecting your technique. 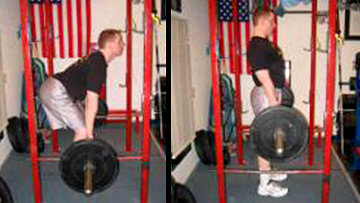 I've saved the best for last. The more I perform this exercise, the more I like it. First off, remember that the spinal erectors aren't just in your lower back, but actually run along the length of your spine. This exercise will definitely remind you of that; the first time I did these, my back was literally sore from my sacrum up to my skull! 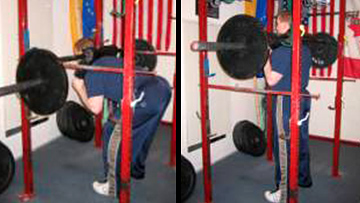 To begin, set-up the catches in a power rack so that they're slightly above waist or navel height. (Note: This exercise can also be performed with the bar in chains supported from the top of the rack.) Load up some weights and you're ready to rock.

Get under the bar and set up like you're in the bottom of a regular good morning; the only difference is you have to get super tight before you even think about moving the bar. Get your glutes, hamstrings and erectors tight, force your chest up, and then drive your heels through the floor. Force your chest up throughout until you get to the top... no rounding! You must really force your entire back to stay flat and work to keep your chest up. The camber of the bar will really murder your back from top-to-bottom, so good luck! Reps in the one to five range work best for this exercise.

Why are there no rounded back variations? Here's the deal: You can build a great set of spinal erectors using round back variations of these lifts. But, you probably can't do it and stay healthy for an extended period of time.

Now I'm sure some old-school lifters are going to bash me, saying that they've done rounded back lifts for years with no pain. That's great, pal, but you're probably the exception to the rule and others who follow your advice probably won't be so lucky.

Round back good mornings, stiff-leg deadlifts, pull-throughs, deadlifts and the like can and will develop your erectors to a high-degree, but I won't have it on my conscious to prescribe them for you. Stuart McGill, the world's foremost researcher of spinal biomechanics, discusses in length in both of his books about how bad loaded spinal flexion is on your spine. To make a long story short, if you value your spine in its current state, stick to the neutral spine versions I've described above to get yourself stronger while staying injury-free.

Whether your goal is to build an amazing physique, a record deadlift, or simply put slabs of muscle on your lower back, try out a few of these exercises and build a set of erectors you can be proud of!

Think of this as a whole-body pushing exercise. It'll even nail your core. Here's how to do it right.
Exercise Coaching, Push-Up, Tips
Nick Tumminello December 11

This exercise might be too tough for you, but even just a few reps will fire up your upper back and lats. Take a look.
Tips, Training
Ben Bruno September 12

Only newbies can bring up every lift at the same time. Once you get stronger, you'll have to get smarter. Here's how.
Powerlifting & Strength, Tips, Training
Paul Carter November 13