Editor's Note: The author of the following article is a cop, a twenty year vet in an urban city's police department. Besides busting bad guys, he's also competed in bodybuilding at the national and international levels. But because of his profession and his no-holds-barred commentary, he's asked us not to use his real name. If you missed Part I of this article series, you can find it here.

It's been a busy Saturday night. The drunk tank's full of weekend warriors we've been collecting from outside the nightclubs. Thank God for booze. I'd be out of a job if it weren't for these brawling inebriates. It ain't glamorous like NYPD Blue or CSI, but it has its moments.

There's a lull in the action and I'm back to my favorite empty parking lot typing on the wagon laptop. 0100 hours. Only three hours left to the end of shift. Perhaps just enough time to finish another article...

As I mentioned in Part I, being big and strong is an asset in police work. Of course, the terms big and strong are relative. If you're 5'2" and 130 pounds, then big and strong might mean getting to 180. If you're 6'6" and 300 pounds you may never lift a weight in your life and still be bigger and stronger than 99.9% of the population.

So when we talk about getting big and strong it's a relative term meaning bigger and stronger than you are right now. And if you follow the eating and training programs I'm about to outline, there's no doubt in my mind that you'll get significantly larger and more powerful than you currently are.

I'm no monster at 5'9" and 200 pounds but I've built enough size and strength over the years so that it's a rare day when I come up against someone in my job that presents a real physical threat. Genetically I'd say I'm about average in the size and strength potential department. Through several years of hard, smart training I was able to develop my physique to the point where I won provincial titles and placed in national and international bodybuilding competitions.

Of course, there were some 'roids along the way, but what's interesting is that I held on to much of the gains I made after going off the juice. It's been many years since I was on the gear, but through heavy, consistent training I've maintained a respectable amount of size and power. I believe that heavy, basic, old school training is the key to quality muscle–muscle that's there for years to come, not the pumped up mass built by high reps and light weight.

I remember several guys over the years who cranked and blew up, only to shrink back to their pre-roid state after a few months of being off. Without exception, these guys didn't put in hours of hardcore training including squats, deadlifts and all the other basic compound exercises.

Also, the guys from the old training days who juiced and trained heavy are still sporting big, thick legs and backs twenty years hence, even if they haven't trained or taken a steroid in the interim. If they haven't watched their food intake they may have a belly developing, but to the trained eye it's obvious they spent some quality time in the squat cage at some point during their misspent youth.

Let's start with one of the first old school programs I learned from some of the huge powerlifters and bodybuilders I trained with in the late 70's. This routine and the dietary guidelines I'll present below packed on a ton of muscle and some fat. Because this program lasts only four weeks, you don't have to panic if you're forced to let the belt out a notch or two. The next cycle will address consolidation of the gains you've made and should bring the belt in a notch while maintaining most of the size and power you worked so hard to gain.

This cycle can be used by a newbie who's trained for at least six months and learned the proper form for most exercises, or an advanced trainer who wants to put on a few pounds and increase his strength. It's been a couple of decades since I first used this program but I still go back to it when I feel it's time to gain a little strength and size. I've tried every routine under the sun over the years and have yet to experience the gains I made on this one.

The key to this program is consistent, progressive resistance over four weeks. You'll be focusing on the major compound movements, doing five sets of five (5x5) each workout plus warm-ups. Start off the cycle with five pounds less than what your max would be for five sets of five. Easy enough?

Here's the catch. The program hinges on one very important factor: you must add five pounds to each of the compound lifts each week! It's do or die.

I'd highly recommend a week's hiatus from lifting and any other strenuous activity before embarking on this particular odyssey. You should be completely healed from any recent injuries. Pick from the list of compound exercises only those that won't aggravate nagging problems you might have with elbows, knees or lower back. If you don't heed this warning you could get injured.

Along with being physically rested and prepared, you must be psychologically prepared. For the four weeks you engage in this program you'll be obsessing about the upcoming lifts. If you've started your lifts with a weight which is truly close to your maximum, the third and fourth weeks will see you accomplishing things you may not have believed possible. If the last two weeks aren't that difficult, you haven't started heavy enough.

Think about it: adding fifteen pounds to all your compound lifts in just four weeks. The less training time you have in, the less impressive this will be. For those of you who've been at this game for several years and find it difficult to add an extra five pounds of bodyweight or a significant amount to your lifts, give this program a try and I guarantee you won't be disappointed.

It's best to do this program with a highly competitive partner. It doesn't matter how close you are with respect to strength levels since the competition is about who can add the five pounds each workout. Liberal doses of derogatory remarks and harassment are key here. When one partner fails to accomplish the scheduled five pound increment, it's imperative that his state of mind should border on clinical depression. It's your responsibility to reinforce the negative self-image of your partner should he fail, just as it's his responsibility to belittle you should you fail.

Random phone calls at all hours of the day and night questioning the true gender status of the pussy who couldn't make that tiny, miniscule five pound jump are acceptable and encouraged. Mailing Richard Simmons exercise videos to the offender are also helpful.

You think I'm kidding, don't you? The lengths we went to, back in the day, to ensure our partner made his next lift would boggle the mind. Yes, we were crazy. But guess what? It worked. If you missed a lift you'd come back three hours later or the next day and force out those reps. If not, the next week required a ten pound increment to stay on schedule. It got to the point where I'd have nightmares about missing my lift. That was in between the wet dreams starring the uber-fat chicks on the Richard Simmons video I'd recently received in the mail. Again, you think I'm joking?

The point is, if you miss a rep or two, don't sweat it. Just beat the shit out of yourself. Hopefully your partner will assist you. If you're not prepared to get those reps, no matter what, then don't put yourself through this program. Positive reinforcement is all the rage these days. Take a risk and see what some old-fashioned negative reinforcement can do for you (ya big pussy.)

1) Pick one movement from the compound exercise list. (I'll provide this later in the article.) Perform 2-3 warm-ups followed by 5x5 we talked about above.

Tempo: Whatever allows you to get the five reps.

Rest between sets: Whatever allows you to get the five reps. All that matters is that you add five pounds each week to this exercise.

Note on warm-ups: Make sure you don't tax yourself on these; you'll need every ounce of energy for the working sets. Do no more than five reps on each warm-up.

1) Chest compound movement from list below: 2-3 warm-up sets, then 5x5 balls to the wall.

2) Flyes (incline or flat): 2x10-12. Use a weight that would allow you a max of 15 reps. Don't worry about taxing yourself on these once the compound exercise is done.

3) Back compound exercise from list: 2-3 warm-ups, then 5x5 until your eyeballs pop out.

3) Biceps movement from list: 2 warm-ups then 2x5. Note that you're using less volume for arms. Increase five pounds every two weeks rather than every week or your arms will become too taxed and interfere with other upper body lifts.

As for days of the week for each workout, that's a personal choice based on schedules. Make sure you don't do any of the workouts more frequently than once per week. Mon/Wed/Fri or Tues/Thurs/Sat are ideal splits. If this isn't possible just make sure you have at least one day rest prior to the leg workout. Two or three days is better.

No other exercise is to be done for the four weeks on this schedule. Every second of recovery is essential to guaranteeing you'll make that five pound increment.

Here's your list of exercises you'll choose from for the tough part of your workouts. Remember, you'll pick one for each body part and stick with that exercise through the entire cycle.

Back: Barbell rows, pull-ups (Use additional weight if you can do more than 5x5 bodyweight. If you use weight, add one rep each workout instead of 5 pounds.)

A Word on Nutrition

Anything not nailed down is fair game. Protein shakes and MRP's are all good. A creatine cycle may be helpful. A trick we used was to drink as many blended bananas and glasses of milk in a day as possible on top of our usual eggs and slabs of meat. It's a personal choice as to what you want to consume but you'll be hard pressed to make the gains required on this program without a shitload of calories, carbs and protein.

For those of you who are terrified that your abs may become blurred on this program, fear not. It's impossible to turn into a tub o' goo in four weeks while still maintaining a lifting regimen. I'll be honest, you may not be as sharp as when you started, but the gains you'll see should more than compensate for any extra baggage.

On the next cycle we'll discuss some old school nutrition designed to shed a little fat, but it's not time to apply those principles just yet.

The radio's squawking again. Time to close the laptop and head to the next drunken brawl and collect some more clients. See you in Part III! 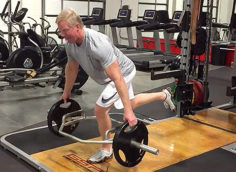 Single-leg trap bar exercises in the style of the Reeves deadlift (hands on plates, not bar) provides the perfect stimulus for crushing every muscle in the body.
Deadlift, Exercise Coaching, Tips
Joel Seedman, PhD July 30