Good form is a serious topic, so serious that lifters often become narrow-minded about it and limit their growth. No wonder members of the "form police" aren't often splitting the sleeves of their uniforms. But ask any big bodybuilder about the specific and strategic exercises he uses and you'll find out that the biggest are often rule breakers, using incomplete ranges of motion and questionable tempos.

If you've been doing this weight training thing for a while and you're experienced in the game, then pay close attention. If you haven't, move on. The truth is, advanced lifters are already aware of the fact that there's no single "blanket cue" for any given exercise – it all depends on the lifter's body and anthropometry. Think about the correct stance for squatting. (In a nutshell, there isn't one). Similarly, advanced lifters who are going after size and muscular development would benefit from thinking outside the box and taking a page out of the bodybuilders' books. What may be called "cheating" in the world of the pocket-protectin' technique sticklers can be a much needed hack to get the direct isolation you need to grow.

As a disclaimer, I'm not saying to substitute your actual back workouts with those in which you practice bad form. And for God's sake, if you're having difficulties getting your back to work properly on a regular day, then you're probably not advanced enough to derive value from these methods.

We've all heard that the shoulders need to be retracted first in order to engage the back during pulling exercises. That's a common and needed cue – for back training. Failure to draw the shoulders back means most of the weight will be lifted by the arms and the back won't be sufficiently trained. Well, guess what? Your back is sufficiently trained, so why not take advantage of that very same load forfeit by throwing in some arm-dominant pulls to hit the biceps from varying angles?

Chin ups: Don't set your shoulders before pulling yourself over the bar. Just pull with your arms! What you give up in lat activation has to be compensated for by biceps work. Plus, pulling from overhead will stimulate the brachialis muscle to assist you in making the "peak" more prominent.

Seated Rows: Using the same tactic with rows will make the forearm muscles like the brachioradialis get stimulated from the neutral grip we use with the V-grip attachment. Pulling higher up on the torso also creates a tighter angle at the elbow, meaning more arm involvement.

As an experienced lifter who's done it all, the numerous variations of dumbbell and barbell curls won't always do the trick. Take your back out of the picture and add these moves into your arm day and you'll be busting out seams.

"Bad" Deadlifts for Low Back Size

Ah, the deadlift. One wrong move and you could be sipping your meals out of a straw for the rest of your days. Okay, probably not, but good technique is always emphasized, and good technique requires that the correct muscles have control over the pelvis at the correct time.

In his book, Starting Strength, Mark Rippetoe acknowledges the importance of training the deadlift pattern in a position of weakness in order to succeed/survive in real-world situations where you may not have enough time to think about using proper form with a pull from the floor. Rip was making reference to "round back" deadlifts, and they can be useful in strengthening or developing the spinal erectors and quadratus lumborum.

Making sure the glutes don't fire can make deadlifts a great way to train the low back exclusively, without the constraints and load ceiling that a back hyperextension machine may create. The video below is one I posted earlier this year as an example of a poor deadlift pattern. Note that my pelvis doesn't posteriorly tilt in order to engage the glutes and hamstrings, rather my low back remains arched and does all the work.

I'd never recommend this for a guy who's just starting out, but for an advanced guy who knows the difference and is simply looking to maximize the size of the speed bumps on his lower back, it could be very useful, especially when stopping a few degrees short of the finishing position so the load doesn't compress the spine as much.

We're all familiar with the blanket squat cues. Not letting your knees pass forward over the toes is a common one, along with width recommendations and most importantly, "pushing through the heels."

Sissy squats are an effective yet controversial exercise because they involve no hip drive, no heel contact, and direct isolation for the quads. Why can't the same idea be applied to front or back squats? If you've got squats down pat and are looking for bigger quads, take advantage of the leverages (or disadvantages) you can use to maximize their stimulus. As long as your knees are healthy, throw on some heel lifts, narrow your stance, stay vertical with the torso, let the knees come forward, and do not emphasize a major heel or hip drive. Hell, you don't even have to fully lock out so you can increase time under tension – the quads respond well to that.

The same general "non"-principles apply to exercises like the leg press and hack squat, and if you don't want to take my word for it, think back to the days of Vince Gironda with his "frog squats." For added measure, here's a video of John Meadows himself getting trained by Tom Platz on a tough extended set of hack squats.

As you can see, the heels are routinely coming off the platform, the duck stance is in full effect, and extension is short. The feet are also positioned towards the back of the platform so the knees can track far forward. And John Meadows is huge. Enough said.

This sounds simple enough. The first thing to think about is whether your body has pre-existing conditions that would bar you from staying healthy while performing any movement. If that's good to go, then the next thing to look at would be how much of a "veteran" lifter you are. If you know how to move properly, then a few workouts with severely altered technique won't mess up your muscle memory and untrain the good patterns that everyone should know. Plus you'll have enough training knowledge to be sensible about things. Once you've reached a certain point, it's still just as important as ever to train the basics, but for breaking through size plateaus, sometimes a few tweaks can do just the trick. Just ask the big dogs. 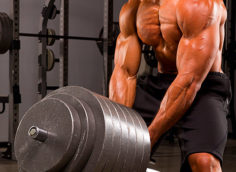 Don't have time to train 6 days a week for over an hour? Don't worry, you don't have to. Get in, get out, make gains. Here's how.
Powerlifting & Strength, Training
Dan Chavez March 29

Ramp up this powerlifting accessory exercise with a band to add resistance at the waist and cue yourself to get the hips through. Great for glutes.
Exercise Coaching, Glutes, Powerlifting & Strength, Tips
Paul Carter March 9 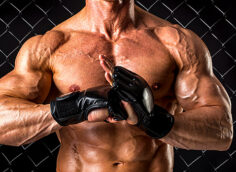 Get the power to strike hard, or at least build the body to look like you could. Here are the five lifts you need.
Eirik Sandvik July 19 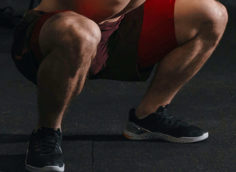