The Best Way for Women to Lose Fat

It's nuts. Whether it's because of a New Year's resolution, the approach of flesh-baring summer, or even some upcoming milestone event they want to "look good for," women everywhere are drawn to the folly of aerobic activity.

If only that were the worst of it. They usually combine it with some sort of severe calorie restriction that would, in comparison, make the participants of the Bataan Death March seem like a bunch of gourmands participating in a progressive dinner.

They get smaller, all right, the same way a fresh corpse gets smaller if you leave it next to the radiator for a few weeks. That's a colorful and, yeah, harsh way of saying that they lose as much/more muscle as fat, and they kind of, well, shrivel. They may fit into a size two dress, but they look like the Corpse Bride – great cheekbones, but that's about it.

Those of us who study exercise and diet for a living know better, but our advice usually falls on stubborn ears. So in the hopes of converting at least a few of these intransigent souls, I went looking for the best-designed study I could find on the topic of women, weight training, and weight loss.

I tracked down what I was looking for in a 2017 study published in the International Journal of Sports Nutrition, Exercise, and Metabolism. It found that women in their 30's who combined weightlifting with mild calorie restriction lost 2 pounds of fat for every pound of muscle they gained and fared much better, body composition-wise, than those who just dieted.

The scientists recruited 40 healthy but overweight females (over 30% body fat), average age 32, and separated them into four groups for a four-month study:

A registered dietitian calculated each woman's resting metabolic rate (RMR). All participants also had their body fat measured. That info was used to calculate their daily macronutrient and calorie goals. The women in the diet groups received 500 fewer calories per day than their bodies needed to maintain body weight.

All diet plans, regardless of whether they were calorie restriction diets or calorie maintenance diets, consisted of 3.1 grams of protein per kilogram of fat-free mass, 20% of calories from fat, and the remainder from carbohydrate.

Those in the resistance training groups were required to work out 2 to 3 times a week under the supervision of a personal trainer. The program was designed to work virtually every major muscle group in the body and contained such mainstays as squats, deadlifts, and bench press.

As I said, this was a well-designed study.

Thirty-one women completed the study. All groups (minus the control) lost body fat, with the RT only group having the slowest or least fat loss. The RT group, of course, gained the most muscle (2.2 kilograms), but the RT+Diet group ended up gaining one pound of muscle for every 2 pounds of fat they lost.

(Special thanks to the people at Suppversity for cutting through the statistical jungle and coming up with that calculation.)

Perhaps surprisingly, the subjects in the diet-only group didn't lose any significant amount of muscle, while a lot of similar studies show the opposite. However, the subjects in this study were being fed a lot more protein (3.1 grams per kilogram of fat-free mass) than most other studies, so it makes sense and helps verify what we in the weightlifting and bodybuilding community have long accepted as gospel – that adequate protein protects muscle in the face of dieting.

To further punctuate the point that dieting doesn't have to lead to a loss of a lot of muscle, the authors pointed out, "There is a clear metabolic cost of maintaining lean muscle mass, the actual energy expenditure associated with skeletal muscle is rather low, estimated at only about 13 kcal/kg per day."

Another useful tidbit that came out from this study: The subjects in the Diet-Only group didn't suffer any "metabolic damage." In other words, their RMR didn't slow down from four months of dieting. Of course, their daily caloric deficit was only 500 calories, so that probably wasn't going to happen, anyhow. Still, it's an important result to add to the canon of diet wisdom.

If any wanna-be Corpse Brides are reading this, or if it's been read by someone who loves them, the message of this study is that combining a sensible and effective weight resistance training program with modest calorie-restriction is unequivocally the best way to change body comp for the better.

No other strategy could conceivably lead to anywhere near as dramatic a change as adding one pound of muscle for every 2 pounds of fat lost. That's the stuff of alchemy, only instead of turning lead into gold, you're turning weight training and a few passed-up snacks into a superhero body.

Say no to the treadmill, the Peloton bike, or jogging, in combination with, or separate from, calorie restriction. 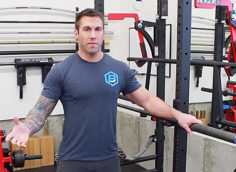 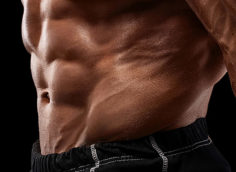 A step by step guide to performing the most bad-ass upper back exercise in existence.
Back, Powerlifting & Strength, Training
Matt Kroc May 14

Perform this exercise before squats, especially if you've been sitting a lot. Your squats will feel great! Check it out.
Tips, Training
Dr John Rusin June 24