Who Do We Believe?

As usual, I disagree with both parties.

In my continued pursuit of unpopularity I'm going to disagree with both the functional guys and the strength crowd. I know the Testosterone reader is saying, "But you're a functional guy." Not true. Actually, I'm a results guy. I'm a best practices guy.

Yes, my first book was called Functional Training for Sports, but I think some of the proponents of functional training have gone too far and I'm not the only one who thinks that way. I got an email recently from Matt Nichol, strength and conditioning coach for the Toronto Maple Leafs. Matt said, "I feel like I have to apologize these days for actually trying to get my guys strong."

The important thing is I'm not going to forget or dispose of what I know about training. I still think that one-leg exercises are more functional then two leg exercises because we move on one leg at a time in real life. I still think dumbbells are more functional than a bar because of the unilateral nature of dumbbells. We are unilateral machines.

With that said, I still believe in lifting weights. I want my athletes to be strong, and to be strong you have to lift heavy stuff. Reaching with, and or waving a five-pound dumbbell in three planes of motion isn't training. It might be warm-up, but it's not training in my book.

However, this article isn't about the function debate but rather about training the anterior core, otherwise known as the abs. I think there's a compromise between the functional guys and the strength guys. The key to getting the strength crowd to listen might be getting them to read the following, which came from one of their own:

Guess what? I agree with Dan.

However, we have a small problem, we need progression. Ab wheel rollouts are tough. Too tough. That's the reason I abandoned them years ago. Many of my athletes got exceptionally sore or were unable to hold a stable lumbar spine. In fact, I actually told my athletes who had any abdominal issues (previous strains, etc.) never do them under any circumstances.

How does all this tie into the first paragraph about functional training? Well, it turns out that this is why I half-agree. The function of the anterior core is absolutely not flexion. That is where I 100% agree with the functional guys.

When does anyone ever do anything in real life that looks like a crunch? I agree with the functional folks that lying on your back doing abs is not only a waste of time but probably dangerous. Check out Stuart McGill's work. Not a lot of flexion. Look at McGill's method for causing disk damage in a lab setting: repeated flexion.

So the key in my mind was to find a progression to get my athletes to safely do Ab Wheel Rollouts. Here it is:

If your athletes or clients can't hold a perfect plank for 40 seconds (not very long, I know), start there. Remember, a perfect plank looks just like what the person would look like if he were standing; it's not a prone crunch.

I know, an infomercial piece of equipment in a T-Nation article! I'm sure a few of the meatheads will call me all kinds of names on the forums. (Note to meatheads. Sticks and stones... ). Ab Dollies are a bit pricy but make a nice transition to the wheel, and I'm all about progressions that keep my athletes healthy.

In fact, while at Boston University, I purchased 8 Ab Dollys. The Ab Dolly makes the transition from the stability ball to the wheel much easier. It's a physics thing. The Ab Dolly allows the user to rest on the elbows to get a short lever rollout.

If you bought an Ab Dolly, you really don't need a wheel. Simply grasp the sides of the Ab Dolly with your hands to lengthen the lever. I like the wheel better, though, as you get better diagonals when you get more advanced, but for Phase 3 it really doesn't matter. The key is that the moving piece is now a full arms length away.

The Valslide or Slideboard adds a frictional component. In the case of the Valslide, you simply rest your elbows in the two discs and initiate the rollout movement. Instead of the wheel rolling back easily to the starting position, your bodyweight creates drag. This again makes the exercise harder, particularly the concentric or return portion. You actually have to pull yourself back in.

I almost left these out but they actually work as a progressive resistance exercise. Start with an empty bar and add 10 lbs. a week. The bar rollouts don't change the eccentric nature of the exercise, but boy can they change the concentric! 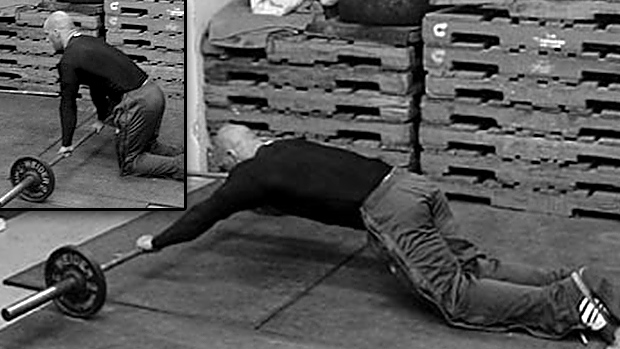 The bottom line is that Dan John is right and all the, "Just do heavy squats and deadlifts" guys are wrong. If you never intend to run a sprint or throw a ball, your core musculature may be fine without direct ab work.

However, there's no denying the role of the abdominal musculature in pelvic control when the body is in motion. The abdominal musculature or core muscles must act to prevent the spine from going into extension. In order to do this, a specific stress must be applied. The anterior core progression gets the body to use the muscles the right way and does it in a way that can keep anyone healthy. 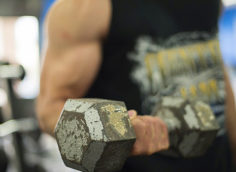 Trying to fit more work into less time has its advantages. But a mash-up of exercises will limit your gains. Here's what to do instead.
Tips, Training
Tim Henriques July 15