Experts say the Olympic lifts are awesome. Most trainees would certainly agree, thanks in part to the scores of articles written about the effectiveness of Olympic lifts at increasing explosiveness. However, not many lifters are using them for the primary purpose of improving their physiques. This is a mistake, and as you'll see, costing them some serious growth potential.

Here are nine reasons why even the most pecs and abs-focused lifter should incorporate the Olympic lifts.

As a college strength and conditioning coach, I always told our football players, "If you want to protect your neck, get rid of it." Our preferred method of "neck elimination" was the clean pull.

When I started coaching in the private sector, I was amazed to see guys blasting away at their traps with very heavy shrugs, often four or five plates per side, yet with no increase in trap size.

If you want the traps of a Big Ten linebacker, you need to train like one. Put the shrugs away for the next eight weeks, add in some clean pulls, and watch your neck vanish before your eyes. Be sure to emphasize the top portion of the lift.

The key to this method of trap development is the movement speed and rate of force development in the clean pull. The speed causes an insane amount of muscle activation and type II fiber growth, leading to traps so big they restrict hearing.

Most guys think the first thing a woman notices about a man is his pecs or bulging biceps. Wrong, my friends. The first muscle a woman notices is a man's left forearm – because she just checked out your ring finger. Now that you're in the clear (or maybe not, you slimeball), you better be showing off a Popeye-inspired forearm.

To get massive forearms, park the wrist curls next to the soy milk and cable crunches. Snatches or cleans will add serious real estate to your lower arms while developing the kind of grip strength that would get the thumbs-up from Thor himself.

Performing the Olympic lifts – without straps – will have your mitts working overtime, and your forearms will flourish as you learn to pull from the floor and then transition your body under the bar. Expect to see a set of meat hooks hanging out of your sweatshirt in no time.

What red-blooded American male doesn't want more muscle? We know that to achieve maximum size, the type II muscle fibers must be trained. However, traditional bodybuilding programming often fails to sufficiently stimulate this important fiber type. Sure, some bodybuilders hit the type II fibers by working on maximum strength, but what about maximum speed?

4. The Squat is the Basis for the Clean

A couple years ago, I was having a conversation with a physique-minded co-worker about obtaining the elusive teardrop. Sure, thousands of leg extensions will eventually get you there (maybe), but why not develop the quad thicker and quicker?

Some of the best legs on the planet belong to some very successful weightlifters, and one of the best teardrops you'll ever see is on Pyrros Dimas, holder of numerous world records in the clean and jerk. What he didn't do was a single, solitary leg extension, but he did do tons of cleans and front squats.

In case you're not aware, the front squat is the foundation of a good clean. So if you could clean 140+kilos, what do you think your quads would look like?

Put the leg extensions on hold for a while and try full cleans for 5 sets of 4. Then tell me what puts on more muscle!

Any successful person, whether they're running a Fortune 500 company or competing at the Olympics, will tell you that the key is balance.

A physique athlete needs balance too, or symmetry. While a freak show set of biceps or quads is cool, bodybuilding judges will tell you it's not ideal to look like a compilation of body parts.

Full-body movements such as the snatch provide the body an opportunity to act as the unit it's intended to be. If you can't hold a bar overhead in the full squat position, you'll quickly learn where you're strong, where you're weak, where you're tight, and where you need to improve. There's a reason coaches like Mike Robertson use the overhead squat as an assessment tool – it provides a whole-body view of symmetry.

6. Initial Pull is all Gluteus and Hamstrings

This list wouldn't be complete without mention of the posterior chain, the powerful musculature along your backside that can make or break bodybuilding success.

Misguided bodybuilders often toil away at various leg curl machines in hopes this will be enough to build massive glutes and hamstrings. Not a chance.

The snatch and power clean are near perfect posterior chain developers. They're explosive lifts that can be loaded significantly and they start with all that weight on the floor – meaning you're going to need massive glutes and hamstrings just to get the bar moving. 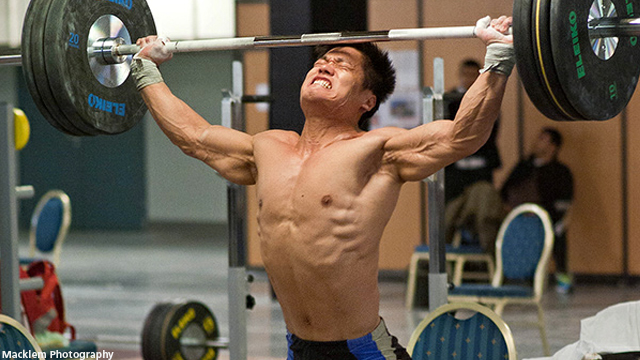 Plenty of research has been done demonstrating the negative effects of spinal flexion, i.e., doing crunches. With crunches out of the physique game, you're going to need a complete exercise to fully develop your "core." And if you want thick, slick abs, look no further than the snatch.

Any version of the snatch is going to develop superior abdominals. The reason is, the further you move an object away from your center of mass, the more strain it puts on the midsection to stabilize the object.

In the case of the snatch, a heavy load is as far away from your body as it can get. This challenges the obliques, rectus abdominis, and the rest of the core to get stronger. More strength equals more muscle!

At IFAST, we see a ton of jacked-up people. Every day, someone walks through the door exhibiting a severe imbalance (not just mentally, but physically as well).

For physique athlete just starting out with the lifts and moving minimal weight, you'll soon start obtaining some serious mobility. This is going to help you stay healthier longer while increasing the amount of muscle you can activate. More activation means more muscle!

I saved the best for last. Nothing says, "I'm about to dominate, life, business, and the gym" like a set of lats that makes your shirt look like a cape. Olympic lifters are known for having huge backs.

In order to properly perform the snatch or the clean and jerk, you have to keep the bar tight to your body. On every lift you're essentially using the lats to actively pull the bar back in.

If you're performing the snatch, this is going to build a ton of strength and size in your upper back. If you're doing cleans, your lats will get lit up. Start performing the O-Lifts and don't be surprised if Lois Lane wants to pin you up in a phone booth.

As a physique athlete you don't have to stop your current program to delve into an Olympic weightlifting program. Incorporating the lifts, or even part of the lifts, to bring up a weakness is what it's all about. Pick one area where the lifts can help you get better, implement it properly, and enjoy the success!

Think fat loss requires high-rep training and tons of cardio? Think again. You can torch fat in sets of three.
Fat Loss Training, Metabolic Conditioning, Training
Chad Waterbury October 24
When many of us think of perfect physiques, we think of those belonging to Golden Age bodybuilders. These champions of the past were muscular, strong, healthy, and athletic. It's cliche but it's true: women wanted them; men wanted to be them.
Training
Chris Shugart March 28

One of the most innovative and effective training programs we’ve published. Chances are, you’ve never trained like this.
Bodybuilding, Training
Charles Staley February 14