Few lifters enjoy performing conditioning or cardio. Can you blame them? Weight training builds size and strength and makes you feel invincible. Cardio on the other hand – especially slow-go, hamster cardio – feasts on lean tissue, jacks up cortisol, and leaves you looking and feeling like a depleted, shuffling, treadmill zombie.

It doesn't have to be this way. By following just seven simple rules, you can transform your soul-sucking cardio bouts into fat-stripping conditioning sessions that crank up your T levels and actually build serious muscle.

Brisk walking is a fine stress reliever and can help with recovery. Just don't expect it to have any effect on body composition or physical capacities unless you're so out of shape that walking takes you out of your comfort zone.

If you're comfortable during a conditioning session – even if it looks challenging on paper – you won't get much out of it. You must force your body to adapt if you want to change quickly. That's why the best way to get leaner and in better condition is to do higher intensity work like sprints, hill sprints, barbell complexes, Prowler pushing, farmer's walks, and intervals.

I don't like to go by how bad a weight training session feels to judge its efficacy, but when it comes to conditioning work, it really is true.

The human body is built for speed and power. Yes, we have the capacity to sustain work for longer periods of time, but dropping the speed/power aspect out of the equation is a mistake as we risk losing that lean and muscular look we all want.

That's why conditioning work that includes loaded and explosive work as part of an endurance session is the ideal method to improve the way you look. Farmer's walks, yoke carries, barbell complexes, box jumps, medicine ball throws, Prowler pushing, wheelbarrow walking, tire flipping, sledgehammer striking, kettlebell swings, and overhead lunges are all loaded exercises that can be used as part of a conditioning session to not only lose fat and build endurance, but also develop a more muscular body.

The bigger the engine, the more fuel it burns. So if body composition is your main goal, involving more muscles (bigger engine) during your conditioning session will result in more fuel (fat) being burnt. Furthermore, involving more muscles increases the demand on the cardiovascular system, which obviously has a greater affect on improving your conditioning level and work capacity.

I know from experience that doing speed and power work when the body is metabolically fatigued (but neurally fresh) causes a profound change in body composition, and the effect is seen very quickly. Whether it's due to survival mechanisms or specific hormonal responses, I'm not sure. Regardless, it works!

Here are some examples of what I'm talking about:

It could be a variation of the Olympic lifts or regular lifts like squats or bench press – done immediately after you've created some metabolic fatigue with an exercise like battle ropes, Prowler pushing, hill sprints, or loaded carries. For instance, you might push the Prowler 40 yards, sprint back, and then do 5 power snatches.

Doing a ballistic movement like jumps or medicine ball throws right after having fatigued the muscles involved through higher rep/pump work for the involved muscles. For instance, doing 5 box jumps after a set of high-rep squats.

Including explosive work as part of a metabolically-oriented circuit. For instance, 1000m on the rowing machine, 30 burpees, 20 kettlebell swings, 10 box jumps, and 5 power cleans.

Westside-like speed work once the involved muscles are pumped. For instance, doing pump work for the chest (pec deck, 4 sets of 10 reps with a 3-second squeeze at the peak contraction) followed up by 6 sets of 3 reps of bench press done as explosively as possible with 50% of 1RM and then 1 set of as many reps as you can with 85% of 1RM.

Ending a hard lifting workout with explosive work. For example a football player might do his regular lower body workout which would involve heavy power cleans, squats, and Romanian deadlifts and then finish up the workout with lighter, but super explosive, power cleans for 5 sets of 3 reps with 30 seconds of rest between sets.

Every time I've had to finish a workout within a certain time I've felt more focused, which led to better workouts. I also enjoyed fewer psychological inhibitions (e.g., being intimidated by a weight) and that allowed me to perform at a much higher level.

That's why I love things like Every Minute on the Minute Sets (doing one set every time the clock hits 1 minute), trying to complete a specific conditioning session as fast as possible, or doing as much work as possible within a determined time.

It puts you in a different mindset, one that's much more conducive to quality workouts. This is especially true for energy system/conditioning sessions. It seems to take your mind off the pain and physical discomfort and allows you to power through, ultimately leading to much better gains.

Strength is a skill. When I want to maximize my performance on a lift, I need to be able to concentrate on the task at hand and not be distracted. Music can hurt my performance as I'm not one to bang heads listening to death metal before a bench press set.

When it comes to conditioning work, however, I actually like loud music that has great rhythm as it helps me focus on maintaining a fast pace. The fact is, my performance during conditioning sessions drops by about 25% if I'm not listening to music!

For example, I like doing things like 3-4 rounds of 200-meter farmer's walk followed by 600 meters of jogging.

Let's get real. Some gifted athletes can build a muscular, lean, powerful physique without performing a lick of cardio or even conditioning work. For ordinary humans – or those who want the best results possible – a little hard, intelligent conditioning can go a long way towards building a rock-hard, formidable body that's built for bad. Just follow the seven rules above.

This stretch helps with just about everything. It even helps you activate and train your glutes more effectively.
Mobility, Tips, Training
Eirik Sandvik May 3

Here's how to keep training your upper body when a low-body injury has you sidelined.
It Hurts Fix It, Shoulders, Tips, Training
Jesse Irizarry July 27 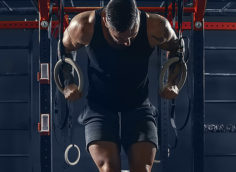 Your garage needs a set of rings. Here's why.
Training
Lee Boyce February 9

The idea of muscle confusion is largely misunderstood. You really don't need to keep the body guessing. Here's why, plus a better way to get strong.
Powerlifting & Strength, Training
Tony Gentilcore October 29