Wisdom From The Golden Era

At the height of Arnold’s bodybuilding career, we didn’t really know much about the science of muscle hypertrophy. That’s why a lot of old-school bodybuilding wisdom was anecdotal at best.

We now have a lot more research at our disposal, and while many Golden Era bodybuilding tactics are called “broscience” many others have since been validated.

Arnold was a big proponent of training to achieve a pump.

What is it? A phenomenon whereby muscles become engorged with blood following resistance training. It’s primarily achieved by performing multiple sets with moderate to high reps. 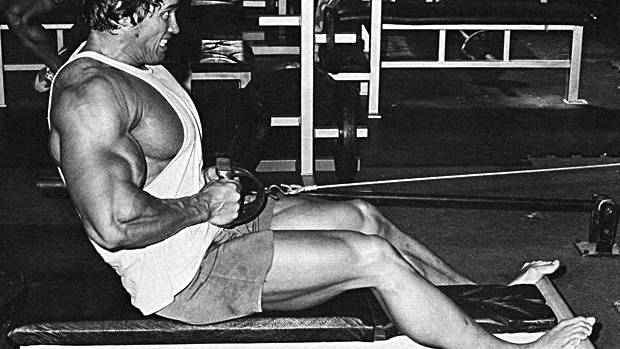 Here’s the short course: During a moderate-rep set, the veins taking blood out of working muscles are compressed by muscular contractions. However, the arteries continue to deliver blood into the muscles, creating an increased amount of intra-muscular blood plasma. This causes plasma to seep out of the capillaries and into the interstitial spaces – the areas between muscle cells and blood vessels.

The buildup of fluid in the interstitial spaces along with the osmolytic properties of lactate creates an extra-cellular pressure gradient, which in turn causes a rush of plasma back into the muscle.

The net result is blood that pools in your muscles, causing them to swell. Researchers call the pump cell swelling.

This is what Arnold had to say about the subject in the movie Pumping Iron:

“The most satisfying feeling you can get in the gym is the pump. Let’s say you train your biceps. The blood is rushing into your muscles. Your muscles get a really tight feeling, like your skin is going to explode any minute. It’s like somebody blowing air into your muscles. There’s no better feeling in the world.”

Where Naysayers Get It Wrong

Many consider the pump a temporary condition that’s strictly cosmetic. This belief is shortsighted. Studies have demonstrated that a hydrated cell stimulates protein synthesis and inhibits proteolysis (protein breakdown).

Muscle hypertrophy (growth) is ultimately a function of protein balance – synthesize more muscle proteins than you break down and you’ll pack on size. The fact that cell swelling simultaneously increases synthesis while reducing degradation is a muscle-building win.

What drives this swelling-induced hypertrophic response?

Increased fluid in muscle fibers leads to a stretch of the cell membrane. It’s like an overinflated water balloon. The muscle, in turn, perceives this as a threat to its integrity and responds by initiating an anabolic signaling cascade that ultimately serves to reinforce its ultrastructure.

Unfortunately, no direct studies have attempted to investigate whether these anabolic effects are attained from pump-oriented training. Still, the implied evidence gives reason to believe that it very well may have a positive affect on muscle growth.

Usually targeted movements that keep constant tension on the muscle induce the pump.

The occlusion and hypoxia created from “chasing the pump” leads to a long list of hypertrophy-boosting mechanisms. One of these includes increased satellite cell activity, which also increases the muscle cell’s ability to continue expanding.

So if muscle development is your goal, don’t be afraid to incorporate some pumping sets into your routine.

2 – Keep Your Mind on Your Muscles

Arnold was astute when he claimed that resistance training was more than just lifting a weight from point A to point B.

In his words: “The weights are just a means to an end; how well you contract the muscles is what training is all about.” 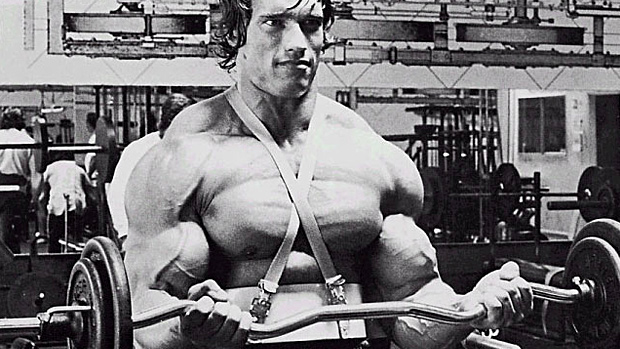 To maximize muscle development, he talked about developing a strong “mind-muscle connection” where he’d visualize the muscle being trained and feel it working through a complete range of motion during each rep.

While it may sound hokey, research shows that the mind-muscle connection can significantly improve muscle recruitment.

Researchers had a group of subjects perform two sets of lat pulldowns with only basic instruction. Then, after a period of rest, the subjects performed a couple of additional sets, only this time they received instruction on how to emphasize the latissimus dorsi while de-emphasizing the biceps.

The results? Muscle activity in the lats, as measured by EMG, was significantly increased in sets performed with a mind-muscle connection. In other words, simply concentrating on the target musculature resulted in greater activation of this muscle.

Here’s how to apply the technique for optimal effect: Rather than thinking about where you feel a muscular stimulus, think about where you’re supposed to feel the stimulus.

In the example of the lat pulldown, you must focus on pulling the weight down using only the muscles in your upper back. Continue with this thought process until you reach the bottom phase of the movement and then squeeze your shoulder blades together, feeling a distinct contraction in your lats.

On the eccentric portion of the rep, force your lats to resist the gravitational force of the weight so that the muscles lengthen in a controlled fashion.

Finally, when you approach the starting point of the exercise, you should feel a complete stretch in the lats, and, without hesitation, proceed to the next rep by repeating the process.

Keeping your mental focus channeled in this manner will direct the majority of stress to the target muscles of your upper back, thereby maximizing muscular stimulation.

Multiple studies have emerged for other muscle groups such as the abs and glutes, all showing the same thing – concentrated effort increases neural activation to the intended musculature.

Don’t get discouraged if it takes longer to develop a mental link with certain muscles than others. It’s generally easier to mentally connect with the muscles of the arms and legs than it is with those of the torso. With practice and patience, you’ll develop a connection with all the muscles in your body.

Arnold frequently employed visualization (motor imagery). He envisioned the way he wanted his muscles to look, and then imagined them taking this form while training.

Regarding his upper arm training, Arnold said: “In my mind I saw my biceps as mountains, enormously huge, and I pictured myself lifting tremendous amounts of weight with these superhuman masses of muscle.”

Visualization techniques have long been used in the field of motor learning. These cognitive tactics improve performance on motor tasks even without practicing the skill.

There are several theories that might explain this phenomenon. One proposes that mental imagery activates the same motor pathways involved in performance of the movement. There’s evidence that EMG muscle activity during visualization is comparable to physical practice, albeit at a reduced magnitude.

Other studies show that both visualization and practice result in distinct neurological changes, although some research suggests that the changes take place in different areas of the brain.

Researchers say that visualization can also have a positive affect on resistance training performance. Another study showed that lifters significantly increased their ability to achieve a maximal voluntary contraction in the leg press by simply visualizing the feel of the movement during the rest period.

Subjects also increased the total number of reps they could do compared to a control group that didn’t use visualization. To put this into perspective, a brief bout of mental imagery between sets can increase both the quality and quantity of lifting performance.

There’s another benefit of visualization that plays a role. It tends to increase motivation, spurring you on to perform at your best. So if you can develop a mental image of your muscles, and make that image very real – just like Arnold did – results will follow.

Watch nearly any training video of Arnold from back in the day and you’ll see images of him posing in front of the mirror. Arnold would pose between sets, pose after a workout, and pose on his off days. 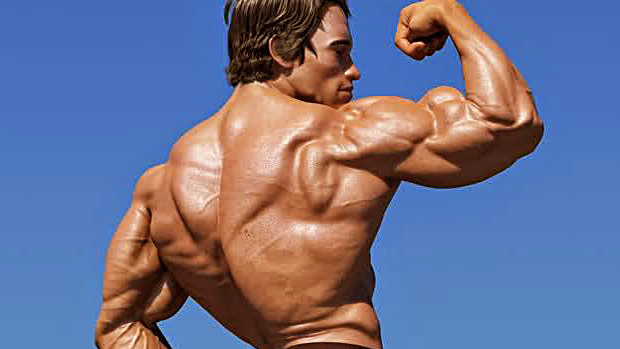 He’d pose alone and he’d pose with his peers at Gold’s Gym Venice. Hell, in Pumping Iron, he even posed with Franco in the shower! He’d spend hours hitting poses for every major muscle from every possible angle, sometimes to the point of exhaustion.

His purpose for posing was to hone his presentation skills. Bodybuilders ultimately win or lose a competition based on their ability to display their physiques. But for Arnold, there was more to posing than simply being able to look the part on stage.

Arnold believed that posing made his muscles harder and more developed. He even claimed that it aided his lifting performance. He was on to something.

The Science of Posing

Biomechanist Dr. Mel Siff wrote about the benefits of posing in Supertraining. Siff referred to it as “loadless training,” noting that Russian scientists used the technique to enhance strength of muscles and connective tissue.

Although studies on the subject are scant, implied and empirical evidence suggests that posing does have beneficial effects on muscular strength and development. Perhaps the greatest being its ability to improve neuromuscular control.

It helps you develop the connection between mind and muscle. With consistent practice, you become better able to maximally contract your muscles, thereby allowing you to generate more force during your lifts.

As a result you enhance your ability to target a given muscle during training, which can result in heightened growth and improved symmetry.

So if you think posing is just for bodybuilders and teen wannabes, think again. Best of all, you don’t have to labor for hours like Arnold did to realize results. Even spending five or ten minutes a day actively contracting your muscles can lead to greater gains.

Arnold didn’t believe that bodybuilders should train like powerlifters. But he did feel that bodybuilders needed to master many different techniques. One essential technique for physique mastery was, in his opinion, maximal strength training. 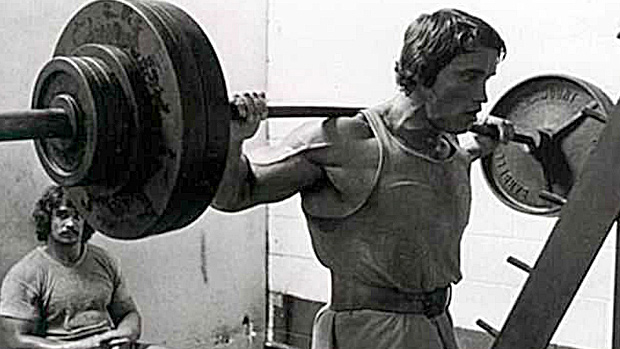 Here’s how Arnold went about it. Most of the time, he stuck to high volume training sessions consisting of moderate to higher rep ranges with lighter loads. He trained this way around four days per week.

But approximately two days per week he’d pick a “power move” for a particular muscle and test his strength.

Impressive for a bodybuilder who didn’t specialize in these lifts!

Anecdotal evidence suggests that bodybuilders who push their strength levels on the big lifts tend to exhibit more muscularity than “pretty boys” who just pump away with light loads on single-joint and bodyweight exercises.

This isn’t to say that lighter weights aren’t useful. But the best results are usually seen when heavy, low to moderate rep compound training is combined with lighter, moderate to high rep targeted training.

Trial and Error: The Origin of Success

Successful people tend to figure out the best methods for achieving results.

If it worked, Arnold incorporated it into his training arsenal. For this reason he and his colleagues were ahead of their time, learning through trial and error to employ a variety of methods for maximum muscularity.

Go heavy with the big basics but don’t avoid the pump. Figure out how to maximally contract the different muscles and visualize success. Learn from the Governator and watch your muscles grow.