Every year in May I go off to chase a dying dream – pro baseball. Having suffered some major injuries at key moments in my career meant my path was going to have to be the one less traveled. Independent baseball has been great for my soul, but terrible on my body.

If you've ever taken 5 months off from your normal workout routine and replaced it with tons of overnight travel, long days in the August sun, gas station meals, and limited gym access, you'll know what a toll it takes on the physique.

I typically enter my season at 190 pounds and 8-9% body fat; I show visible abs, a reasonably wide back, and large thighs. By the time I get home in mid to late September, I'm 185 pounds and 12-13% body fat. By my own standards, I'm skinny-fat – and there's not much worse than skinny-fat. Sigh.

Rather than ease into things, I bum-rush the weights and push through the soreness. Three years running I've added 10 pounds while reducing my body fat by 2-3%, all in a month's time.

In this article I'm going to share my 4-week plan for the 15-pound swing – 10 pounds of lean mass while removing 5 pounds of fat. Be advised, however – it's not for the faint of heart.

This isn't a complicated plan. Rather, it's quite simple because the two key components are volume and hard work. When you have those two components, you're most of the way there, anyway. Here's how it breaks down:

Following are the big players in this scheme, the ones I feel provide the best bang for the buck considering the formula above.

Front squats are a fantastic builder of the core, quads, and back, not to mention they're easy (relatively) to learn. Almost all of my young athlete clients start their barbell squatting careers with the front squat, and it pays major dividends later on as they learn the other variations.

On this plan we're going to be pushing through long sets, so having a low-technique squat variation is crucial. The weight placement won't allow a round back, so you have less to worry about as fatigue sets in.

I watched my back get bigger and wider than it's ever been doing almost nothing but front squats. If you have a big front squat, you have a solid back. Can't have one without the other.

This one is going to get some jeers, but some of my push-up sets are among the hardest tests of my training career. We have two in my facility that we especially like, which are employed a number of times during this month of hell.

The rules here are simple: take the number of continuous push-ups you can do in a set before failing and multiply this by 2.5. Then, complete this number without allowing the knees to touch the floor. You can hold plank or pike to the down dog position for rest, but that's it.

The volleyball player in the video had a 50-rep set because of her 20-rep personal best. My personal best is 60 consecutive push-ups, give or take a few. So, my Horrible Hundred was 150.

That means that last 50 push-ups took roughly 3.5 seconds apiece. The last 40 were basically 40 sets of 1. This is called grinding it out.

Oh, and core work is included in this test – don't forget that every minute of push-ups is a minute in plank, and thus a great core workout.

We also do a to-failure set wearing a 50-pound weighted vest. My personal record is 50 consecutive push-ups without allowing my knees to touch. This was one of the hardest things I've ever done.

The king of upper body exercises. Those who can do 4 sets of 12 are, in my book, deemed strong. Problem is, every year when I return from the season I can only get 4 or 5 in my best set.

I recall Chad Waterbury writing about total volume being the important factor in workouts, rather than the way they were chopped up. You can't get your chin-up numbers up fast enough if you only designate a handful of sets to them – 4 sets of 4 just won't be enough volume to see significant growth.

The chin-up is the number one exercise in my gym that gets assigned goal-reps. Because most untrained clients can perform few, if any, we have to get volumes up.

I know what you're thinking. Overtraining! To that, I say, go talk to John Broz, any elite gymnast, Olympic lifter, distance runner, baseball pitcher, or powerlifter. Your body will adapt.

Can you sustain 200 chins a week forever? I'm confident the answer is no. However, for a month it's doable, and I've done it numerous times.

Plus, we're not starting there – we're working up to it. You'll be sore, tired and mentally drained, but your back and forearms won't look like cigarillos anymore.

One tip, though – use freely rotating handles or rings. They'll keep the elbows happier. At the very least, use neutral grips if you don't have access to handles.

Glute-ham raises (GHRs) are the bomb. I love them for what they've done for my squat and for the size of my hamstrings. Yet, weak people don't love them, and for good reason – "It feels like my hamstrings are tearing."

Yes, this is the exact feeling an untrained person gets the first time they jump on the GHR. For this reason, it's not the best idea to start banging out mammoth sets of them if they're beyond your ability.

What I prefer to do is either start with sliding leg curls and build strength, and/or reduce the lever arm on the GHR and gradually lengthen it as we go.

This is also the same plan of action I use with some of my exceptionally tall pitchers who aren't quite there yet for full glute-ham raises.

The glute-ham raise is another exercise that's well suited for the goal-rep scheme in this plan, and we'll use it until proficiency increases to where we can then return to higher volume sets of 8-12. Sliding leg curls are great for sets of 12-20.

Face pulls are a great, simple rotator cuff and upper-back exercise. We prefer to use a 41" mini band and stretch it apart during the pull. This puts a little more emphasis on external rotation.

I like to mix the scapular retraction and external rotation we get from face pulls with Y raises that provide movement on the scaption plane. I'm not picky – do them prone, at an incline (shown) on a bench, or stability ball.

If you use a chain, as shown in the video below, you'll get the added benefit of dynamic stability. The faster you move with the chain and pause at the top, the more their erratic movement will force you to stabilize the joint.

During this program the arms get plenty of tension and stress from the high volume of overhead pulling. Because of this, it's not a great idea to be concurrently deadlifting heavy.

But the back and hamstring development of the Romanian deadlift is a great compromise – we use lighter weights for higher reps to build work capacity. The front squat stays as the main leg lift, with glute-hams and Romanian deadlifts as assistance work.

I'm not going to go into any sort of depth regarding the nutrition required of this program. However, there are three maxims:

Maxim 1: Peri-Workout Nutrition is a Must!

Surrounding your workouts with a shake containing a 2-3:1 ratio of carbs-protein is ideal. For most, this is going to be somewhere in the 60-90 grams of carbs and 30-50 grams of protein range.

Don't worry – your body will use all of it. Check out the Plazma™ for a very effective approach with the math done for you.

If you aren't very carb tolerant, reduce the carbs slightly and stay where you think your body responds best – we're all different. But look at this shake as your saving grace to get you through to next week.

To get strong and big in a hurry you need calories, so don't expect to subsist on broccoli and green tea. All I tell my clients who want to gain good weight is to eat green things in each meal, choose whole foods first, and then pound as much of it as possible.

You'll need the oatmeal, rice, sweet potatoes, and quinoa to get enough calories to complete these workouts, but you need to start every meal with the veggies and fruits that are going to supply the micronutrients your cells need.

You've read enough about fish oil without me having to talk you down from the Omega-6 ledge yet again. I recommend a liquid fish oil or high-potency pill like Flameout® that will keep your joints happy. The elbows especially may be stressed from all the overhead pulling; fish oil is going to keep them relatively calm.

These are all important aspects of any good program, but this isn't a typical program – it's a rush on size and strength. If you want to get more flexible, increase tissue quality and mobility, go ahead and add it at your discretion.

But all that good stuff is beyond the myopic scope of this program.

* if you're man enough to make it

We're using three different rep ranges on the squats – 10, 6, and 3. We need the 10-rep days to build volume and lactic acid tolerance – if you're deconditioned, you'll need to develop some stamina in a hurry to handle the rest of the week.

The 3-rep day is intended to get maximal strength up so that you can handle more weight on the 10 and 6 rep days. I like placing it after the 10-rep day because it's shorter and requires less mental energy, even though the actual bar weight used will be lower due to fatigue from the 10-rep day.

The 6-rep day should be the hardest, that magical mix of strength and hypertrophy where you can put a much more substantial load on the bar and still have relatively high time under tension and total work volume.

Jason Ferruggia is a big advocate of 6-8 rep ranges for hypertrophy, and I'm an absolute believer as well. With these three squat days you'll have three distinctly different bar weights that are all intended to push your strength and size back up to respectable heights in a hurry.

Hate front squats? Go with a back squat if you prefer. I favor the front squat, though, for it's simplicity, back-building properties and relative impunity to lower back roundness.

Further, if you can't handle GHRs I suggest the body curl or a higher volume of sliding leg curls, stability ball curls, or another hamstring flexion exercise.

Can't hack the overall volume? Don't have the guts to finish the Horrible Hundreds? Too sore at the start of the next workout? Well, I don't have much help for you there – you're going to have to tolerate a certain degree of fatigue, ache, and soreness.

You simply can't avoid it while declaring blitzkrieg on the iron. Getting good results in a short time comes with a price – it ain't easy and I assure you this won't be fun.

But if you can make it through the month, you'll laugh as you return to your 3-day split. Rest days? Only squatting once a week? That's chump talk.

See you in the gym. You'll be spending a lot of quality time there. 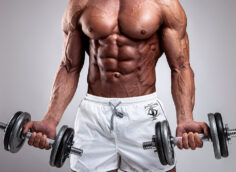 Does the muscle pump matter when it comes to growth? Does how a muscle feels, before or after lifting, matter at all? Get the facts here.
Bodybuilding
Christian Thibaudeau September 19