When it comes to weight training, the deltoids are unique. On the one hand, they're probably overtrained. That's because the delts play a role in just about every compound exercise. Some estimate the front or anterior delts of a bodybuilder are five times larger then a non-weight trainer. Not only do most bodybuilders train the front delts directly, they also do things like inclines bench presses and dips which also hit the anteriors.

On the other hand, the rear, or posterior, delts are often neglected by most lifters and may be only a little larger than a non-weight trainer's. This not only takes away from their physique, it can lead to imbalance injuries and cause poor posture by giving them a "rounded shoulders" look. The side or medial delts fall somewhere between these two extremes.

Let's assume that you're an average weight trainer with a few years of experience. That means your front delts are probably overtrained and/or overdeveloped and your rear delts are under-trained and/or underdeveloped. How do you fix it? Easy, use this "3-2-1" program.

The premise is simple: give priority to the rear delts by using more volume and putting them first in your shoulder-training regimen. And since your front delts are probably already receiving adequate stimulus through other movements, they'll get trained the least and not until the end of the program. (The medial delts, true to the their name, will fall somewhere in the middle.)

Bend forward at the waist and bend the knees. Leading with the elbows, raise the dumbbells without using any body sway or momentum and pause for one second at the top of the movement. You can place your forehead on an incline bench or similar to avoid lower back stress and reinforce good form.

We picked this one up from the Westside crew. Grab a weight plate at 3 o'clock and 9 o'clock. Raise it until you can see through the hole, pause one second, and lower it under control. Keep the body rigid and avoid using body English or we'll send Louis Simmons over to breathe down your neck, too.

Do this simple test on your thoracic spine, apply the easy fixes, and watch as your chin-ups, pull-ups, and OH presses explode.
Back, It Hurts Fix It, Mobility, Training
Brad Kaczmarski September 25 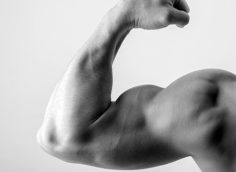 This bodyweight superset is tougher than it looks. Prepare to hurt the next day. Check it out.
Training
Andrew Coates July 16

Everyone does shrugs for traps, but that's the worst exercise choice for some people. Here's how to train traps and keep your shoulders healthy.
Bodybuilding, It Hurts Fix It, Powerlifting & Strength, Shoulders, Training
Tony Gentilcore August 17