You Should Be Jerking

The jerk is in the overhead press family, but it’s much more violent. The bar begins at shoulder level then ends with your arms locked out overhead. You’re able to use so much more weight than you would with a simple overhead press because of the way it gets up there.

You stick the jerk by driving it up, and you drive it up by dipping under the bar and splitting your stance: one foot solidly in front and the other solidly behind your body. It’s an explosive movement that calls upon every muscle in your body, your nervous system, and your guts… if you choose to go as heavy as you can.

And once you start jerking, you’ll realize your own strength and hunger for heavier weight, even if you’re not technically a “weightlifter.”

Get Your Jerk Up: Two Powerful Drills

Ask most weightlifters what the most useful exercise is to build the jerk and most will tell you, well, the jerk itself… along with the power jerk and push press. But there are two other exercises that lifters don’t think about.

The first is called jerk steps, and the second is lovingly called the death march. Both simulate the forward step in the split jerk.

1. Jerk steps – You’ll use a barbell held starting at the chest or neck. This is the best variation for those serious about getting into weightlifting and possibly competing.

2. The death march – You’ll use dumbbells or kettlebells and do an almost identical jerk movement of stepping forward with one foot. And if you’re looking for an effective way to challenge your metabolic conditioning, or you’re just wanting a new posterior chain movement, the death march is hard to beat.

Both of these exercises allow you practice correct leg geometry in the split jerk with the front shin vertical, back knee down, and the feet with a slight toes-in position. Both involve a slower speed of movement than the actual jerk, which will make it easier for you to move correctly, particularly under load.

One thing that goes beyond strength and good motor patterns is the ability keep your mental focus while you’re under extreme stress. The death march is the grand champion of the miserable feeling that makes you want to give up, lay down, and die. It’s one of the toughest exercises you’ll ever do.

It’ll take you to that dark place everyone fears. CrossFitters enter that place when they finish Grace or Fran, but for a weightlifter it’s always the place you go after a tough clean and right before a jerk. The weightlifter may be slightly dizzy and the pressure of the bar on the chest is causing lack of blood flow to the brain. Vision starts to shrink and you can feel as though you’ll lose consciousness if you don’t get the bar off your chest quickly.

As much as being in this dark place sucks, doing well while you’re there is trainable. If extreme stress is new to you, then your ability to fight through it and perform well anyway will be low. But if you go to this place regularly you’ll learn to deal with the stress and perform anyway. This is called building mettle. And there’s no better way to do it than the death march. 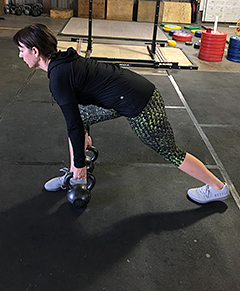 Keeping your balance will become an issue, and you might start to weave a little. When this happens, congratulations! You’re now feeling just like a weightlifter on his or her third attempt clean and jerk right after a particularly tough clean.

This is actually a glute, ham, and lower back exercise that just happens to push an athlete into metabolic hell. The first time you do the death march you won’t have to walk more than 10 steps before you notice that your whole posterior chain is lighting up.

The first time you go for 40 yards you wont be walking normally for a few days. The death march hits both the glutes and the hams differently than exercises like RDLs, stiff-legged deadlifts, and even lunges.

The further you go the harder this will become. Your steps will have to get shorter. I’ve seen a 19 year old weightlifter do the death march with 120 pound dumbbells for 80 yards without a pause. You probably can’t do that yet. And don’t try to unless you can afford a couple of days without being able to walk. 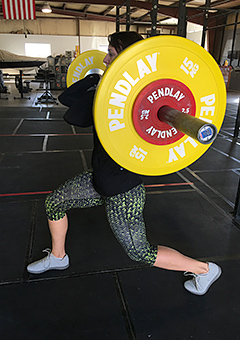 This initial backward movement is important because it doesn’t allow forward momentum to materialize. Forward momentum won’t affect this exercise all that much, but we’re trying to build good habits for the jerk, and forward momentum is a killer when the bar is overhead in the jerk.

You can record yourself (from the side) recovering from a split jerk solely by stepping forward with the back foot. You’ll see that the bar moves forward usually between 8 and 12 inches. Not much of a problem with an empty bar, but with 400 pounds over your head, it becomes a problem.

Jerk steps are best done where you have about 20 yards of space to travel forward, then back again. Twenty yards gives most people the space to do 10 or more steps in one direction. It’s possible to do them without the space to walk forward, but it’s harder. One of the many advantages of actually walking forward while doing them is that you have to walk back with the other leg leading the step, and the walk back has to be the same distance as the initial walk forward.

There’s no way to cut the set off and rack the bar until you get back to the squat rack. And believe me, you’ll want to rack the bar early. This exercise is the only one I’m aware of that allows you to practice the same movement pattern you use in a jerk recovery with significant weight as well as enough volume to really affect the movement pattern.

Because the movement is slower than the jerk, it’ll be easier to attain the correct leg geometry. And since this exercise can be done for more reps and more weight than the actual jerk, any new, more efficient movement pattern built should trump other less efficient movement. 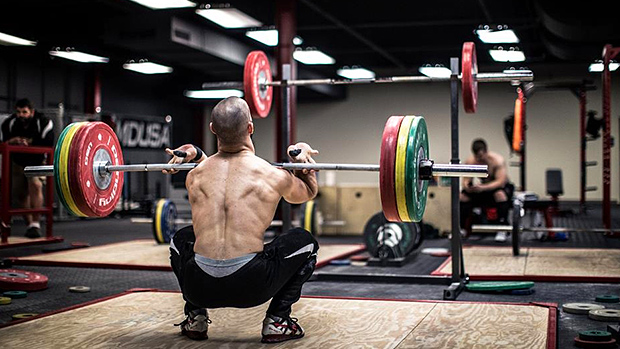 Unlike the jerk, both jerk steps and the death march have the advantage of helping you build symmetrical muscular development, and even correcting asymmetry. Now normally, symmetry in the jerk isn’t a huge deal. But it can be for some. In certain lifters, the uneven development of the glute on the side of the foot that steps forward becomes overdeveloped in comparison to the opposite side.

This uneven hip development can lead to one hip sitting higher than the other and lower back problems. Several lifters that I know have ended up with lower back pain which was traced back to uneven hip development caused by the jerk. The latest to have this symptom was in 2014. James actually had to stop split jerking and go to the power jerk, an exercise where he’s capable of about 20 kg less weight than the split jerk.

Jerk steps was one of the exercises James did to cure the imbalance. And since you can usually use more weight when doing jerk steps than you can in the jerk, and you can usually perform many more reps with it, it doesn’t take long to cure an imbalance. For most people any imbalance will be cleared up in a matter of weeks.