So you want to put on mass, fast. I have a program that will do just that, but first, some guidelines:

1 Mass building, like fat loss, has to be done at the exclusion of everything else.

A guy with 14-inch arms will sometimes ask me about a mass building program, but worry to death about his "six pack" (meth addicts have six packs, for the record), his cardio, his "game," and about five other things. Once you get 16-18 inch arms, I'll allow you to worry about all those other things.

2 You need to spend time under the bar.

You have to find ways to load your body and move the weights for up to several minutes without releasing the load (putting the bar down or resting on a machine). This program is going to be based on this insight.

You are now going to stop worrying about every calorie as if you were a college cheerleader. On a mass-gaining program, you must eat. When I put on forty pounds in four months my freshman year in college, I used to eat some sandwiches before dinner so "I wouldn't be so hungry during dinner." Think Shark Week when you sit down to eat and warn the others at the table not to reach across your plate. Likewise, peri-workout nutrition is imperative.

4 You must master resting.

I know there's this urge to do this and that and this after every workout, but for a mass building program, you have to accept that cardio consists of changing channels with the remote. If you don't sleep eight-plus hours a night, it's going to impact your mass gains. Many famous bodybuilders have advocated the "muscle nap," a long nap in the afternoon to simply gain muscle. Remember, you grow while you rest. Pick-up basketball games are not rest!

Well, let's put it this way: Good bulking programs have few movements. When I had my most success with mass building, the number of movements I use is always around seven or eight, total. Learn to love them.

6 You need to get some reps in.

Although people have gained amazing mass on lower reps (1-5), the load needed to gain mass on a low-rep program is difficult for most people (and mortals). So, until you can handle a 400-pound bench, a 500-pound squat, and a 600-pound deadlift, you're going to need reps to bulk up. There's something magical about mass gains around the 5-10 rep range and the last century of strength enthusiasts will bear this out, too.

7 Never do fewer than ten reps in the back squat.

There are people that can ignore this advice (powerlifters mainly), but for the bulk of the population this is wise advice. Each and every time you load up the bar on your back, get ten reps in. It gives you your needed time under load and it seems to stimulate the whole body, along with the appetite!

Few beginners know the answer to the question, "How long do you rest between sets?" The correct answer is, "It depends." An advanced lifter might take a year to recover from a record lift while a new lifter is recharged and ready to go literally seconds after doing a machine movement. For mass building, think "around" three minutes for the squat and bench and 90 seconds for the other movements. Again, your mileage may vary.

9 Leave one or two in the tank.

In nonlifter's terms, always finish a set knowing you could have done a few more reps. We all love the images from Pumping Iron with all the forced reps, but for most guys who need mass, well, you just aren't there yet. It's better to get an additional set or two than it is to roast on exercise.

10 Pamper yourself (sort of)

This is definitely old school advice, but "save yourself" on a building program. Wear extra clothes so your body doesn't have to use resources to stay warm. Park closer. Find shorter routes to everything. Sit more. Remember, this isn't a lifetime plan but a short, focused, fiery attempt to gain mass.

The program is based on an older successful concept of training that repeats the same exercises daily, but each workout still has you focusing on certain body parts. For example, you'll be focusing on squats on Workout C (lucky you!), but you'll still be repeating the movements from Workouts A and B.

There are several excellent reasons for this. First, mastery of the movements is a key to mass building. You won't be making great gains if you have to remind yourself to "bend elbows" when you bench press; in fact, you may kill yourself. Second, the best movements for mass building make up a very short list and you need to do them. A lot. I wish it were more complex than that. Finally, the best tonic for soreness is to do the movement that got you sore in the first place. Enjoy!

>We'll be doing the back squat each and every workout. There's no more important movement to master in your search for mass.

>This is a "tonic" throughout the program. With soft knees and a light weight, lower the weight down about sock height and stand back up. Try to feel it in the hamstrings, not the lower back. If you have any issues, don't do this movement. It's a post-squat tonic, not a training movement.

>The pull-up serves double duty as a great lat builder and perhaps the best ab exercise I know. I've yet to find someone who can do 20-plus pull-ups and can't dominate any test of abdominal strength.

>In the past few years, I've changed my tune on machines. The standard barbell bentover row is marvelous, done correctly. It's that whole issue with "done correctly" that I find issues with. If your facility has a good machine that doesn't stress your lower back, please use it.

>With the dumbbell clean and press in the first part of the workout, the bench press will take care of all your other needs for upper body mass and pressing.

>I hate how the barbell curl is maligned. I've always thought that the strict curl is a window into the general strength level of an athlete. I once saw a guy strict curl – no back bend or elbows sliding behind the lats – with 225 pounds. It remains burnt into my brain. Funny thing, he also had really, really big arms. Go figure.

>My answer to the world's worst strength question, "If all you could do is one movement, what would it be?" If you have the courage to push the weights up to half bodyweight in each hand and trudge bravely "out there," you'll discover that there's not an inch of your body that won't have an opinion about what you just did.

After six weeks of A/B/C workouts and lots of food, assess your progress. I strongly suggest you begin the program with a before picture and finish it with an after pic. Body weight gains depend on a lot of factors, but I've seen these common sense programs and approaches do far better than some of the voodoo I often see on the web.

To do a kettlebell swing correctly, first you need to be able to do perfect dumbbell or kettlebell deadlifts. Here's how.
Deadlift, Kettlebell Training, Tips, Training
Dr John Rusin July 7 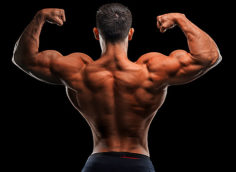 Build your back and legs with this easy and convenient equipment swap.
Training
Andrew Coates February 15