The Soviet Union officially ended on December 26, 1991. Three decades prior to that, weightlifting competitions across the globe were ruled by Soviet athletes.

They set so many world records and gained so many titles from the 1960s through 1990 that it's now known as the "golden age" of weightlifting. And Soviet athletes became known for their individual longevity, successfully competing and setting records a decade longer than most of their competitors.

So what was the secret to their success? It took some brainy Russian sports scientists with last names like Medvedev, Chernyak, and Matveev to figure it out. They analyzed training schedules of the most successful Soviet weightlifters and found one common theme: variability. And a lot of it.

Volume and intensity among these elite weightlifters shifted so often, and sometimes so drastically, that you'd swear their periodization plan was based on pure randomness.

I learned about the Soviet's random success from Pavel Tsatsouline. He also taught me the value of rolling dice (or a single die) to randomly determine training parameters for a workout. Since that time I've been experimenting with various ways to roll a die to promote training variability. Here's one of my favorites:

The best set-rep parameters are those that keep changing. So if you want some variability in your workouts, give this a try to stimulate new gains and get you out of a rut. Use it for as long as it keeps working. And if you happen to roll the same number two workouts in a row, roll again.

Think you're ready to sprint? Don't be so sure. Toughen up your hamstrings first. Here's how.
Sprinting, Tips, Training
Dean Graddon April 23

To really make these work, stretch your abs at the top of the movement and squeeze them as hard as possible at the bottom. Use a 3-4 second negative.
Abs, Exercise Coaching, Tips
Eric Bach June 7 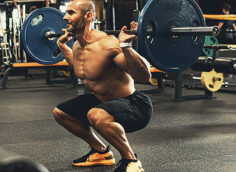 Stop arguing. How low you go depends on your goal. Here's your guide.
Christian Thibaudeau May 3