Part 1 of this article set the mathematical mark for where to begin an assault on our body fat stores. Yes, we did some calculations (I know, where's the fun in that?), but like any good traveler, we also took a zoomed-out view of our entire journey and the ironic twists that lie in wait for us. This becomes increasingly important later as many of us are prone to becoming "too close to the issue" as weeks progress. So whether you've seen ways to compute resting metabolic rate (RMR) before or not, go back and check out Part One to better understand the slow uphill climb of fat reduction.

We now know how many calories we need (more or less) to hold a steady body weight. We could even compare the numbers to a daily food record to ensure compatibility and tweak it further. But at present, we're not looking for "energy equilibrium" and certainly not for an energy surplus. What we now need is a full-blown inquiry into exactly how that energy balance scale is best tipped toward fat loss.

Creating a negative energy balance isn't accomplished by diet alone. Remember our calculations of energy (kcal) needs for weight maintenance? Well, the easiest way to drop below said maintenance needs is to simply go back and subtract-off the kcal allotted to cover our "cardio." Why replace all those calories if the purpose of cardio is to lose weight, right?

For those looking to seriously lose fat mass at a noticeable pace, though, these sessions should generally burn 350-500 kcal. That's about an hour of uphill walking (say, 3 mph at a 4-7% incline) five times per week. (You can see that I'm a fan of unstylish, lower-intensity, steady pace "cardio" done several hours before or after weight lifting. But the truth is, intensity may not matter.[2])

Since each pound of fat comprises 3500 kcal and assuming 100% of losses are fat ( which is actually unrealistic), the results of our uphill walking would be 1/2 to 2/3 pounds lost each week. That's an estimated 4.0-5.5 pounds in eight weeks. This would consititute a noticeable amount on an already fairly lean guy–noticeable at least to the individual– but there's a caveat. The added stress of frequent aerobic activity dips into muscle building resources, taxes neuro-endocrine systems at least some, and runs you the risk of "volume type" overtraining (the parasympathetic variety for those who care).

It's just not prudent to add more if you care anything about preserving muscle mass. So aerobics leave us with a best-case scenario of perhaps six pounds burned-off in eight weeks time. Not fast enough? Okay...

Here's where diet comes into play. By restricting, say, 350-500 kcal per day we've just doubled the rate of weight loss explained above. For an adult male who routinely eats 3000 kcal each day, that's do-able. It's just a 12-17% restriction. Ditch your evening pasta and replace it with a half-bag of frozen veggies and you're there my friends. (In fact, my thoughts on "AM carbs and PM fats" work in part due to the lower 24-hour energy intake they encourage.) You're now stripping-off 12 pounds in eight weeks and you're not alone in noticing the change! Girlfriends are touching your abs and jealous friends are asking how you did it.

Note that I'm now talking about combined exercise expenditure plus dietary restriction, however. The two approaches must be combined. Trying to use solely one or the other gets you nowhere fast. Just as with exercise alone, there's a caveat regarding dietary approaches alone. The "Restriction Contradiction" is upon us. Go back and take another look at Figure 1 in Part 1.

This metabolism-crushing caveat is in fact worse for fat loss than the overtraining risk associated with excess exercise. Remember the beautiful 12-pound loss we experienced above? Well, after correcting for the body's attempts to enter "starvation mode" and protect itself with a slowed metabolism, we may only see body weight losses of about 60-80% of the diet portion mentioned above (now 2.4-4.4 pounds), leaving our total girlfriend-noticing losses around 8.4-10.4 pounds. Still, I'll take those numbers over either method alone, eh?

This kind of moderate dietary restriction plus cardio (and weights, of course) bodes well for inducing fat specific weight loss with reduced risk of muscle loss and crushed metabolism. Let's look at a bunch of studies...

The table suggests weight losses of 0.5-1.6 pounds per week are possible in reasonably healthy persons, but are still associated with some decline in either T3 or resting metabolic rate. Hence, as we've said, diet alone doesn't maximally strip-off fat as time marches on. This problem is prevalent enough to get scientists hypothesizing about ways to prevent or reduce the "starvation compensation" (e.g. plummeted deiodinase enzyme activity). Zinc, and selenium, are examples (15) of their hypotheses, as are guggul sterones, of which we've heard so much. In any case, planned disciplined physical activity can continue to serve as a calorie drain – even in the face of slowed RMR.

So how low can you go? How aggressively can one cut back at the dinner table? Based on the literature presented here, it looks like perhaps a 20-30% restriction (that's a 600-900 kcal cut-back for a young male) is pushing the envelope. This appears to induce body weight losses that are largely FAT. Any more, however, and metabolic rate, coveted muscle mass, and future weight maintenance are at increased risk. Even your immune function can suffer.(21) Indeed, researchers have suggested that moderate restrictions are best.(9) Remember, drops in metabolism and muscle mass play off one another to grind fat loss efforts to a halt and make you look, well, small and flabby.

This question is tough and could easily be an article in itself. For our purposes here, let's just say that as calories are cut, protein use (nitrogen retention) is hampered in the body.(6) It's well established in the literature that the human body needs energy (kcal) to put protein to maximal anabolic use. Many readers have heard me go off on the calorie needs for building even a single pound of muscle (about 2800-3000 above maintenance needs). Protein synthesis is an energy costly endeavor. I've often used the analogy in the classroom that "having plenty of bricks (protein) isn't enough; a bricklayer needs gas for his equipment in order to create a large building (body)."

If we accept that a weight trainer needs 1.2 – 1.8 grams of protein per kg of body mass (up to nearly a gram per pound) while eating enough calories, then it stands to reason that more is necessary when calories are restricted.

Of course, there are dissenters. It's been reported that non-athletes may not benefit across-the-board from increased protein while dieting.(20) Diabetics and sedentary folk are not bodybuilders, however. They generally aren't trying to preserve cosmetic "muscle fullness." The recommendation has been made elsewhere on this site that 1.5 g/ lb. is needed for hard-training, muscle-obsessed T-men. In a calorie-restricted state, that isn't unreasonable, even though it's a ton of protein and wouldn't be an absolute requirement, per se, during most of one's non-dieting year. But when we consider the whopping thermic effect of food (TEF) that protein possesses and the fact that this TEF is maintained during several weeks of hard dieting (20), it's a logical choice during energy restriction anyway.

Listen, as bodybuilders, we're not looking for maximal weight reduction. We're not willing to sacrifice substantial amounts of lean mass in a quest for gross weight loss. If that kind of Gandhi diet is okay with you, I suggest you pick up some old women's magazines, nibble your celery sticks and obsess only over the scale; that should help you squeeze into your old skirt.

Much to the contrary, we're pursuing a much more painstaking task: muscularity. Selectively removing body fat while stabilizing muscle mass takes time and some degree of patience. It's like cooking or getting tan. You can't cook a steak at twice the heat in half the time. Nor can you get the "savage tan of the islands" in one day by lying under new tanning bulbs for 2 hours on your first session. In either case, you're left with a small burnt piece of meat.

Waiting a realistic eight weeks before expecting visible, measurable results is important. Even in a lab setting it's difficult to assess body composition changes in just 4-6 weeks! Holding the course you set for yourself with minor adjustments (perhaps upping the treadmill work from 45 to 60 minutes or cutting another 200 kcal daily after two weeks of stagnation) is necessary to discover what works for you. It's a step by step process.

Personally, once I find myself losing weight at a steady pace of 1/2 to one pound-per-week for six to eight weeks, I take a full week off (of both restriction and treadmill) and increase my carbs by about 200 grams (800 kcal) daily. This psychologically and physiologically sets me up for another six to eight weeks of dieting.

Alternating calorie intake too quickly (every-other-day) doesn't seem to abolish the "Restriction Contradiction" (i.e. maintain energy expenditure) anyway, (7) so a full week's repletion makes sense. It allows for superior glycogen replenishment and muscle preservation that's otherwise at risk on a low-carb diet.(18) And thermodynamically, it's virtually impossible to replace the six pounds of lost fat (21,000 kcal) with a week's worth of respite from the treadmill and the extra carbs (8,100 kcal). Even with a slowed metabolism, this approach is highly unlikely to set you back to "square one." Call it one step back in order to take three steps forward.

So now you've digested my little investigation into the ironic world of calorie balance. I've simplified the pros and cons of inducing a kcal deficit (believe it or not!), but in the end it's an ever-steeper uphill climb. Restricting kcal at the table, inducing a negative energy balance with exercise, or even simply getting down to a new, lower body weight itself sets your body's protective mechanisms in motion.(17) It wants to get back to where it was. Fortunately, even though fat loss becomes increasingly difficult after those first few pounds, we can still drag our bums to the treadmill and keep after our goals at the dinner table. Over months to perhaps years of maintaining the new lifestyle, I believe the body comes to accept (adapts to) its new environment/ set point. Consistency and patience are keys. Remember, unrealistic expectations and misguided desires for immediate gratification will leave you small and fried; don't burn yourself like that piece of meat.

How to Eat Like a Bodybuilder, Even at McDonalds
Feeding the Ideal Body, Nutrition & Supplements
John Berardi, PhD February 23 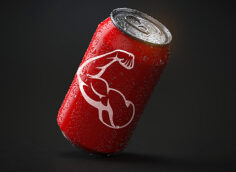 Can Coca-Cola, or for that matter, any cola drink, help you peddle faster or lift more total weight? Check out this new science.
TC Luoma September 4