The subject of collagen supplementation creates very little buzz in the lifting world, which is weird. Hell, it's the main component of connective tissue, which includes ligaments, tendons, and cartilage and accounts for roughly 25 to 30% of the protein mass in the human body.

If the connective tissue that provides the scaffolding for muscle is weak, you've got the equivalent of a house that wasn't built to code. As soon as an earthquake hits or a hurricane blows, down comes the house.

Let me spell it out for you. If the connective tissue is weak and you're lifting heavy, a tendon can blow, a ligament can rupture, cartilage can tear and fray, muscles can just give. At the very least, you ache an annoyingly large percentage of the time.

While it's begrudgingly accepted that adding collagen to your diet through food or supplementation is a terrific idea, few lifters, let alone athletes, do it.

The difference? Ingesting collagen works, and it does so for a very simple reason. Collagen contains large amounts of amino acids, glycine in particular, that are often in short supply in humans and that are crucial to the production of collagen.

So in this case, the raw form of the very substance you're lacking is broken down in the digestive system and used to make the very same thing – collagen.

All of that's accepted science. However, there's another, little-known use for collagen, one that plays a huge role in not just structural integrity, but the actual way muscles develop and function.

Marius Kirmse and his colleagues recently attempted to determine the effects of long-term collagen supplementation and resistance training on body composition, strength, and muscle fiber cross-sectional area in men and the results were downright striking.

They found that when they fed collagen to lifters, they showed a significant increase in fat-free mass compared with the placebo group, only the fat-free mass wasn't muscle – it was a type of integrative "building material" known as "extracellular matrix material," or ECM.

ECM coats skeletal muscle and it accounts for 1 to 10% of the muscle mass. It was first thought to be a separate structure that provides mechanical support for force transmission, but it's become clear that the muscle cells attach to and connect with the ECM and it provides a "permissive" environment for the development of muscle.

Clearly, the further nurturing of the ECM is a big deal.

The set-up for their experiment was simple and straightforward. They recruited 57 experienced male weightlifters and randomly and double-blindedly divided them into two groups, one receiving 15 grams of collagen peptides a day and the other receiving placebo.

All the men trained three times a week for 12 weeks, each workout consisting of squats, deadlifts, bench presses, bent-over rows, and leg extensions (this last exercise being included to test maximal voluntary isometric contractions, or MVIC).

After 12 weeks, the scientist recorded the following things:

See anything funny about the results? If you were paying attention, you'd see that the first point appears to contradict the last one. If both groups showed equal increase in cross-sectional muscle fiber area, how is it that the collagen group showed significant increases in lean body mass compared to the placebo group?

The answer has to do with "passive tissue components," i.e., the ECM that I referred to earlier. The ECM shows up on biometrical impedance testing as lean tissue, and it grew thicker, larger, and more able to handle the rigors of heavy training as a response to the lifting program and the collagen intake.

As to why the placebo group gained additional body fat, the scientists chalked it up as a mystery. The placebo they were taking only added 60 calories a day to their diet, so it certainly wasn't calorie related.

The clear assumption to the findings of this study is that the passive tissue components of both groups adapted to training as a physiological reaction, but it happened a lot more quickly and to a greater extent in the collagen group.

If you want to get all nuts and bolty about it, the researchers theorized the following:

"It's assumed that satellite cells of contractile muscle fiber cells are crucial for muscle repair and muscle fiber hypertrophy and can interact with myogenic progenitor cells in the surrounding ECM.

"Regarding this, a higher quantity of ECM, including higher numbers of fibroblasts, could have a regulatory influence on satellite cell activity and, therefore, muscle repair and muscle fiber hypertrophy."

If you lift, particularly if you lift heavy, you should ingest collagen daily.

If you want better joints in general and you want to strengthen your ECM to give your muscle additional mechanical/biochemical support for further muscle force transmission, you should take collagen.

You should also take collagen for the conventional reasons, like better wound healing, a better digestive tract, or even better hair.

The protein is of course available as a supplement and it's a largely tasteless, easily dissolving powder that you can add to coffee, juice, tea, yogurt, kefir, etc.

Alternately, you can ingest collage as gelatin, which is collagen that's been irreversibly hydrolyzed. And yes, while Jell-O is made of collagen, you can probably do without all the chemical baggage it comes with. Better to use unflavored gelatin, which, like its un-hydrolyzed form, is also readily available in grocery stores. Use it to make your own "Jell-O," or add it to soups and stews, pudding, or gravy.

And, if you're handy in the kitchen and don't mind playing the barbarian and making boiling cauldrons of animal parts, you can make bone broth, which is rich in collagen. Recipes on how to make it are all over the damn place.

All of that is too chancy and imprecise for me, though. I prefer using a powdered supplement. Most advocates of collagen supplementation, me included, recommend two rounded tablespoons a day, although one study found that amounts as small as 40 mg. per day can alleviate knee pain.

Note: One study found that taking collagen with 600 mg. of vitamin C increased collagen synthesis – and quite possibly muscle ECM formation – by 100% in as little as an hour, so if you're in hurry to fix up your infrastructure, pop a tablet or two of it along with your collagen. (Shaw, 2017)

The regeneration of cartilage and the ECM requires large amounts of the amino acids glycine, proline, and alanine, but it's glycine that's the true workhorse when it comes to growing more of these vital tissues.

Unfortunately, the bodybuilding protein powders most of us use don't have high concentrations of glycine or those other amino acids. Conversely, collagen does.

But don't even think of replacing your casein or whey proteins with collagen because collagen is shite for building muscle. Most prominently, it lacks sufficient levels of leucine and is completely lacking in a couple of other amino acids.

Instead, continue using your regular workhorse casein or whey or casein/whey blend and use collagen as a joint/structural supplement. 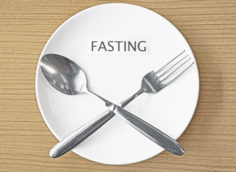 To be at your best, you need to understand the neurological components of performing under pressure.
Calm Down & Sleep, Motivation, Nutrition & Supplements, Tips
Christian Thibaudeau March 29

Tate's here to school you on the finer points of bulking and cutting. Get the details on getting jacked and shredded.
Diet Strategy, Feeding the Ideal Body, Nutrition & Supplements
Nate Green & Dave Tate August 23