Are you one of those granola types that won't eat anything with a face? Or are you a flesh-eating machine that would wolf down just about any animal that doesn't wear a flea collar?

Regardless of your position on meat versus plant-based diets, if the end goal is to look good naked, you likely take some type of essential fatty acid supplement.

Flax oil and fish oil are the most often consumed essential fatty acids – many will use the terms flaxseed oil and fish oil interchangeably – but the two oils aren't the same. Not by a long shot.

While both oils are rich sources of omega-3's, there are major differences that go beyond the fact that flaxseed oil is vegetarian-friendly while fish oil might cause your vegan neighbors to picket your lawn.

Let's first cover a little EFA 101. The two primary essential fatty acids (EFA's) are omega-6 and omega-3 fatty acid. They're considered essential because the body can't produce them independently. They must come from the foods we eat.

Adapted From Fats that Heal, Fats that Kill by Udo Erasmus

According to research by Simopoulos, the typical Standard American Diet (SAD) consists of about 20 times as much omega-6 as omega-3. Compare this to what scientists have determined to be the ideal omega-6 to omega-3 ratio of 2:1 and you can see that the SAD is just that, sad!

There are three reasons why most have such a dysfunctional ratio:

That third point is the knuckleball: is flaxseed oil getting the job done?

Flax Ain't All That

Twelve years ago I was studying the effects of fish oil when a trainer at my gym complained to me of excessively dry hands in the wintertime. His hands looked like they were covered in paper cuts, some so severe they were bleeding. When I asked him if he was taking any omega 3's, he said he was taking three tablespoons of flaxseed oil everyday.

Referring to what I'd been reading at the time, I suggested that he replace the flaxseed oil with fish oil for breakfast, lunch, and dinner. And the result? In just a matter of days, his hands completely healed – no cracks or bleeding.

So why couldn't flax do the job?

Sure, flax is one of the richest plant sources of α-linolenic acid (ALA) at over 50% ALA. For this reason, flaxseed oil is often touted as one of the best forms of omega-3.

The issue is flaxseed's inability to convert to the real players in the body. Flax oil is simply ALA, which is a precursor fatty acid to the magic eicosapentaenoic acid (EPA) and docosahexaenoic acid (DHA). But just because flax increases ALA in the blood doesn't mean your body will convert ALA to EPA and DHA.

As confirmation, a study showed over a twelve-week period that flax oil didn't convert efficiently to DHA. Another showed that in a four-week period, EPA concentrations achieved with flax oil were half that of when fish oil is used.

The lack of conversion of ALA to EPA and DHA is due to competitive enzyme inhibition. Referring to the fatty acid flow chart below, there are a number of intermediary steps that occur before ALA is converted to EPA and then to DHA.

A very important enzyme called delta-6-desaturase (D6D) is needed for this conversion to take place.

Research suggests that as we age, D6D decreases. While we can't do much about the numbers on our birth certificates, it should be noted that diabetes, trans fat, alcohol, and radiation have also been indicated as causes for the drop in D6D.

If you're a T NATION regular you already know the importance of blood sugar control, so diabetes is likely not a concern. And if looking good naked is remotely on your agenda, your trans fat consumption is probably minute and your alcohol intake well below Lindsay Lohan levels.

As for radiation, well, it's everywhere. There are ways to minimize it, such as opting out of the backscatter at the airport in favor of the pat down.

There are also several key nutrients that you can supplement to help build your D6D capabilities, including zinc and magnesium. Most of us are deficient in these two super minerals, which are crucial for many aspects of overall health.

But when the fatty acid rubber hits the road, we take omega-3 supplements to accomplish one thing: increase our EPA and DHA levels, and fish oils are EPA and DHA. No conversion required! Choosing fish over flax just makes sense.

A Second Chance For Flax?

While flax oil may not be an efficient means to obtain EPA and DHA, there are still benefits to taking flaxseed.

Flaxseed comes in three forms: whole flax, ground flax, and flax oil. I prefer clients eat whole flax or ground flax, as both are excellent sources of fiber. This helps keep the pipes clean and aids in blood glucose control, which can lead to lower body fat levels.

Whole flaxseed also contains lignans, which have been shown to affect estrogen levels. Many of my male clients arrive at my door with symptoms of high estrogen, and when I run hormone panels on them, upwards of 90% come back showing elevated estradiol.

There are two primary reasons for this. Number one are estrogen-mimicking compounds found in the environment called xenoestrogens. We're increasingly being bombarded by xenoestrogens from contaminated food and water, to chemicals like pesticides and herbicides as well as plastics that contain bisphenol A. The nasty thing about these ubiquitous little monsters is that they alter the conversion of cholesterol to steroid hormones.

Reason number two is the high activity of the enzyme aromatase. Aromatase is an enzyme that converts androgens such as Testosterone(T) and androstenedione(A) to estrogen(E).

Remember all the hype about pro-hormones in the late 90's? Everyone had visions of raiding Mark McGuire's locker and getting jacked-up to Big Mac's proportions. Unfortunately, this is a prime example of something looking good on paper but failing to translate in the body.

The major problem with androstenedione was that it could convert to T or E. So while some guys were getting bigger and stronger like they were on the real stuff, others were growing boobs and asking their training partners if their Zubaz pants made their butts look big.

Regarding aromatase, this is where the lignans in whole flaxseed come into play. Flax seed is the highest source of the plant lignan secoisolariciresinol diglucoside (SDG0), a type of phytoestrogen that's similar in structure to endogenous sex hormones.

Once ingested, the bacterial flora in the colon metabolizes SDG to enterodiol (ED) and enterolactone (EL), which are commonly referred to as mammalian lignans. There's research showing that ED and EL both inhibit aromatase.

So while I don't recommend taking flax oil for the omega 3's, I would recommend eating flax in ground form or even the whole seed to inhibit the effects of aromatase.

Get Your Threes In Order!

In today's world of Frankenstein food and toxic fats, making omega 3's a top priority is smart – but choosing flax oil to do the job isn't. Whether your goal is to gain muscle, lose fat, or increase performance, an animal source of essential fatty acids like fish oil is way more effective than flaxseed.

Try using a high quality fish oil supplement like Flameout® to fulfill your EPA-DHA requirements while adding some high fiber whole flaxseed for its glucose control and anti-aromatase benefits.

While doing so may not help land you any vegan girlfriends, with more muscle, less fat, and better overall health, I doubt you'll have much trouble finding some lucky fellow meat-eater to keep you company.

The science of the ripple effect, plus some controversial research on why couples either get fat or stay lean.
Diet Strategy, Feeding the Ideal Body, Nutrition & Supplements, Tips
Chris Shugart March 18 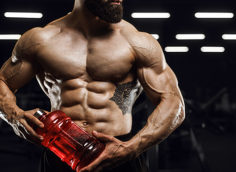