In the beginning, God created the heaven and the earth. Later, He formed man of the dust off the ground and breathed into his nostrils the breath of life. He told Adam to lift heavy rocks and logs and turn his body into a temple. He saw that this was good. With Adam in shape, He also saw that it could lower His employee insurance rates. Also good.

One day, Adam noticed that there were no chicks in the garden, so God whipped him up one and called her Eve, which literally means "first babe" in Hebrew. Eve was cool, but one afternoon while Adam was watching "Battledome," she brought him a piece of fruit from the tree of knowledge and used her womanly ways to convince him to eat it. Suddenly, a voice boomed from the heavens, and God said:

"Don't you know that fruit is just nature's sugar? If you eat it, you'll get fat from all of the fructose!"

Since God would not have any chubsters in his paradise, he booted Adam and Eve out of the Garden of Eden. In fact, fruit is so bad for you that some time later, God wrecked the entire town of Sodom after hearing about all of the "fruits" who lived there.

See? Fruit is evil. Even the Bible says so! At least, that's what the anti-fruit brigade would have you believe. Well, I'm here to play the serpent and tell you that bodybuilders and athletes should make fruit a regular part of their diets. Not only will it not make you fat, you'll probably see better progress in your muscular gains and overall health by chomping down on an apple or banana a day!

Revelation: Fruit Isn't So Bad After All

Let's take a look at why fruits have been unjustly bashed by many fitness experts. Basically, it all comes down to fructose. Fructose is the main type of sugar found in fruits, but it's utilized differently by the body than other sugars.

Normally, when a sugar – especially a monosachharide – is ingested, blood glucose begins to rise (glucose can also enter cells without insulin, such as after exercise, but that's another story). The body then senses that blood glucose levels are too high and, since it can't simply expel the glucose, it stores it in muscle and liver tissue for later use. This brings the blood glucose back down – too low, actually – which accounts for the "bonk" (feeling of lethargy) that you get after a so-called sugar rush.

Glucose gets inside of muscle by using a special key. That key is insulin. Insulin binds to receptor sites and allows glucose to pass into the muscle cells. This sounds like a good deal, but here's the catch: insulin also acts as a key to store glucose in fat cells. Hence, the low-carb diet craze, the popularity of the glycemic index, and the oft-irrational fear of fruit and fructose.

Based on the facts above, these nutrition experts often label all sugars, including fructose, as "bad." In effect, they're throwing out the baby with the bathwater. Here's why. Fructose is an insulin-independent monosachharide. This means that it converts into glucose and is stored without the action of insulin (or, at least, insignificant amounts). Fructose doesn't cause a large rise in blood sugar and, consequently, won't raise insulin levels. In short, you won't crash, and energy levels should remain on an even keel.(1)

So, from where does this "fructose gets you fat" myth derive? It's likely that the "experts" took the research on rats too seriously. If you feed Mickey Mouse a large fraction of his bodyweight in sugar, any sugar, then of course he'll become insulin-resistant and his bodyfat will increase. In fact, every study that I've seen showing negative results used astronomical amounts of fructose. Even then, the effects weren't as bad when compared to the overconsumption of glucose.(1)

For you to experience any negative effects from fructose, you'd have to consume around 50-75 grams in a sitting. That's equivalent to eating five to seven apples, one after another. You'd have to eat three or four of these "servings" a day, for a grand total of 15-28 pieces of fruit! As they teach us to say in college...well, duh! If you eat too much of a sugar – or anything, for that matter – you'll get fat.

In fact, fructose has been shown to facilitate both mobilization of endogenous lipid stores and lipid oxidation. For those of you who don't have a medical thesaurus handy, this means that getting a little fructose in your diet might actually help you lose fat.(2) It's even been noted that fructose causes a superior thermic response when compared to glucose or sucrose. The thermic response caused by glucose diminishes with age, but that's not the case with fructose.(3)

Of course, I should mention that fructose has been shown to be lipogenic in a few studies. But, in almost every case, the patients were bedridden in a hospital, suffering from a variety of metabolic disorders. Suffice it to say, bodybuilders seeking to pack on a little more muscle are different from hospital patients.

What about increasing blood triglycerides? Again, those results only appear after large (and rather insane) doses of fructose are administered. Even then, xylitol (a sugar alcohol used in some MRPs) was shown to increase triglycerides more than fructose.(4)

Another faulty argument used by the anti-fructose crowd is that when you ingest fructose, your body magically stops burning fat and switches to glycogen as fuel, thus preserving fat stores and turning you into a chunky monkey. If this were true, then it would be easy to find studies showing decreased lipolysis and exhausted glycogen stores. Guess what? There aren't any.

In studies using male athletes, both at rest and during exercise, the exact opposite has always been shown. Glycogen stores were always preserved when compared to other sugars or placebos, which means that fat was being burned at a greater percentage.(2,5) Fructose maintains blood glucose and increases fat utilization.(6)

Let There Be Light!

Hopefully, I've convinced you that fruit and fructose aren't the sole cause of the downfall of Western society. (Everyone knows that the real culprit is the purple Telletubby with the purse, right?)

In fact, I'd go so far as to say that they're beneficial to your bodybuilding efforts. For example, there's research supporting fructose's protein-sparing effects. The study showed that fructose spared protein while keeping blood sugar levels about the same.(7) It was hypothesized that this occurred because of increased protein synthesis.(8)

Need another reason to throw a few strawberries into your favorite MRP? Well, fructose was also shown to increase the absorption of a few important minerals, like zinc and magnesium – yep, the same two minerals that make up ZMA and support natural testosterone levels. Plus, fructose is sweeter than most other sugars without all of the previously mentioned drawbacks. In fact, it's even become the preferred sweetener of many diabetics.

Adding some fruit to your diet will also provide you with vitamins, minerals, phytochemicals, certain flavones, and fructooligosaccharides. Phytochemicals and flavones can provide astounding anti-carcinogenic properties, as well as lowering some blood fats.(11) Oh, yeah, when compared to all of the tuna fish, egg whites, and oatmeal that bodybuilders eat, just plain fruit tastes good! Even on low-carb plans like the T-Dawg or Anabolic diets, you can still have an occasional piece of fruit. Remember, a cup of strawberries or a medium-sized peach each have only about ten grams of carbs.

Fructooligosaccharides – a true five-dollar word, if there ever was such a thing – also provide some interesting benefits. Fructooligosaccharide is a soluble fiber that's 0.4-0.6 times as sweet as sugar, yet it can't be digested.(12) It can even increase the bioavailability of certain minerals, unlike the "bad" mineral-binding phytates.(13) They've also been shown to have an anti-lipogenic effect. In English, this means that they decrease fat production, probably by lowering glucose and insulin levels.(14,15,16)

Anything else? Yep, fructooligosaccharides can increase the amount of endogenous bifidobacteria in your colon. Bifido are the "good" bacteria that have been shown to increase nitrogen utilization and decrease excretion of certain amino acids.(16,17)

Although all fruits have a relatively low glycemic effect, some vary rather significantly in their GI, probably because of the fructose:glucose ratio and the amount of fiber contained within the fruit. Below are just a few fruits that can be consumed and what times are best to consume them:

Early in the day

Later in the day (after 6pm) and possibly post-workout

* Because of higher tryptophan levels, these may be helpful in inducing sleep.

The fruits consumed earlier in the day generally have a low GI (below 50) as to keep blood glucose at a more even level. The fruits labeled for use after 6pm, or after a workout, generally have a higher GI (around 70 or more) in order to rapidly restore glycogen levels and induce a state of sleepiness. This is especially true in the case of bananas and figs.

You might even try consuming five different fruits per day. This will give you all of the health protection that you need, and you'll still keep your carbs low, as long as you don't go hog wild on the dumplings.

Will an apple a day keep the doctor away? Well, maybe. But hopefully, I've convinced you that fruit and the fructose that it contains aren't quite as evil as some make them out to be. So, the next time your "Eve" offers you an apple, take it, and eat up! 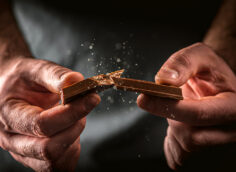