Do you see how this can get confusing?

I’d like to tackle saturated fat in this article as it has the most jaded history.

Saturated fat is deemed such because it’s fat that it is full, or saturated, with hydrogens while monounsaturated and polyunsaturated fats have “open spaces” that aren’t filled by hydrogens. 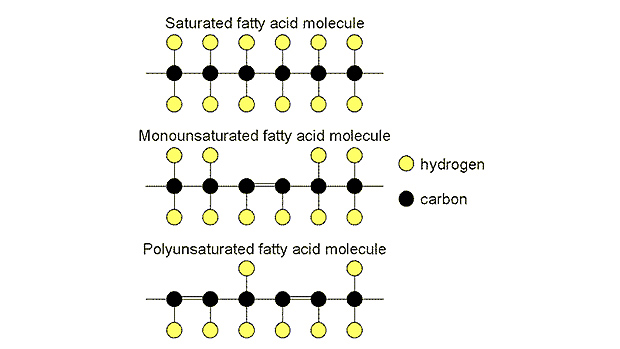 As previously mentioned, fats can also come in different lengths. The saturated fats mainly found in coconut oil, lauric acid, are shorter in length than the stearic or palmitic acid commonly found in meats and other plant products.

Coconut oil is very interesting as it’s gained a reputation of being the “good” saturated fat with potential benefits ranging from antimicrobial to cardioprotective. I’m personally not convinced of the magical properties of coconut oil but do regularly use it in my meal plans (as it tastes great).

Why does Saturated Fat get a bad rap?

Below is a figure from the 2005 Dietary Reference Intake report that shows this relationship. As mentioned before, lauric acid (found in coconut oil) may have certain benefits over other saturated fats. Grudy et al(1) showed that compared to palmitic acid causes a smaller increased in LDL cholesterol. 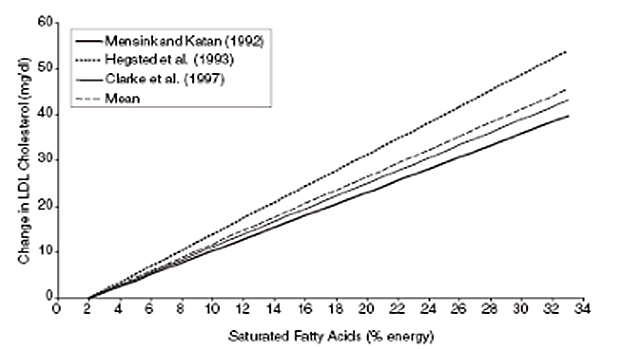 Saturated fat not only increases LDL-C but it increases HDL-C (as well). In fact, saturated fat has been shown to be a key component in maintaining elevated HDL-C levels as studies have shown that when replaced with unsaturated fat or carbohydrates, HDL-C will decrease.

If things couldn’t get more confusing, a recent study in the American College of Cardiology showed the increased levels of saturated fats potentially inhibit the anti-inflammatory effects of HDL-C(2). Increased intakes of saturated fat have also been correlated to increased rates of colon cancer.

The Benefits of Saturated Fat

This meal plan is about 3,700 calories with 27% of calories coming from fat. But only 6% of the calories are from saturated fat. This is definitely on the low side. Even the National Cholesterol Education’s set’s the upper limit for saturated fat intake for people at risk of CVD at 7%. As a healthy, active, weight pumping individual you can afford to eat more saturated fat as it may raise your Testosterone levels.

So will eating more saturated fat increase your Testosterone levels? Male vegetarians have been shown to have lower levels of plasma Testosterone compared to their meat eating counterparts(4).

From this data it’s hard to determine whether or not it was the total fat or saturated fat that made the difference between diet groups because the high fat diet group consumed ~20% more calories from fat with ~10% of that being from saturated fat.

Previous work by Keys et al(6) found a correlation between higher levels of Testosterone and increased intake of polyunsaturated fat, so that’s something that should be considered.

The above studies have all been longer term (6-10 weeks), controlled feed studies, but there’s an acute treatment study that actually showed a 30% decrease in total and free Testosterone following a high fat meal. In this study(8), 8 men were given a shake contains 18 grams of protein, 50 grams of fat, and 67 grams of carbohydrates. Their blood was measured every hour for 4 hours.

It should be stated again that this study contained a small sample size but the results do suggest that it’s not hormonally beneficial to consume large amounts of fat in one sitting, but rather spread it out across the day. Of course, I’m sure most of you aren’t consuming 1/4 Cup of olive oil or 1/2 a stick of butter in one sitting (at least I hope not!).

Unfortunately, the researchers never stated what types of fats were found in the shake as this would have been useful information.

The final two studies that we will look at are probably most relevant to the T-Man. This study enrolled 8 strength athletes and 10 active non-athletes(9).

Upon comparison of the subject’s dietary analyses and blood tests, it was found that only the strength-training athletes had significant correlations between fat intake and Testosterone levels. That means, if you lift weights and eat a diet higher in fat, then you’ll receive the benefit of elevated Testosterone levels compared to if you were just “active” and ate a higher fat diet.

Unfortunately, again, the sample size is small. As a side, the researchers also found a negative correlation between protein intake and Testosterone levels (i.e. consuming too much protein leads to decreased T). 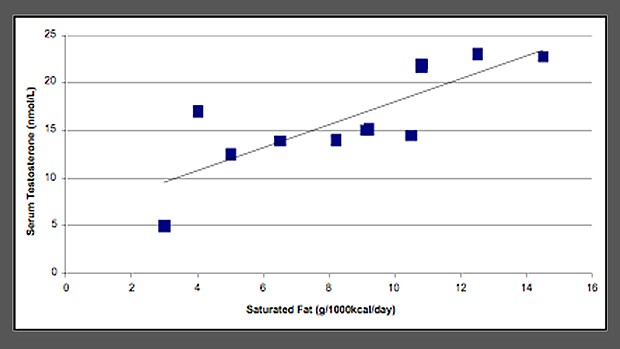 So beware of having too much of a good thing. Volek et al(10) conducted a similar study in which they compared the dietary records and blood tests of 12 men with at least one year of weight training. The researchers found significant correlations between Testosterone levels and total and saturated fat intake.

After reviewing the literature and studies presented in this article, one can’t say that increased consumption of saturated fat definitively increases Testosterone levels, but it may, especially in strength training individuals. It’s evident, though, that a higher total intake of dietary fat (30-35% of calories) does increase Testosterone levels compared to a low fat diet.

So grab an avocado, slather it with butter and enjoy!