If adding certain pharmaceutical-like foods to enhance health, physique and performance sounds attractive to you, also check out Chapter One (Fruits and Veggies).

Beans are not just the "musical fruit" and nuts are not so nuts. Although we need to consider the presence of "anti-nutrients" and species differences when reading bean-related studies–along with being wary of allergy triggers regarding nuts–there's so much potential benefit to these foods that they're deserving of a second chapter in our mini-text on functional foods.

As is typical, timing is a key. Beans and nuts aren't favored for peri-workout (pre-, mid-, or post-) nutrition for a number of reasons ranging from potential allergic responses, slow bloodstream entry and barely adequate protein quality (beans lack methionine, making them an "incomplete protein" source when eaten alone) to factors that retard the digestibility of other proteins. For example, casein digestibility is reduced by up to 25% by bean phytate.(12) For many of us though, other times of day present a real bean-and-nut-related physique improvement opportunity.

How concerned should we be about anti-nutrients like lectins and trypsin inhibitors in beans? Not extremely, especially when rinsed, soaked and cooked thoroughly.

"[beans have] lectins, amylase, and trypsin inhibitors, that may adversely affect their nutritional properties. [But] Much information has already been obtained on their anti-nutritional significance and how to inactivate them by proper processing. Chronic ingestion of residual levels is unlikely to pose risks to human health."(11)

And let's not forget that many beans have a bottomed-out glycemic index in the 14-44 range.(16) That's some slooow blood sugar action, my friends. Even the carb-paranoid should become interested in beans. As I'll show you later, beans address many of the reasons that low-carb dieters avoid carbs.

Afraid of gassy side effects? Although controversial, some beans seem to be easier on the old methane factory sitting in your bowels. Some say lighter colored beans are a good start but I've seen little evidence for this. Proper soaking followed by discarding the soak water, followed by boiling in new, fresh water helps remove perhaps a third of the gassy substances. Slowly increasing beans in the diet (bean adaptation) is also controversial, but starting with a half-cup serving of beans and using an alpha-galactosidase product like Beano does wonders for some people.(4)

Overall, the many benefits of beans, including truly tons of fiber and functional food properties, should indeed whet your appetite...

This entry may indeed be the hallmark functional food of this lineup. Amazingly, kidney beans appear to be unique in that they have been shown to decrease body fat and increase relative muscle mass in animal models.(5, 17) No kidding. Here's a quote:

"Long-term consumption of diets containing low levels of kidney bean significantly altered body composition of rats. The levels of lipid in the body were significantly reduced. As a result, carcasses of these rats contained a higher proportion of muscle/protein than did controls" (5)

This interesting effect may have something to do with the bean's capacity to increase (mostly larger, fast twitch) skeletal muscle insulin sensitivity. Research suggests that both insulin receptor mRNA and glucose transporter (Glut-4) mRNA rise pretty dramatically after eating kidney beans!(10) Of course, a rise in messenger RNA suggests that said receptors and transporters will soon take shape. And due to the potential for temporarily-reduced nutrient availability/feed conversion (i.e. food becoming body mass), I immediately start thinking about dieters. Losing fat, or preventing its gain, while maintaining lean tissue is one of sports nutrition's holy grails.

Still not interested? Apparently, kidney bean lectin, although a little scary, looks promising enough for researchers to consider it as a "therapeutic agent to stimulate gut function and ameliorate obesity if a safe and effective dose-range can be established for human subjects."(17)

I definitely wouldn't plan on supplementing with any amount of toxic lectins, to be sure (if you could even find them), nor would I try to use beans of any kind to replace my whey/ casein/ meat/ egg protein intake. But simply eating some well-soaked and then boiled kidney beans as a side dish each week? Yeah, I could do that.

For soaking times (several hours; like overnight) and boiling periods (which vary), follow directions on the bag or in a cook book (or a trusted Internet recipe site). Of course, people generally don't eat beans raw, so the lectin effect is relative. That is, cooking degrades it. But lectin or not, the overall cornucopia of nutritional bonuses available in prepared kidney beans, from decent protein to lots of fiber, to a slow entry into the bloodstream, to potentially beneficial lingering phytochemicals, makes them a worthy functional food in my eyes. 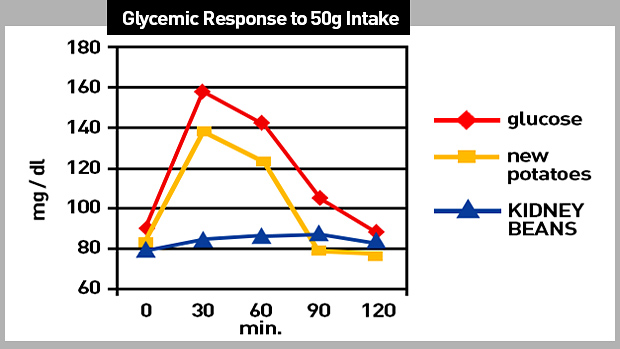 Perhaps a final note on safety is called for. Research also suggests that kidney beans don't have the longer-term, wacky effects on pancreas size that beans like soy do.(6) Remember that we're after all just talking about beans. After reviewing the literature, I admit that I went out and bought some to bolster the kidney bean content of that bag of dried mixed beans that's been in my cupboard for a while. Time to get huge and ripped! (Uh, or at least take a half-step closer.)

Like tuna (uh, not together), peanut butter has been reported to have insulin potentiating effects (9), thus making it similar to spices like cinnamon in this regard. And let's not forget the protein, monounsaturated fats and bevy of other physique-boosting nutrients it contains.

Lifespan-enhancing resveratrol is in peanuts as many of us now know. The uncommon "plant-source" omega-3 fat, linolenic acid, is found plentifully in walnuts. Almond-based low-cal diets have been shown to reduce waist girth and fat mass better than complex carb–based low-cal diets (waist -14 vs. -9%, fat mass -30 vs. -20%).(20) Who says foods can't act like drugs? I probably don't need to go on but I will...

Protein? Check. Satiety and fullness? Check.(1) Fiber? Check... and fiber can be a scarcity with some low-carb diets. What about serum cholesterol and blood pressure benefits? Right again: Check!

Unless you're allergic or have some kind of intolerance, most of you should have mixed nuts on your end table as evening TV munchies. I personally also indulge, on occasion, in some natural peanut butter on light, 100% whole wheat bread and a protein shake. This snack offers good portability for work or school. I also often have a small can of mixed nuts, sometimes with self-added walnuts, in the car for hunger emergencies and as a preemptive strike against fast food temptations.

Remember that aflatoxin contamination in peanuts is less a concern than lipid damage from microwaving them.(3,14) The bottom line is that it's become obvious: we weight-trained men should be proud of our nuts.

These are a real two-edged sword. A basic premise behind certain hopeful growth hormone-releasing dietary supplements is the fact that beans like faba, a.k.a. "broad bean" (Vicia faba) and "velvet bean" (mucuna pruriens) contain L-dopa.

The truth is, they do...to the tune of 125 mg per 40 g freshly chopped fava beans.(19) (Apparently Velvet bean is even higher but it's not widely consumed as food, and has been linked to itching and even toxic psychotic episodes,(2, 8) so I won't discuss it here.) The L-dopa content is even enough to help Parkinson's patients. Since L-dopa indeed stimulates GH release (among other things), this remains an interesting concept.

Other potential benefits of eating broad beans include blood lipid-lowering and anti-carcinogenic effects (13) as well as natriuretic (sodium-excreting) and diuretic effects.(19) Bonus!

Still, fava beans are a classic (even extreme) example of both the benefits and risks associated with beans as functional foods. Not only are there concerns over meddling with neurotransmitters and a serious contraindication for those using MAO inhibitor drugs (due to tyramine content in faba pods) (18), but certain people, notably Orientals, Blacks and Mediterraneans (e.g. Italians, Spaniards, Greeks) are at increased genetic risk for a hemolytic (that's "blood cell breakdown") condition called favism.(7)

Would I personally eat fava beans? Yes, I think my Irish butt can handle them, but I wouldn't eat them in huge amounts or very often, particularly until I knew I didn't have a bad reaction. I've got to admit though, a well-placed GH surge and a little physique-tightening diuresis is intriguing.

For women, soy may actually reduce body fat. Fairly new research on female rats shows that it does just this–and at intake levels plausible to humans.(15) Apparently there's an anti-lipogenic (reduced fat gain) effect. Whether by way of modulating estrogen activity or something else, this is a pretty cool finding.

Despite concerns expressed over feminization of males lately, I still maintain that a little soy in the diet is okay for men since it's been shown to have benefits, including prostate shrinkage, blood lipid improvement, sometimes additional dietary fiber, a protein-rich, and low-carb replacement for carbs in snack chips, etc. I just don't overdo it and I'm certainly not about to go buy isoflavone supplements.

As I mentioned in Chapter One (Fruits and Veggies), pumpkin is a good thing. Did you know the oil from its seeds helps many aspects associated with chronic arthritis in lab animals–even edema? That makes my slightly stiff lower back feel better already. And the beta carotene, along with other carotenoids and phytochemicals does a stressed performance-driven body a favor.

Okay, so let's see what we've got going for us in this roundup of functional foods. Hmm. Yep, it looks like an extra-long life spent with a lean, muscular, normotensive, cosmetically "dry", cholesterol-controlled, pain-free body. Not too shabby. Of course, this assessment is a bit tongue-in-cheek but clearly the benefits are along these lines. Want to feel good about your diet? With a little prudence, go try one or two of these foods this week and get a half step closer to your physique goals. 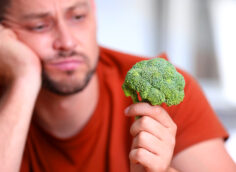 What do all the best diets for fat loss have in common besides calorie reduction? Well, they're kinda boring. Here's the surprising science.
Diet Strategy, Feeding the Ideal Body, Nutrition & Supplements
Calvin Huynh February 27 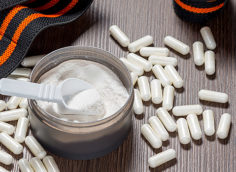