Training with a specific goal in mind will increase your level of dedication and effort. But that goal must be realistic and, more importantly, conductive to both short and long term success.

Thanks to social media (where everybody wants to be a star) and the multiplication of classes in physique sports – they now have the "wellness" class for God's sake – it seems like everybody wants to do a show, but here's the truth: Few people have business doing a show.

Doing a show can limit your gains and lead to serious psychological issues. A young guy came to me to train him for a bodybuilding show. I like the guy. He's passionate about training, trains super hard, and is very smart. But he's only a not-so-lean 160 pounds and about 5'10". He looks like your average young gym rat. He doesn't stand out among the average Joes in the gym.

Here's the thing: if you're not even the best physique in your gym, or at the very least among the top three, why are you even thinking about competing? You shouldn't. Unless you very clearly stand out in your average-bro gym, you have no business competing in a sport that compares the best physiques from many gyms.

Dude, being 140 pounds ripped at 5'10" is not bodybuilding. Yes, you'll have lines and definition but the whole spirit of this activity is to be lean and muscular. Not thin.

"I'll do a steroid cycle for the show."

Listen, I'm not against drugs. But if you've never used them before you began thinking about a show, you're crossing a line you can't come back from. You're wanting to do something that could have health consequences just so you can do a show? That fact alone tells me that you have no business doing a show!

And steroids aren't magic. Yes, they'll help, but taking them to prepare for a show will actually limit your gains because you're dieting down. They'll help you preserve muscle mass and probably add some since it's your first cycle. So instead of being 140 pounds ripped, you'll be 150 ripped. Big deal. You'll still have no business on stage. Be realistic.

Doing a physique show isn't something you decide to do lightly because it can have consequences. I know plenty of people who developed eating disorders because of a contest prep. Your social life will take a turn for the worse. Your love life could very well be affected (I know several friends of mine who broke up because of a contest prep) and many can suffer psychologically after the contest.

Either you hurt yourself physiologically trying to stay in contest shape year round once you achieved it, or you suffer psychologically because of the weight regain. I know a ton of people who ended up looking worse a few months after their show than they did when they started out. Can you imagine the psychological distress once you've seen yourself super lean?

If you have the potential to be a good competitor, go for it! I trained a girl with the only goal of getting leaner and after a while it was clear she had potential. Great leg separation, superb back, good abs. She had what it takes to compete and win. When she came up to me asking to compete I told her to go for it.

But I also turned down many people I know didn't have what it takes yet. Maybe someday they will. But building the amount of muscle needed to do well in bodybuilding or figure takes time. If you don't have it before you decide to do a show, it won't magically happen during that preparation.

Some people love contest prep. But for others it's hell and makes them want to stop training. Some bodies handle the rigors of a preparation fairly well; others will have bad consequences (even when natural). I know girls who had long lasting estrogen and thyroid issues after a contest and guys who tanked their testosterone and suffered from erectile dysfunction for a many months.

Unless it's obvious that you have all the tools to do well, please don't do a show.

Training hard is awesome. Controlling your diet to get the body you want is awesome. But things can get out of hand fast. Here's how.
Motivation, Opinion, Strong Words, Tips
Chris Shugart December 13
This is part one of an article about Chris Shugart and Cy Willson's trip into Mexico to check out the steroid scene and bordertown culture.
Living Better, Pharma, TRT
Chris Shugart July 27 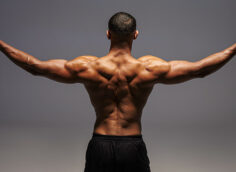