The Tragic "Lack of Curling" Epidemic

If you've been around weight training for any length of time, you've probably read or tried an arm specialization routine. There are a bunch of these around with different cool names for what amounts to the same old shit: do a bunch of arm exercises. Yeah, the exercises change and the sets and reps change, but it still amounts to just doing more arm work.

I have a fundamental problem with this. Do you really think that the reason most guys don't have big arms is purely because of a lack of doing curls? Do we really have an epidemic of biceps curl deficiencies in gyms around the world? Is Johnny really saying, "Duh, flex my elbow a bunch of times? Best...program...ever."

And we've all complained about the guys who do curls in the squat rack and never get anywhere. Yet as soon as one of the popular gurus writes an arm training article, we jump right in. (As an aside, I hate "gurus." In my mind there are only two gurus worth listening to – Yoda and Mr. Miyagi, neither of whom have ever written an arm training article.)

The Real Solution to Puny Arms

My approach to lagging body parts is to look beyond the obvious and try to come up with a real solution to the problem. The key to increasing a trainee's biceps size depends on his ability to handle heavy loads in the barbell curl.

So if you can handle heavier loads in the curl, you will grow bigger biceps. That much is a given. And if just doing more curls isn't the best strategy, then what is?

Which exercise can you handle the most total weight on?

If you're like most people, you probably answered "A" followed by "B," and you left "C" for last. This difference in poundage is largely due to the proximity of the load to your body. Simply put, your ability to curl a heavy weight, a precursor for arm size, is dependent upon your body's ability to support that load out in front of you.

Think of the Leaning Tower of Pisa. If I were to build a platform that stuck out from the middle of the tower (like your lower arm from your torso during the midpoint of a curl) and started piling load on it, how long do you think it would be before the tower would buckle and I could collapse the whole thing? Not long.

Your body works the same way. At a certain load, the tower (your back and torso) would buckle. The only difference is, when there's a risk of injury to the spine, your body will shut down the prime mover (in this case the biceps). Your body won't allow that load to get heavy enough to injure you if it can help it.

Why? Because your body is more concerned about protecting your spine than it is about growing massive guns. As wrong as this fundamentally is, we have to go with it. The longer the lever arm, i.e. the further away from the body the load is, the greater the torque through the spine.

Taking this a step further, can you curl more weight standing on two feet or on one foot? Obviously with two feet because you have more support. More support gives you the ability to handle greater loads. Greater loads gives you the ability to grow. The key outcome we're looking for in this program then is to create a support structure for the body so that when we return to direct arm training we can handle far heavier loads.

So what follows is a program designed to improve your pillars of support: the upper back and posterior chain. Once you strengthen these areas, your biceps will blow up when you go back to regular arm training!

The "No Curl" Program

A) Snatch Grip Deadlift from box

The snatch grip deadlift is one of the biggest bang-for-your buck exercises you can do in the gym. Done correctly, this will strengthen pretty much every muscle in the body.

YTWLs are a shoulder stability exercise I was first exposed to by Mark Verstegen of Athlete's Performance. Lie facedown on a bench and perform each exercise for 8 reps non-stop, then proceed immediately to the next exercise:

Y: Raise the dumbbells up in front of you so that they end up in a Y shape in front of the torso.

T: Raise the dumbbells out so they're perpendicular to the torso (creating a T-shape)

W: Bend the arms to 90 degrees and raise and lower the dumbbells in line with the torso.

L: Holding the top of the W contraction, rotate your forearms down so your fists point toward the floor. Keeping your elbows perfectly still, externally rotate the dumbbells back to the W position.

There should be no rest between exercises! Use light dumbbells so you can maintain form. Ten pounds would be "very heavy" for this series of exercises.

The push-ups are simple enough, but the medicine balls will provide a stability challenge to the shoulder girdle and the core musculature. (Ha! Unstable surface training? Sacrilege!) This takes a simple horizontal pushing exercise and turns it into a total body exercise.

Lie on your back under an Olympic bar that's placed stationary in a squat rack just slightly beyond arms length. Grab the bar with an overhand grip and pull the upper body up to the bar so that the chest touches it. Keep the body completely flat through the entire motion.

You'll need to start with the bar in front of your chest which will put you in an awkward position when hanging, but it'll keep you in a good position throughout the whole range of motion. Once the exercise becomes easy, we can increase the training effect by raising the feet onto a bench or eventually a stability ball. Again, this exercise, although focusing on the horizontal pulling movement of the upper body, is by far a total body exercise.

This one has to be experienced to truly appreciate its effectiveness. If you want to train core stability, then lift heavy objects over your head! Use two dumbbells for this exercise – a heavy one and a lighter one (50-60% of the load of the first dumbbell). Taking a shoulder-width stance, hold the heavier dumbbell in your left hand by your side, and the lighter dumbbell pressed up over your head.

Now, maintaining an erect torso, squat down, keeping your body weight in the center. The offset load will create a large torque through your back and midsection. Fight your body's natural tendency to want to lean to one side!

Lie facedown on a mat or carpeted floor and rest your arms at your sides, palms down. Contract the muscles in your glutes and lower back so that your upper torso and legs come off the floor. At the same time, rotate your arms externally so that your thumbs end up pointed toward the ceiling. Keep a neutral neck alignment.

• Make a commitment to this program for a period of four weeks.

• Strive to increase the loads, with good form, as much as possible.

• Try to perform this workout once every five days or once a week if that's not possible.

• Remember, any weakness needs to be addressed first in the training week, so perform this workout on day one (Monday for most people).

• Now, usually this workout replaces regular arm work, although for psychological reasons I typically allow all my guys a ten minute EDT type of "free" zone where they can do whatever they want. They don't usually do anything as they're too fried, but they can do curls, extra crunches or whatever in that time.

But ideally, put the regular arm training on maintenance and focus on the support structure. (You can only improve one or two things at a time anyway.) A controlled ten minutes of arm work as described above will be okay, though.

• At the end of the program, feel free to go back to your old arm routine. You'll find that you're handling greater loads in almost every arm exercise. You know what that means? That means you're about to break a plateau in arm size!

Let's get our heads out of our asses and start to look for logical solutions to our training problems. That usually means ignoring current trends and hype. Hopefully this article challenges some of the dogma involving arm training.

Remember, scrawny arms are a "support system" issue, not a curling deficiency!

It looks crazy, but it'll build your delts and overhead strength like nothing else.
Tips, Training
Joel Seedman, PhD January 30 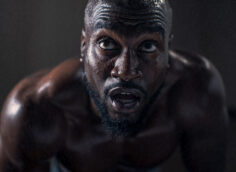 Some conditioning workouts can damage your tendons, ligaments, and joints. Here are the worst offenders, plus some better alternatives.
It Hurts Fix It, Metabolic Conditioning, Metcon
Dr John Rusin June 5

That which does not kill us makes us stronger... and faster, and bigger, and a hell of a lot tougher. Here’s how to use a pushing sled to get it all.
Fat Loss Training, Metabolic Conditioning, Powerlifting & Strength, Training
Joe DeFranco January 6

Love lifting heavy? Then you either have some shoulder issues or you soon will. Follow these 5 steps to get them healthy and keep them healthy.
Mobility, Powerlifting & Strength, Shoulders, Training
Chad Coy & TJ Kuster January 19