As I review my training journal for 2012, I see that I've been in the gym 160 times, during which time I lifted a total of over 1.6 million pounds.

That's a significant investment of time and energy, and it often leads those less acquainted with fitness to ask a very reasonable question: "Why?"

Before I tackle that seemingly simple query, I think I should first dispense with a very simple explanation of why I don't do it:

I don't lift because I'm great at it – that's for sure.

Now, this quickly becomes a matter of perspective of course – at age 53 and a bodyweight of 210, I can perform 15 chin-ups, a 405-pound squat, a 500-pound deadlift, and a number of other feats that weaker folks might consider very impressive. Impressive that is, until you learn how many years of struggle it took me to reach this point, and unless you're aware of the fact that there are many, many men my age and weight who are quite a bit stronger than I am.

Just to cite a few quick examples among my colleagues here at T Nation, Dan John has snatched 300 pounds and Mark Rippetoe has squatted 405 for at least 10 reps, maybe more by this point. Both these guys are my age, give or take a year or two.

To call my athletic beginnings "humble" would be an overstatement to say the least.

At the age of 16, after 5 years of impassioned martial arts training, a friend's sister unceremoniously pinned me in a backyard wrestling match, a few decades before Royce Gracie submitted a man nearly twice his size in the first UFC (7 years later, I finally received my black belt – an achievement that most karate students pull off in 3-4 years).

At age 19, when most guys are at or near their physical peak, I once got pinned by a 90-pound bench press – not pinned after the 20th rep mind you (although you'd be forgiven for making that mistake) – I got pinned on the first rep.

Physical weakness and the inability to win fights against girls weren't my only physical deficits, trust me. At age 21, I carried 140 pounds on a 6'1" frame and I had a gut on me even then, despite 3-4 grueling martial arts classes per week, along with 2-3 weight-training workouts and 1-2 jogging sessions as well. If anyone out there ever did more work for less gain, I'd sure like to meet him.

The answers to this question are both intuitively obvious to me, and yet at the same time a bit of a challenge to articulate. After quite a bit of reflection however, I've arrived at 3 primary reasons for why training has been a pivotal component of my life for the past 30 years.

1. Restoring My Confidence in the Value of Hard Work

In nearly every human endeavor, as a general rule, hard work (and yes, it needs to be "smart" work) pays off. However in many of our pursuits, it's easy to become disconnected, and therefore, distrustful, of the process.

For example, at work, office politics might derail your hard work at getting promoted. At home, numerous outside influences might offset your best efforts at raising happy, well-adjusted kids.

In the gym however, you can trust the value of hard, consistent work – the idea that when you do the right things, you (almost always) get the right results. And, if you do the "wrong" things, you'll get clear and immediate feedback, allowing you to make a quick course correction.

A former training partner of mine used to call the gym "the laboratory," because he loved the clear, cause-and-effect relationship between input and output – work, and the results of his work. You used to do 3 sets of 10, and it worked initially, but then you plateaued. You switched to 5x5 and started making progress again. Cause and effect.

In life, there's always cause and effect, but most of the time the relationship is fuzzy – it's often difficult to tell if your hard work is paying off or not. But in the gym, you always know. For me, this knowledge restores my confidence in the process, and inspires me to trust it in other areas of my life. 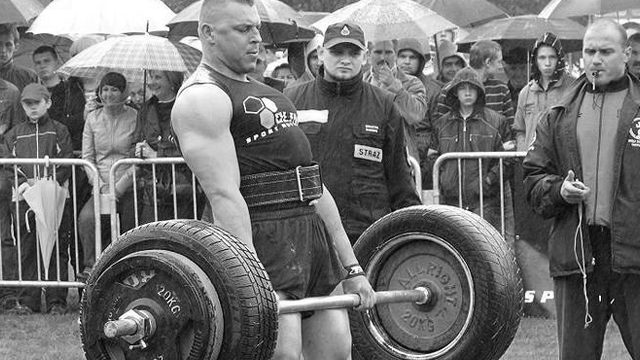 2. Pitting Myself Against an Absolute Standard

There's something about the quantitative, objective nature of lifting weights that really appeals to me. Whenever I won a match as a martial arts competitor, I could never be sure if I won because I was the best fighter that day, or perhaps because the judges weren't paying attention, or because the best competitors didn't happen to show up that day, or a host of other possibilities. While I absolutely loved the martial arts, I hated the subjective, "foggy" nature of competition.

Whenever you hit a new PR in the gym, however, there are no such lingering doubts. The very first time I ever squatted 400 pounds, it was clear to me that I was now better than I had ever been before (in that lift of course).

In other words, when your numbers improve, you can take it as an unmistakable sign that you improved. Your training worked, and you have irrefutable proof. No one can take it away from you.

My primary interest is strength, but this phenomenon holds true for other fitness qualities as well. For example, if you get a new PR on the 100-yard dash, or improve your best vertical jump, or increase your lean body mass by a pound, you know you're not the same guy you used to be.

While it's a nice stroke to the ego to know you've improved yourself, but it's actually much more significant than that – it's important to know that we're capable of real change. And no change is as visceral or as convincing as the changes we can make to our bodies through sound training and good nutrition.

Since I'm now in my 50's you might expect me to include something like, "To Delay The Aging Process," in this list. But in truth, it's much bigger than that.

Growing up as a kid, both my parents were frail and sickly (by my current standards, anyway). This is partly a reflection of the times of course – in the 60's and 70's, the general level of fitness across the adult population was low compared to today's standards. I can remember my mom, at age 40, taking a walk around the block, which took her out of commission for the next few days. My dad was slow and frail – although he lived to the age of 83, his general quality of life was poor, due (at least in large measure) to some of his lifestyle habits.

Watching my parents as a kid had a huge impact on me, although I didn't realize it on a conscious level until many years later. I determined that I was going to do everything in my power to have a body that could withstand anything and everything life could throw at me. I wasn't particularly interested in living till the age of 100, but I didn't want to become the victim of disease or disuse, and I sure as hell didn't want to have one foot in the grave at age 40.

Sure, any one of us can fall prey to cancer or an automobile accident – we certainly can't control all of our circumstances in life. But with that said, why not exert our influence over the ones we can control? Why would I want to be 40% body fat and have trouble walking a mile at age 50 when it's completely preventable?

And forget age 50! Every day I see 20-something's who are in such absolutely pathetic condition, they're unable to perform a single pushup, or walk a mile in less than 30 minutes. I don't look down at those who aren't in particularly good shape, but there's a certain line that we shouldn't allow ourselves to cross.

As I age, I recognize that I will inevitably experience a gradual decline in my physical performance, which is exactly why I'm working hard to accumulate a head start while I still can. I call this head start "margin." If walking around the block kicks your ass, you have low margin. It means that it won't be long before sitting still kicks your ass. And of course, when that happens, pretty soon you'll be dead.

Right now, deadlifting 400x10 kicks my ass. Doing 15 chins kicks my ass. But walking around the block? That's not even exercise – it's locomotion.

I should add a bit of self-disclosure here: I never really trained for health reasons, because I simply figured that if I was fit, I'd also be healthy. This isn't entirely true of course, but it holds up better than you might think. For instance, the more muscle you carry, the better you can withstand the negative effects of various "bad" foods.

For example, muscular people can ingest more sugar than their less muscular peers, because their muscle mass helps to mediate the effects of insulin. Also, strong people are generally "safer" than weak people, because they have the physical capacity to avoid or successfully negotiate physically traumatic events such as falls or fights.

As an aside, with the healthcare debate in full gear during the recent Presidential election, I'd like to remind you that while doctors are great at fixing things that have already gone wrong, in general, they're not very good at helping you to prevent things from going wrong in the first place. That's why I view my health as my responsibility, not the government's. And you should too.

Training As Preparation For life

All of the above adds up to a "bigger picture" rationale for training, which is that the gym is really a microcosm for life. It's a place where you can run highly-controlled experiments of one, over short-enough time-frames that you can reap the benefits of what you learn, and then (ideally) apply what you've learned in other areas of your life. And along the way, you develop self-confidence, self-reliance, and a renewed appreciation of the natural order of things in life.

It's been said that when you're a hammer, everything looks like a nail. I guess I'm guilty of that, because as an athlete, I look at life as an athletic event – an event I'd much rather win than lose. Life exposes you to certain challenges – some predictable, and others not – which you can ether prepare for, or not. For me, the decision is easy.

Add one drill to your warm-up and one exercise to your workout. Check 'em out.
Mobility, Tips, Training
Lee Boyce March 21

Pulling big weights requires getting strong in a lot of supporting muscles, starting with the upper and mid back.
Deadlift, Most Popular Deadlift Articles, Training
Tony Gentilcore August 29

You need more than 3 sets of 10 of your favorite triceps exercise if you want maximal growth. Here's what to do.
Arms, Bodybuilding, Tips, Training
Kurt Weber June 26